So if I take the top option we get:

+1 Morale which is really tempting because it’s free Morale and who doesn’t want that except robots.
2 civvies.
Raider activation which is 2 more civvies via Pursuit and 2 more Raiders on the CFB.
Basestar activation which will plop a Basestar on the CFB and jump all the Cylons here.
And a jump prep.

3 of these things are bad.

If I take the bottom option we get:

-1 Morale, which always sucks.
Basestar activation which will plop a Basestar on the CFB and give us 2 more civvies.
And a jump prep.

2 of those things are bad.

Also I’m like 90% sure rowe made of metal and wires so his placement of the civvies is either going to force him into a longer game or make him move earlier.

Right now I’m only BFF’s with rho but we’re about to see if Lantz is still cool or not.

So instead of being sucked in by the pretty + option, I’ll take the OR. It at least gives us a chance to leave before major damage is done, luck willing.

No, seriously, I’m always afraid of the opposite thing people are; it’s not like resources always drop what we expect.

@CraigM I will take Tactics on my turn.

Where is this coming from??

After years of playing these, we’ve gotten to where the Cylons don’t make mistakes and they’re hard to pick out.

Also, I have to pick on someone, and you’re the only ‘real’ Pilot, so obviously you’re one of them.

Basestar activation roll 5, pursuit +1. 2 civvies to be placed by the CAG @rowe33

Sorry, on Catalina Island for our anniversary! I’ll place them in 4 and 7-8. Figure I’ll be heading there to clean up space if someone can XO me beforehand, or my turn if still necessary. 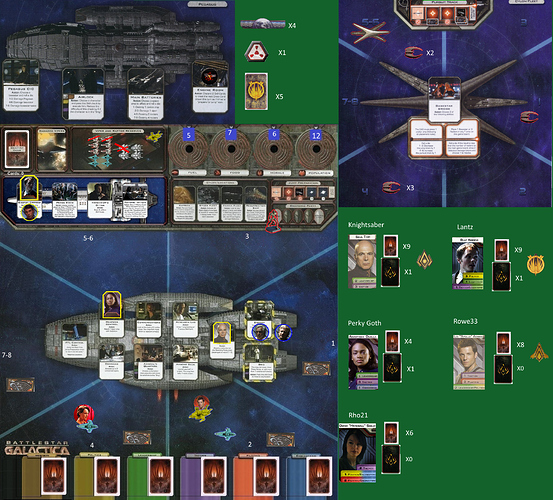 I will get to this in a couple hours. Sorry for the delay but I need to consider a few things that are a little hard on my phone

I would like to clear my mutiny but it is kind of a bad time.

I will dump a [redacted] to get a peek at the slots.

Are you moving or staying out and encountering the ally?

Are we playing where the brig clears both mutinies or just one?

I totally forgot that was a thing we did a few times.

Since we now have 3 people with Mutiny it’s probably a good thing to figure out.

Yea or nay to the above mod

As someone who once really wanted to abuse it, I’m inclined to say yes. Either way is fine, though.

No strong feelings for any of these plans.

I like this version. Seems to fit the spirit of the theme.

Also don’t forget that there are trauma tokens on sickbay and brig that you collect when you land on them. If it is a disaster (2/30) you are immediately executed.

I believe you get those at the start of your turn.

Okay, new plan, I will play Politics - 4PrP to save morale and see what happens with this encounter.

I think it’s worth the risk here. @CraigM

Edit - was going to delete this on the execution risk being next turn, not this, but on second thought a second do-over seems extreme even for me