I’ve been looking around for a couple weeks and it seems like this should be easily feasible, and would love to hear your recommendations:

There are seemingly a million options to achieve this and I’m open to anything from pre-built, to bare bones kits, to going fully custom build. Any particular recommendations?

Thanks for the pointer! I’ll take a look.

I’d suggest basing it on cheap Ryzen 3000/2000 with mini ITX or 2000 with integrated Radeon video if you don’t need discrete GPU for real-gaming. Does Quest Link need a real GPU?

If you were in Canada locally I’d sell you a new-in-box Silverstone SG05 spare case I have lying around. I also sold a spare node 804 I had but that’s mATX not mini ITX. Some of those smaller volume ones are bought from Chinese online marketplaces and can take a while to arrive but stuffing them is truly impressive. My June 2019 Ryzen 2700 build was in a more widely-available Fractal Node 304 mini ITX case.

Quest link just turns the quest into a traditional pcvr headset. So yes the PC will need to have an ordinary powerful CPU/GPU like all pcvr solutions need.

I’m aware of the usb cable issues. Just need to have a case with front ports which will work assuming everything else is in order. Description Included Resources Utilizing a PCIe riser to achieve an innovative back-to-back design, the A4-SFX is a modern and remarkably compact enclosure that's able to support enthusiast-grade components within a svelte 7.25L design. Highlights of...

Only one USB port on the front, but an awesome little case (yes, PITA to connect the wiring) that supports full size a GPU.

I just had an idea and wanted to get folks’ opinions here.

For right now all I want is a HTPC to replace my aging Alienware alpha. I’ve had it for 4 years and it’s served me well but it’s really showing it’s age.

So, what I’m thinking now is that I build my new HTPC with everything in it except a dedicated GPU. I’ll use an AMD CPU with decent integrated graphics for now. And then closer Alyx coming out I’ll get a GPU then - I figure they’ll be cheaper by then.

Make sense? If so, should I go with AMD or Intel for the CPU? Seems like AMD is the way to go these days but I’m not sure.

AMD APUs are behind the current 3000 generation of AMD CPU. Me, I’m worried the Trump China trade war will escalate and raise prices more.

I assume you are going with mini ITX and the next question is if you need below or above 20L volume.

Look into the Hades Canyon NUCs by Intel, though they’re a year out of generation.

You can’t stick a 2-slot GPU into the Alpha right? What CPU and RAM is it?

I wish the Loque Ghost and Dan A4s weren’t such a pain to get to Canada and more widely available: 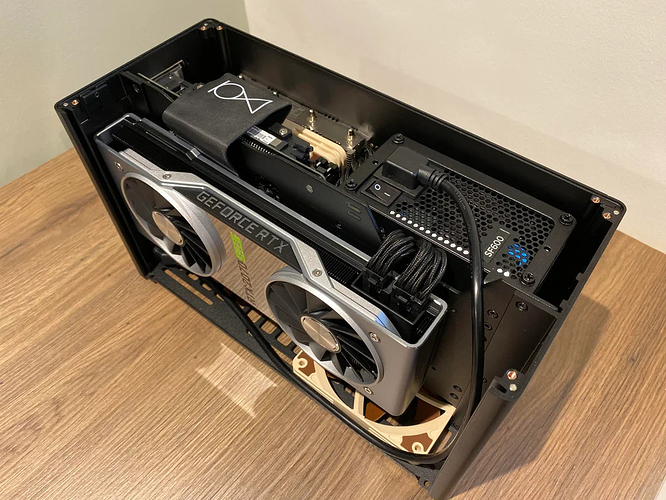 The Lian-Li TU150 has a handle

A few things after researching some more:

You can’t stick a card in it, but if you have an R2 model you can use a graphics amplifier with it.

But a SFF with an external graphics card might be up your alley.

Oh yeah I recommend more than 4 cores, 4 threads. i3 is just dual w/o boost frequency, right? The thing with SFF, putting in GPU is such as hassle I wouldn’t recommend doing it later…

Did you make any headway with this @LMN8R ?

I’ll get a GPU sometime in the next few months.

Huh I didn’t know there was a node 202 that could fit a gpu. Haven’t looked at any in the horizontal form factor in a long time and antec’s couldn’t fit a full gpu. Nice going.

The Node 202 only comes in one size. It does have some size limitations but nothing too severe. And people recommend getting a card with a blower instead of fans in top.