Can the Rabbids make effective teachers? 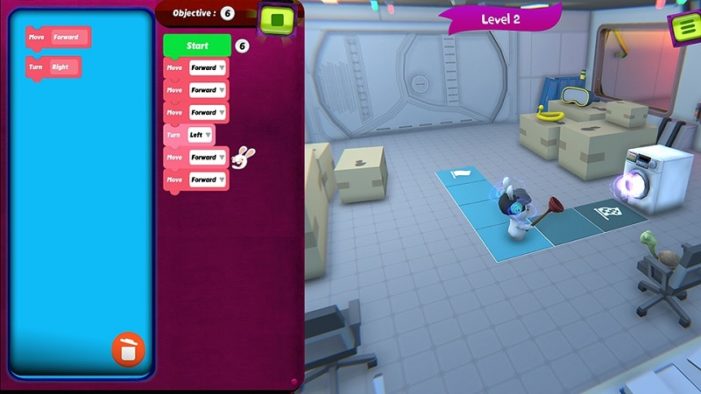 Ubisoft is releasing Rabbids Coding for free today. It's an educational title that teaches the basics of coding concepts via the antics of the Rabbids characters..

For some reason I read the title as “Can Rabbis make effective teachers?”

I dont know - isn’t this way to abstract? I introduced my daugther to Python the other day actually, because she is considering a career in programming, and wanted an idea of what it entailed.
I don’t really think playing this game (Based only on the video, that is) would give her that in any meaningful way?

This is similar to Scratch or programming in Human Resources Machine. It teaches you the kind of problem solving you have to do when developing and gets you used to conditionals, loops, simple algorithms, …

They are all good introductions to what programming is about, IMO. It’s not about syntax, it’s about getting the right problem solving mindset, especially for younger audiences.

Yay. Another generation of tech slaves killing themselves developing video games on the cheap.

Does the Rabbid game teach kids how to form unions so they can fight for better working conditions?

Cheers for that - I have no real work related experience with programming - Just learned in school and and never really got to use it in work.
I think I’ll point her towards it then.

I remember as a kid trying to figure out how to program games. I found a Logo tutorial that moved a turtle around the screen, not unlike moving a Rabbid. As I read along, I kept wondering how moving a turtle leads to programming the next Microman game. It turns out games are complicated!

Aye - thats kinda what I meants. Its extremely abstract!

I’ll have to play around with this over the weekend. I do really appreciate what CodeCombat tried to do as well, so I’m curious how this compares, or if it’s more like Human Resource Machine.

I mostly tell people that if they are able to play puzzle games, then they can learn to code.

I teach coding to kids (age 6-12) every other week and pretty much all the systems we have use block-based programming like Blockly and Scratch. Very many of these kind of tasks also use popular characters. Code.org has lesson plans with Angry Birds, PvZ and Minecraft, IIRC. Kano has a coding kit in which you program a Harry Potter wand. Lego Mindstorms have a Star Wars Droid Developer kit with R2-D2.

I’m a bit surprised that Rabbids have enough of a pop culture presence for it to make sense to build this kind of product, but otherwise this seems pretty standard for the field. High production values - though in my experience kids don’t really care about this all that much. I find it disappointing that they require a log-on to Uplay to download this. I’d happily introduce this in a class, but the requirement to download an always-on games client and sign in with a private account on a dozen+ school machines makes this a very hard pass.

@Hamilton
It’s not too abstract for kids - block programming is actually as close to a perfect way to teach coding to kids as exists. My youngest boy was able to solve even complicated code.org puzzles at age 5, way before he was capable of reading (he saw big brother working on it and of course insisted on trying himself) or writing more than handful of words.

For an older/teen kid, it may be too simple, but don’t be too sure. I usually have parents in my classes helping out with the kids, and I’ve seen more than one parent struggle with tasks that some 7-year old kids breeze through. As @Wendelius say - it’s not about writing code - it’s about teaching the problem-solving and logic-thinking approach that you require to do basic programming.

I’d recommend code.org - it’s one of our go-to places in the LearnKidsaCoding movement here in Norway; it’s just a totally awesome resource. For older kids, it also has this very neat feature where you can see how Blockly is translated into Javascript (the real language underpinning Blockly).

hi @strategy Thanks a lot for the recommendation. She is 20 years old, but enjoy games so maybe its not such a bad idea. I’ll be sure to look into code.org.

For age 15+, I’d probably suggest finding a good programming course/book, and going to town with that - the code.org stuff is probably a bit too simple for her (other than for the fun of trying it).