Cheap off-shoot Tablets. Any decent ones?

I’m looking to get the wife an inexpensive tablet ($150 or under) for Christmas. Is there a decent one?

All she does is facebook updates, zynga games, she likes that ninja fruit game, light web-browsing (wi-fi), and eBooks.

Should I just save up for a Kindle Fire? Blackberry playbook? $200 would be the hard ceiling limit.

I don’t know anything about tablets. I played with an Ipad once for like 30 minutes. I kinda like that ninja fruit game too.

Kindle Fire is definitely the best choice here. You can get a new one for just $159: 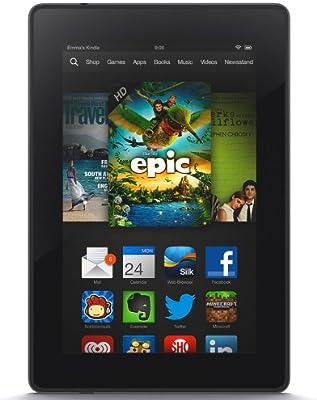 The new Kindle Fire HD is a full-featured HD tablet at an SD price. There's more to enjoy than ever before with a stunning HD display, faster performance, longer battery life, and lighter design Faste ...

That’s a slightly-upgraded version of the original device released a year ago. You can probably find them even cheaper refurbished or used if you look around.

It’s plenty fast enough to play simple games, the web browsing experience is actually pretty good, and is the best way to get access to their massive ecosystem, especially if anyone in your family already gets Amazon Prime.

I’m not sure you can beat the nexus 7 at $200, assuming that screen size is large enough for her needs.

For $200 and lower, Nexus 7 or nothing–unless you have lots of Amazon content to justify a Kindle Fire. Don’t get a Coby Kyros, Hip Street whatever or any other crap Android tablet. They’re exactly that, crap and proof you don’t love her.

PlayBooks are sub-$150 now but it’s another case of not loving her.

Yeah, the Nexus 7 is so much better than anything else under $400 that it’s not even worth considering alternatives unless you find something for like $40 and are desperate. Certainly at $150 the answer is to spend the extra $50 for the N7.

Nexus 7 or GTFO. They also made 16GB the default storage config at the same price ($199) which is great.

I cannot emphasize enough how crappy the software is on the Kindle Fires. You really want stock Android, unless you are OK with being 100% locked into the Amazon ecosystem forever on your device.

FWIW, while the Kindle Fire has a crappy UI for us sophisticated user types, every casual user I know of who has one really likes it. For what the OP describes, it fits the bill well.

Yup, the interface is simple, straightforward, easy to understand, and while it’s smaller, the Amazon app store is a lot more reliable and trustworthy than Google Play.

Kindle Fire is now $129 today, so it’s even more obviously the best choice.

The new Kindle Fire HD is a full-featured HD tablet at an SD price. There's more to enjoy than ever before with a stunning HD display, faster performance, longer battery life, and lighter design Faste ...

The original kindle fire was a heavily compromised product. It is the best choice by far at that price, but if you can afford $200, the nexus7 or fire HD is a much better choice.

It’s heavily compromised if you’re an enthusiast who actually wants to do a whole lot more. My original Kindle Fire was plenty enjoyable to use for web browsing, playing games, watching video, reading books, and more.

You talking about a 54% price increase between the two. Of course there are better choices, but $70 is a lot to some people.

In this case, the OP can get everything asked for:

All she does is facebook updates, zynga games, she likes that ninja fruit game, light web-browsing (wi-fi), and eBooks.
in the price range asked for, on a well-built device, from a company with an incredible track record (and top-tier customer service), that gives you access to one of the largest content ecosystems in the world.

Not so much. It’s thick, bulky, and (most importantly) doesn’t have volume buttons. It’s a compromised product. But at that price it’s unbeatable.