The second game was the first that had to fit into consoles right? It had to be more constrained. Allowing for that I enjoyed it.

I think Crysis 2 in itself is a fine game, but if you came there as someone who enjoyed the gameplay of Far Cry and Crysis 1, the far more linear level design and the mini-sandbox approach certainly were a bit of a turn-off. I myself was somewhat bored by the setting because NYC had been done by so many games in that era, e.g. GTA 4, Prototype 1&2, the Spider-Man games and so on, so I found it to be a step back from the tropical island thing Crysis 1 had going for it.

I kinda prefer 3 over 2 because the former goes back to haven more open level approach from 1 while merging it with the elements that had worked in 2. And while it’s still set in NYC, it’s set further in the future and thus is more interesting.

strange, not sure if the new name Cyisis will fly on the Switch. Maybe intentional, who knows.

When are they going to remaster Far Cry 2?

When are they going to remaster Far Cry 2?

Well, thats not a Crytek game so I doubt they will remaster it. However if your “they” is meant as a more general “game developers”, then yeah I’d also love to see a FC2 remaster.

They, as in Ubisoft, already remastered Far Cry 3 so at least there’s a precedent for remastering a game in the series.

Seems statistically more likely you’ll get another Ubigame that happens to be set in Africa. Maybe Far Cry 6.

Now I can’t unsee it. Damn it @Telefrog.

The plot thickens. The remasters (yes, plural) will be “co-created” by Saber Interactive. Tim Willits went there when he left ID last year.
Willits twittered about the remasters concentrating on the single players campaigns. This could indicate the stand-alone add-on Warhead could be included.

I really hope Warhead is included, it was probably my favorite after the original classic.

Warhead was my favorite, period.

I have quite a few posts about Crysis in the Crysis thread, but none in the Crysis Warhead thread, so I went looking, and I found this post about it in a game of the month thread:

I also played through Crysis, and halfway through Crysis: Warhead. It took me a while to warm up to Crysis, but I ended up loving it. Especially the second half of the game, once you were fighting aliens. So far, I’m loving Warhead even more right from the beginning. They improved the controls with the keyboard and mouse, and they have a much better controller scheme, and the game’s level design is better this time around too, since they tend to take you straight from action piece to action piece.

It’s funny hearing myself talk about the keyboard and mouse controls. I think the last first person shooter I played with keyboard and mouse was actually Crysis Warhead, given that this post is from September 2010, and Bioshock 2 came out earlier in 2010, and that was the last major release that I played from beginning to end with mouse and keyboard I think.

The only one I can think of after that where I kept switching back and forth between M/K and gamepad was Borderlands, where I would switch to M/K only when I was using the sniper rifle.

Almost time to resurrect your favorite “But can it run Cyrsis?” memes. 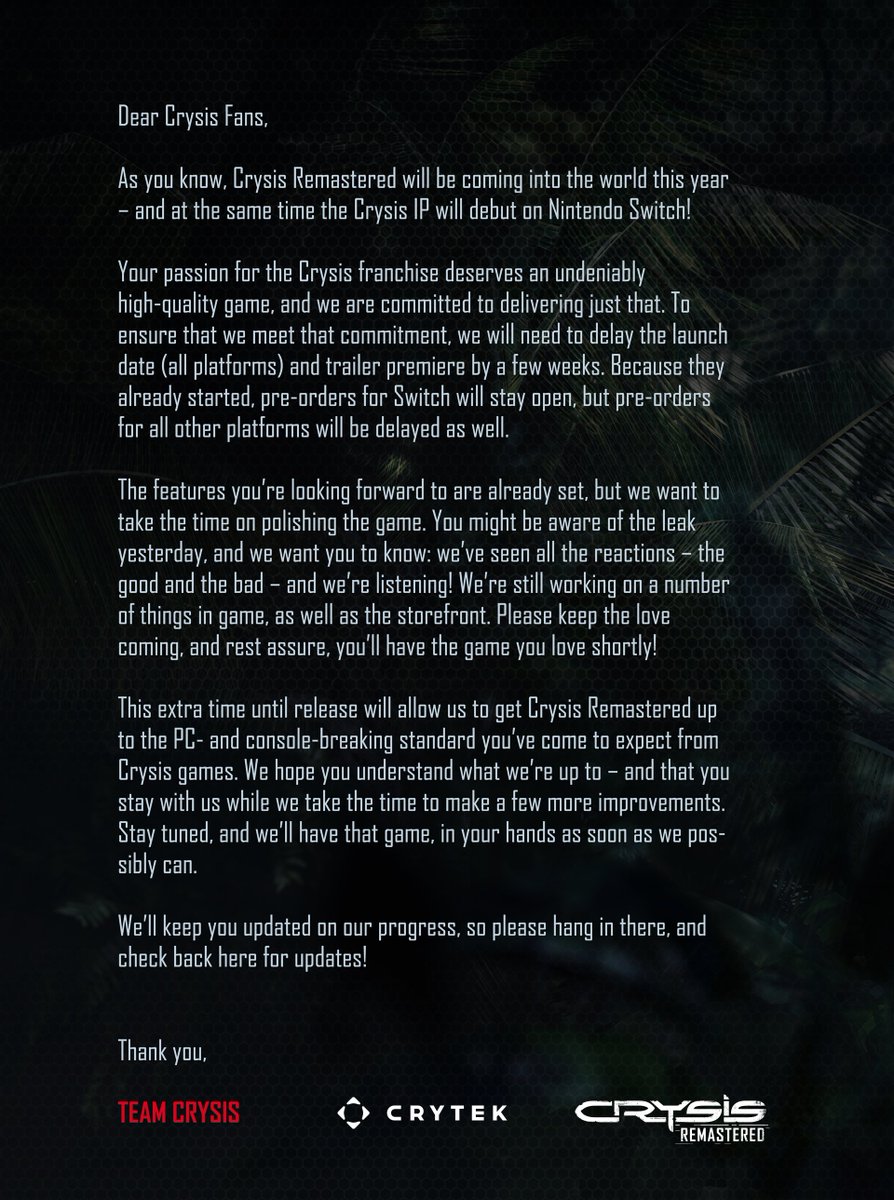 Fans are upset with Crysis Remastered’s graphics, so Crytek is delaying the game

A crisis for Crysis