Somehow missed this movie until a few days ago. Terrific, lean, weirdly funny and sad British revenge picture from last year. Great lead performance by Paddy Considine. Doesn’t look like it ever came out here anywhere except a few film festivuses and, thank god, mininova. Not that I’m saying you should download it. Not that I’d have any influence on you. Not that you won’t do whatever you want anyway no matter how I feel about it. And it has an amazing Smog / Will Oldham heavy soundtrack.

I was moved to go see this movie from Erik’s terrific marketing in the History of Violence thread. (One should not infer that “go see” involved use of any kind of software whose name can be a synonym for “downpour”. Such an inference would be unfair and not very charitable.) It was a good thread to bring it up in; in a saner world, it would have received the kind of (un)critical attention that that received.

Anyway: goddamn, what a good film. I’d seriously call it one of the best I’ve seen this year.

Finally! Somebody else sees it. It’s like if Mike Leigh had made Rambo only instead of eating things that’d make a billy goat puke, Rambo calls a lot of people a cunt. Anyway, great credit sequence and opening lines:

One of my favorite bits was the hapless gang of villains frantically running away after they find out their ringleader isn’t really a crack shot. 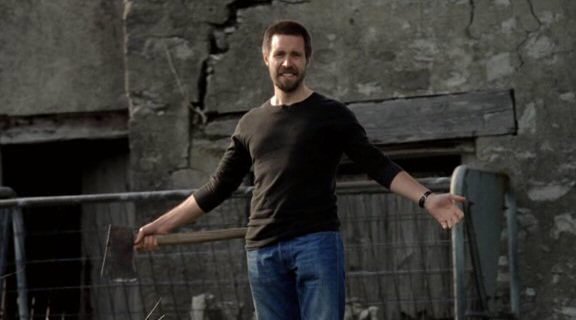 I really enjoyed the reason that our avenging hero was so unstoppable wasn’t that he’d been turned into a Super Army Soldier! but simply because his targets were weak cowardly excuses for human beings, and he was crazy enough to not give a fuck and to have no fear of them whatsoever.

I also enjoyed the important moral lesson in the film that sometimes you should trust your gut instinct that the tea tastes a little funny.

There doesn’t appear to be. It came out sometime in 2004, so I guess there probably won’t be at this point. Amazon UK has the region europe dvd (with a bunch of cool sounding extras) for a little less than 20 americos shipped. I gotta figure out if I can play one of these, then I’m gonna order it.

Except they replaced some of the quirky British driving around atmosphere with quirky British stabbing atmosphere. Net plus.
Brits are apparently big on their revenge movie protagonists avenging wrongs done to their younger brothers.

Sorry for the necro, but holy shit, this a great film! I had trouble understanding some of the heavy accents, but even so, I had no trouble knowing what was happening at any time. Brilliantly executed! Not real heavy on the action, but I loved it that way. If you haven’t yet seen it, it’s available as a rental ($2.99) on Amazon Instant Video (free if you have Prime).

Wow, we have a Dead Man’s Shoes thread! I almost glossed over this thinking it was for Dead Man Down.

Any Dead Man’s Shoes fans should make sure to see This Is England, from the same director, Shane Meadows. And if you want to count yourself a Paddy Consadine fan, you also have to see Pu-239, which is not about a submarine.

Thanks for the recommendations. I now have on order the DVD version of “Pu-239”, which was amazingly inexpensive, as was “Dead Man’s Shoes”.
Dead Man’s Shoes is a real keeper, so I’m extremely happy to add that to my collection. Seriously, it’s the best film I’ve seen in a very long time. I’ve seen it twice now already, the second time with my girlfriend. It made her cry, a lot, which surprised me. She loved it, which I consider a great achievement, as she is usually the one who picks the movies around here, and normally doesn’t enjoy the movies I stumble across.
Pu-239 looks very interesting as well. Really looking forward to seeing it.
I haven’t yet checked into This Is England, as I haven’t had much time to do any research, but if it costs as little as the other two, I’ll likely pick it up.

There is now. About $9. Amazon says the US version was released in September 2006. They had two in stock, but I took one of them. They say “more on the way” though.