Discord is jumping into the video game

We’re testing Video Chat and Screen Share with 5% of players, today (updated to...

Starting today, we will be testing out Video Chat and Screen Sharing with 5% of desktop players (registered before today). This will roll out through the day.

We’re still at least a month out from considering a full launch. Why? We’re measuring and testing bandwidth; acquiring and implementing more backend servers; and praying our code actually works. This takes time. It could also be longer than a month. 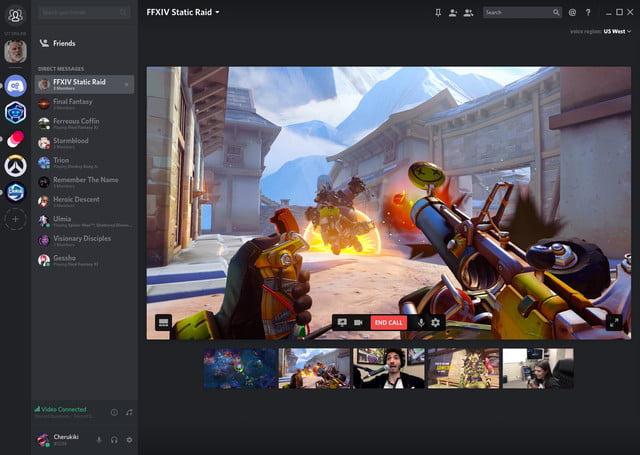 Next up: Microsoft acquisition, followed by ridicule and ruin.

OK, I’m getting this confused with Discourse and Disqus. What’s a Discord again?

popular voice chat for during multiplayer coop games.
You could always use Steam overlay which provide same functionalities, so I am not sure why Discord is so popular.

Ah, well that explains why I’ve never heard of it then. Why would MS buy it if they already have Skype?

Because one should never miss an opportunity to buy something so you can bloat it up with “features” till it ceases to work well.

It’s also a text-based chat with user-creatable servers, privacy controls, infinite searchable history, multiple room/channel support, tons of support for mod powers and even bot support. You can be logged in via browser, PC/Mac program, or cellphone app, with configurable notification support on a per-channel level in each. Supports image sharing, one-boxing of stuff like Youtube videos, integrated Steam and streamer support. . . Discord is awesome.

Discord is really good, I’d even go so far as to call it IRC 2.

I almost got to cosplay as Hagrid at the bookstore I was working at for the HP 6 book launch. . . but then my flight home from college orientation got delayed by a massive storm and I just had to sit in a hotel room and read the book by myself while everyone else partied and chatted excitedly and had delicious HP themed food and drinks.

Discord is great. Use it to play pen and paper online sometimes. Usually use Google Hangouts to play with Video. Having Discord as an alternative with the many changes Google has done to Hangouts already will be good.

Discord is the one that’s awesome.

Next up: Microsoft acquisition, followed by ridicule and ruin.

I wish I could laugh at that joke, but it’s too plausible for comfort, alas.

OMG OMG THIS IS SO EXCITING I JUST POOPED MYSELF etc etc.

Discord sucks and this makes it suck more. I hate that everyone is moving to it.

Okay, so Twitch, a streaming service, is launching an app that incorporates friends and voice chat. And Discord, a friends-and-voice-chat app, is expanding to allow streaming. Right? I feel like I’m taking crazy pills.

What? No it doesn’t. What makes you say so?

Why do you hate it? I don’t use Discord often but when I do it seems to do its job very well.

Sorry if that phrasing sounded unintentionally like a Dos Equis commercial.

This is great. I regularly play co-op Hearthstone (Arena matches) with a friend and being able to share screens in discord will make us drop Skype forever.