It’s been years since I last played this. I bought the 2007 version, and even forced my friends to do the same. But our game fell apart quickly.

I too, would be interested if something would start here. I’ve played the boardgame several times, and still consider it one of the best boardgames I’ve played. I have many memorable moments from EiA sessions.

EiA is the kind of game where it takes a very dedicated group to survive past the first 2-3 years in game-time. I’ve played a number of games face to face, and a single PBeM, and they all invariable fall apart after that amount of time.

First, because it is a slow game that takes a lot of time (132 multi-phase turns, as I recall). Secondly, because it is not really a very good competitive game. It is incredibly entertaining as a game experience (i.e., generates good stories), but the likelihood of keeping seven players all equally interested in a year-long game where it soon becomes apparent that only two or three have a realistic chance of winning is minimal. EiA for PC is a very niche title. Strangely, I haven’t noticed the PBeM scene (which exists) really picking this up, which has always left me a little bit dubious about the product.

Whoa, that’s an actual thing? How is it that I didn’t know about that? An adaptation of a grand strategy boardgame from back in 2007? Surely it’s awful and it just falls apart completely after a few turns, right?

Correct. It’s not very good. It isn’t even a proper port of the board game as it incorporates a ton of quite controversial fan made changes. The guy who did all the work (and kudos to him for making it this far!) creating it had never played the board game before starting on the project.

As a longstanding EiA fans, my now far-flung group took several stabs at pbem, never making it past 6 turns before serious problems set in. The pbem system itself is very clunky and not well streamlined (though pbem EiA is hard to streamline in general).

It would be easier to simply play via vassal using some of the pbem rules already out there quite frankly. Then at least you have control over optional rules and can actually play the original game rule set.

Edit: as terrible as it is if someone here wanted to get a game going, I would play. When I have some time later I’ll link to the classic counter set I made for the PC version, and my vassal mod also. I am a crazy EiA fanboy ;)

I then went about making a VASSAL mod (as I was disappointed with the quality of the existing ones). It is mostly complete and I think in a playable state:

Edit: here’s a link to the map I made for the VASSAL mod, as close a replica of the original game map as I could manage: 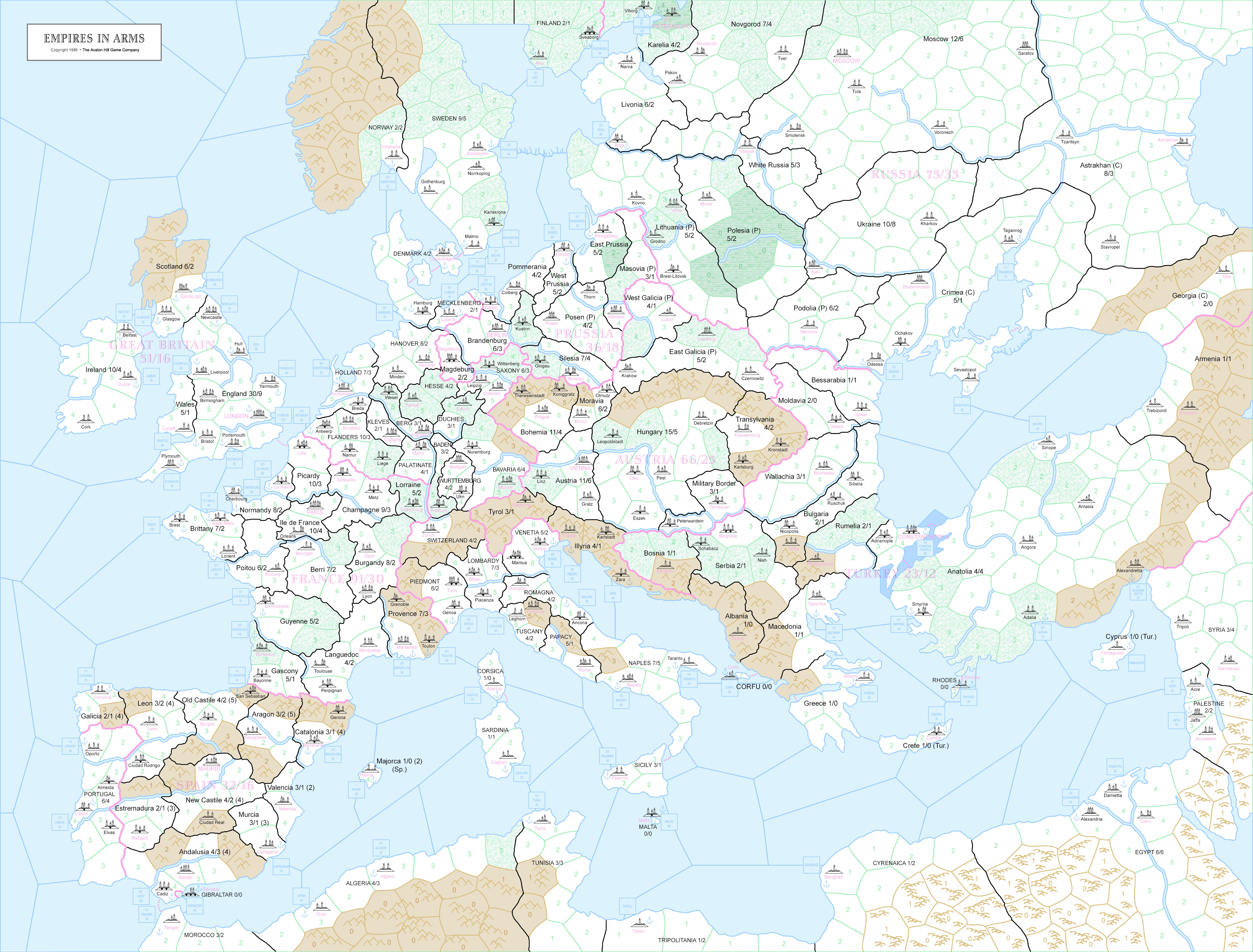 EiA is a game that has inspired my game design quite a lot. I bought the original boardgame in the mid 90’s, and the boardgame which upon EU was created pays heavy homage to Empires in Arms.

March of the Eagles was one of the things floating around in my head while I was thinking of this. Since I am a big fan of CDGs (Card Driven Games) a good port of Napoleonic Wars would be pretty awsome too. On that tangent I would thing more CDGs should make the jump to PC if Hex and Counter can do it so can they.

After consideration for the amount of time I would be willing to devote to playing, one to two hours a week, Vassal is probably the best option to move through turn order efficiently. The PBEM over many turn segments probably means never finishing. With some coordinated live play on Vassal there may be a prayer of moving through a game in a way that can at least be seen as having an end. With 132 turns if one or two were done a week it is at least approachable, most likely the game will be called long before that end a couple years down the line. The alternative of increasing the length by just doing a segment of a turn makes the game stretch out beyond the madness of playing a monster in the first place.

That being said Vassal doesn’t frighten me and it is alot cheaper (free) compared to the matrix version. I would be up for giving it a shot. If we are considering Vassal I just ordered GMTs Napoleonic Wars and that game can apparently be wrapped up in 2-3 face to face hours. Anyone have experince with that one?

2-3 hours for the TNW is veery optimistic; it is not a game I’d sit down to with less than 5 hours on the clock, and I still wouldn’t expect to finish. True, the game can conceivably end on Turn 2, but that is not the norm.

The only Napoleonic strategy game dealing with the entire war that I know of that reliably comes in on 3 hours is “Age of Napoleon” - and its a 2-player.

March of the Eagles was one of the things floating around in my head while I was thinking of this.

Yeah, part of the inspiration for MotE comes from wanting to make an awesome napoleonic game for the computer, like EiA was for boardgames.

2-3 hours for the TNW is veery optimistic; it is not a game I’d sit down to with less than 5 hours on the clock, and I still wouldn’t expect to finish. True, the game can conceivably end on Turn 2, but that is not the norm.

The only Napoleonic strategy game dealing with the entire war that I know of that reliably comes in on 3 hours is “Age of Napoleon” - and its a 2-player.

As a comparison, we played an 9 player lan of Eagles at the office this morning, with it taking about 3 hours to go from 1805 to 1813.

As a comparison, we played an 9 player lan of Eagles at the office this morning, with it taking about 3 hours to go from 1805 to 1813.

I’ve been looking for the author and would like to know if you made it with a vector-drawn based program. I’d like to re-covert it to .gif at a higher resolution and also modify it for fan made scenarios set in alternate periods.

I can’t figure out if this forum has no DM options or if they just don’t work for me. Pls contact me with your contact information if you can.

PS: There’s a small mistake on the map: The river between Freiburg and Zurich should extend a little more to the east. ;-)

Hey, welcome. I can’t speak for this seven year old thread, but you may be interested in the map @Juan_Raigada made for our aborted game of EiA that petered out…over a year ago, now. Wow. Time flies.

I made it with photoshop. Unfortunately I lost the original files awhile ago (I had an enormous psd with all the elements on different layers) and all I have now is the flattened image.

Someday I’ll take another crack at it

Also, It’s now being used in a module for Table Top Simulator (not by me). Only tested it, but seems like it works fine. Still looking for a few players, or maybe you can start your own game: https://discord.gg/6htxMY

Where would I find this module?

In the Steam workshop.

TTS is €20, I think. It’s not perfect, but probably easier to get into for non-gamers than VASSAL.

thanks I’ll cast an eye on it !

So…
Knowing I couldn’t leech off Soapyfrogs’ work to get a more zoomable version, I set out to re-draw the entire thing. I used Inkscape since it’s free and has a lot of functionality. It took a while, but eventually I successfully traced and recreated everything on the map.
By hand. I tried some of the automated functions, but I didn’t find the results particularly appealing. It doesn’t have any mountains, hills, dunes or bogs, but I asked and some of the people using it didn’t want them. Should be only a few hours to add them though.

Hello fellow gamers, anybody knows if there’s a community still in this fascinating game? I’d love to start a pbem game, maybe even a small scenario, which would have a rather higher chance to get to completion than a Grand Campaign…