Great game, I really should pull it out again.

That’s so cool! Please tell us how it goes.

The Germanic tribes, figuring out that the weather is much nicer in Italy, decide to ditch the whole pillage and conquest thing and just holiday down there for the rest of the century. They miss the beer, but the food, wine, and women make up for it!

I wanted to like this game but the tutorial available with the game was so inadequate I never got past the stage of “Why am I losing this battle again?”.

I’ve tried looking for guides, etc. but didn’t find anything that helped me get a core understanding of how to play. I still own the game but it’s sitting there in my Steam library, unplayed.

These are the two tips threads that helped me the most. 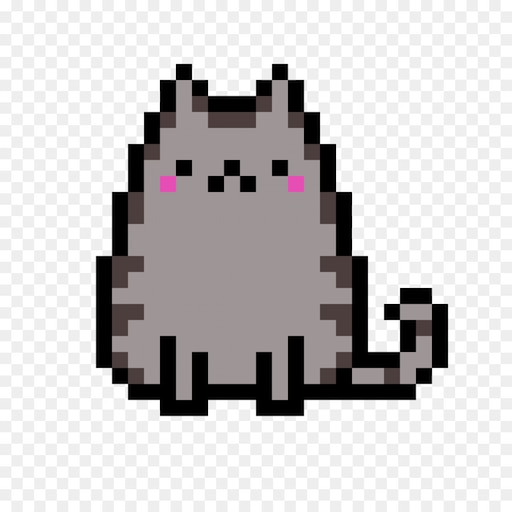 Pocus asked some of us to create a guide for FOG Empires...

I am sure people here are also happy to help. When I started, I scrolled back and read the start of this thread.

“Why am I losing this battle again?”

In summary, battles are about frontage and generals. Get infantry to fit the width of the fight, and skirmishers to back them up. Add horses for the flanks, optionally. So if it is a 6 wide fight (eg a forest) then 6 infantry + 6 skirmishers + 2 cavalry is ideal.

In that formation, with a competent general (+1 attack) you should win most fights.

I also found it very helpful to pause the auto fights and step through the results one at a time, to see the modifiers. For example, skirmishers in the back rank give a +2 supported bonus, which in a d10 system is a big help. Attacking an opponent on a hill gives the opponent a +2 bonus. Etc.

Thanks for the info. That does help. Is the included early Rome scenario a good way to learn the game or is there a better choice of scenario and starting civ to learn the ropes?

No, Rome is a terrible way to learn - too complex, and enemies pounce quickly. Pick someone small and sheltered. I like the Hibs or the Picts up in the British islands.

In the standard Grand Campaign 310 BCE.

Ah, so the tutorial scenario WAS crap. It certainly seemed that way. I will probably try one of the British Isles starts; a faction in a map corner is usually a good way to learn.

In summary, battles are about frontage and generals. Get infantry to fit the width of the fight, and skirmishers to back them up. Add horses for the flanks, optionally. So if it is a 6 wide fight (eg a forest) then 6 infantry + 6 skirmishers + 2 cavalry is ideal.

No joke! I’ve played Carthage on a higher difficulty and my generals were crap. Not sure if this is because of who I’ve played as or it’s just random luck. The armies are more or less similar so +1 or +2 enemy general is decisive.

I’d also recommend the Dacians as a learning experience. Nor likely to be targeted by major powers anytime soon, but close enough to have some trade possibilities. Also, great defense.

Some of the allies are doing well. Belgae (blue-grey) defeated the Parisii and absorbed them. Gothones (light green) staved off civil war and is expanding again slowly, but are mindful of the decay that is taking root in the leadership (“old” plus 4 more decay tokens).

Rhaeti (dark green) is struggling with low manpower, the scare food in the mountains makes them jealous of their low-land cousins. They joined Cheruscii (brown) in a defensive war against the Marcomani (pink). The allies took land easily, and prepared to invade the enemy’s capital.

Alas, the legendary general Finn of the Marcomani was victorious in both battles. His 2-star rating in defense was enough to repel the equal sized invasion from the Cheruscii (and their 2-star rating on offense), and combined with the defensive terrain bonus meant some of the attacker’s troops died while the defender survived intact. This was a ill tiding for the second wave of attack from Rhaeti, and their anemic force was decimated.

Both Cheruscii and Rhaeti are pulling back to lick their wounds, a meager peace agreed with the Marcomani … for now. 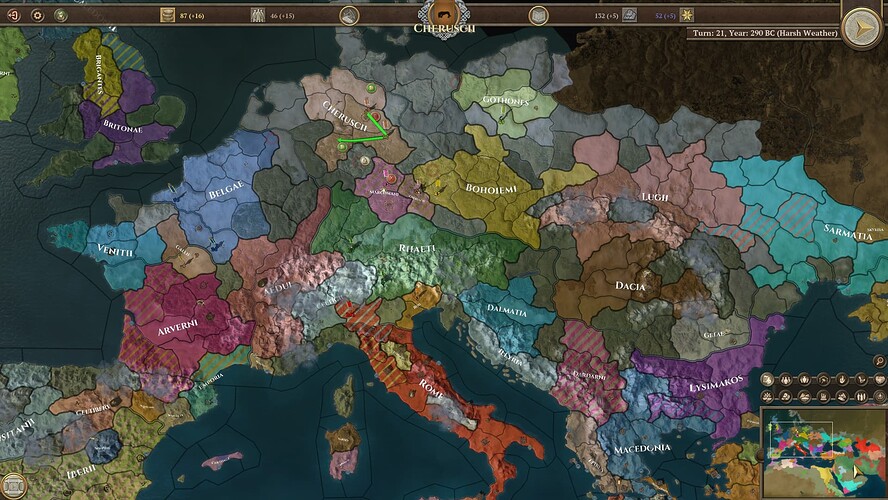 Decay and decadence are setting in. Gothones slipped into a Decadent tribe, and radically changed their approach. They have disbanded much of the land military, shifted workers into commerce and culture, and are using pirates to raid their neighbors.

Belgae continues their military expansion, taking on Venitii. While initially successful, their troops are whittled down and in a standoff outside of the enemy capital. And decadence is taking hold.

Bohoieme declared war on Rhaeti, taking advantage of the mountain faction’s small military. The allies sprung into action, with Rhaeti and Cheruscii each taking lightly defended regions. However, the addition of new, unhappy lands is causing Rhaeti’s decadence to mount, and their ruler is considering internal changes.

Cheruscii initially took lands from Boho, but has changed course. They asked for peace, even offering to give back a Bohemian region taken long ago. Cheruscii is conscious of the decay settling in to his allies, and wants to focus inwardly and see if their faction can climb to glory. 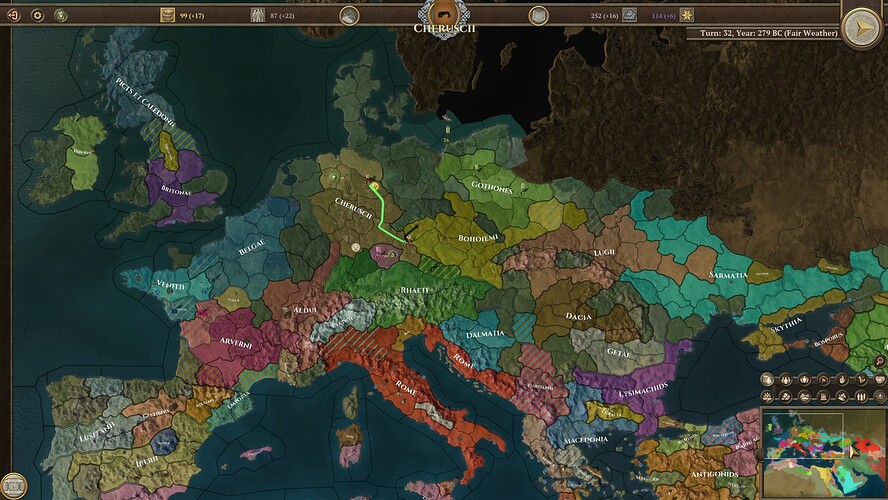 Civil War has broken out across half of the allies. Gothones government collapsed and rebels took over many regions. This triggered neighboring Bohoiemi to declare war and compound their problems. Gothones had to retreat back to their capital, and they are slowly starting to re-take the province.

Cheruscii government collapsed. A leader, that was loved by the rulers but apparently despised by the people, was “killed and his head placed on a pole by rioting soldiers”. A new leader, who is weak in military and mistrusted, has taken over - triggering half of the regions to rebel. Chruscii had a large army in place, a necessity after many battles with Marcomani, and is slowly re-taking regions from the rebels.

Belgae’s military advance has been halted in the west. They were unable to conquer the Venitii, and have pulled back to their core province and started investing in their government and culture.

Rhaetii has held strong! They shifted some regions and now control two full provinces. They continue to invest in their farmers and their food production, and they are slowly growing. They have also balanced their culture and are starting to slowly advance their society and their government.

That was the roughest 10 years for the alliance. The map shows the political view of the Germanic hordes. 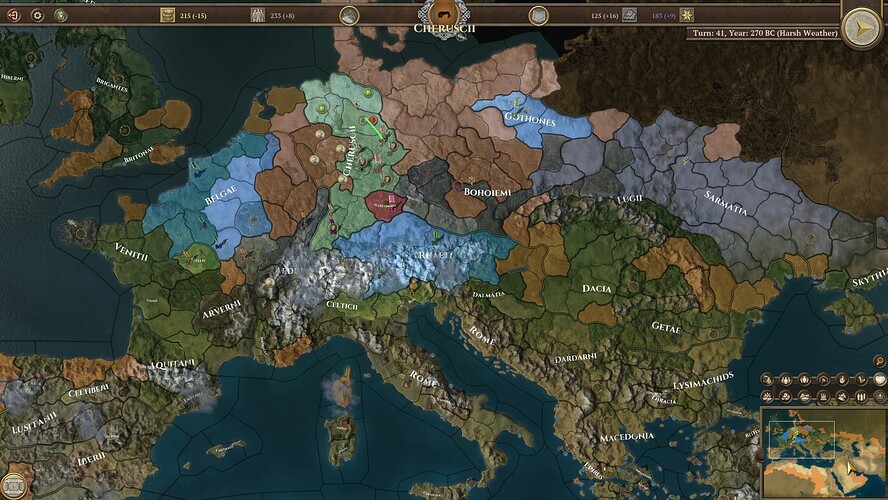 This may finally tip me over into buying this one during the sale and trying to figure it out.

This looks like a challenging game to learn, perhaps too much so for me. I watched a ‘splainer by TortugaPower and the more he explained the more I was getting lost. As much as I want to support Phillipe I will pass on this one 😞

I find it less difficult than any Paradox game. Its transparent (see Tom’s review for his thoughts). I can figure out why things are happening easily. Yes, it took me 5+ hours to get a feel for it. By 20 hours I was confident. (I am still learning to optimize things by 40 hours playtime.)

The alliance has crumbled. The tribes are weak and will never compete with Rome. However, we will rise again! Here is the status, learnings, then next steps.

Gothones was plagued by poor lands and poor health. In the last decade they have been ravaged by plague and pestilence. The leaders, desperately afraid of cultural decay, were not growing the food supply. They managed to survive a few internal and external threats, and re-formed and held onto their four core regions, but their military was too weak to expand.

Rhaeti suffered from violent neighbors and a weak military, hampered by the poor conditions in their mountain regions. In the final few years, they had a revolt and then were invaded by three different opponents, losing their capital. The primary issue was not enough commerce to support sufficient troops to defend their two provinces. They had a glory period of about two decades, but within a few more years will be vanquished.

Cheruscii had rebuilt from three internal revolts, which whittled their lands from from 15 regions to 3. They slowly re-conquered their old lands, and are just now able to provide positive commerce and culture from regional buildings. They are successful growing their population and industry, and have maintained a large military force. However, Marcomani, holding the richest region in the Germanic lands, was never conquered, and they spilled out and attacked Rhaeti from the north. Cheruscii can maintain their own lands, but do not have the will to fight their neighbor’s battles.

Belgea prospered! Their rich and fertile lands sustained a growing population and a large military. They conquered a few neighbors and took their regions. However, their aggression has put them into a state of constant war with their opponents, slowly trading regions back and forth, and its having long-term consequences on their culture and the stability of their government.

In the end, all factions decayed to Decadent. This was due to the inexperience of the four human players more than anything else. We misunderstood the rules and thought decaying below Decadent would kill the faction. It does not! The faction merely decays down to Stable, which is actually an improvement (with fewer penalties). The impact is that 20+ turns were spent desperately putting all workers on culture, and not growing or building infrastructure, while the opposing factions grew stronger. We now understand how it works - its OK to decay below Decadent.

Here is the final map. Note how small Gothones continues to be, and that half of Rheati’s old lands are occupied. 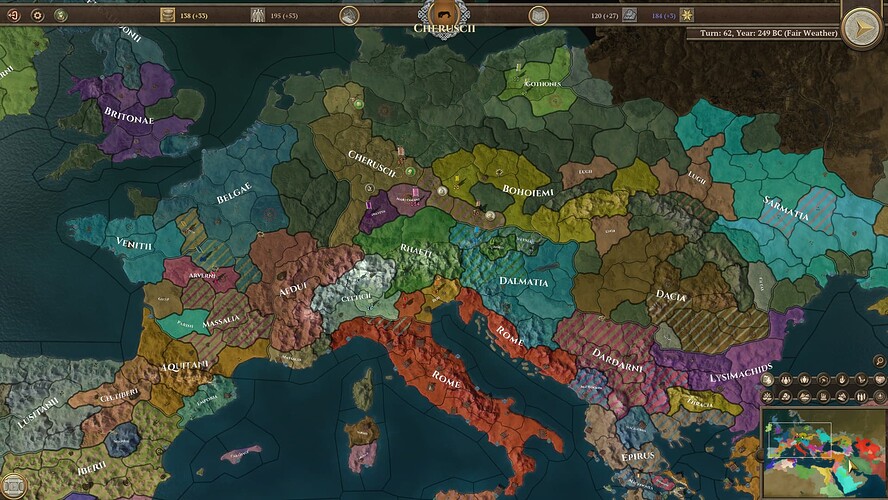 Population is a good measure of progress. A small population produces less of everything. Here is the allies progress over time: 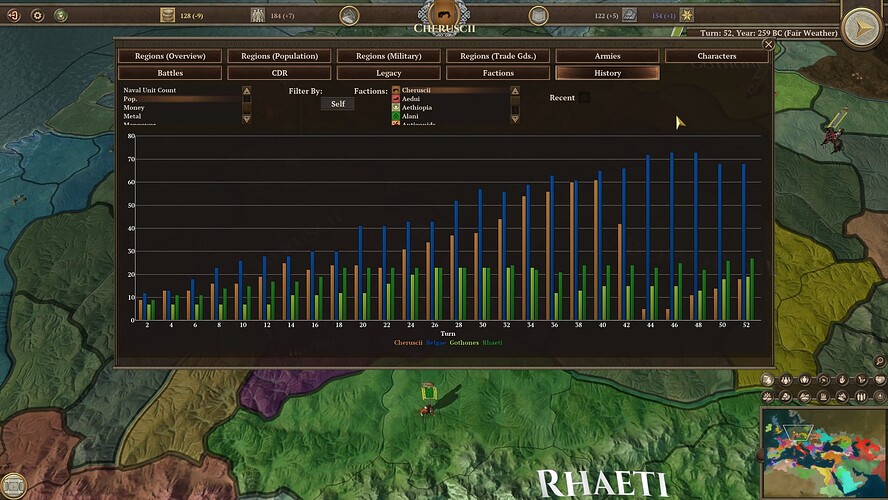 Adding Rome to see the difference: 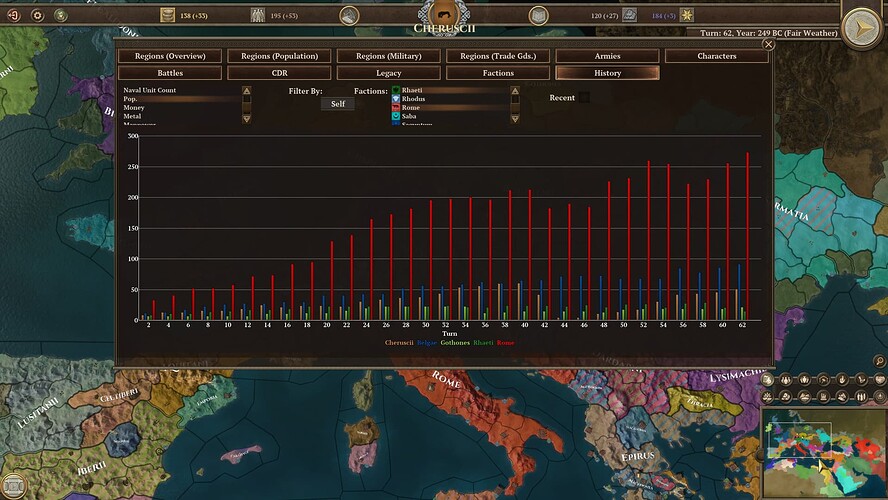 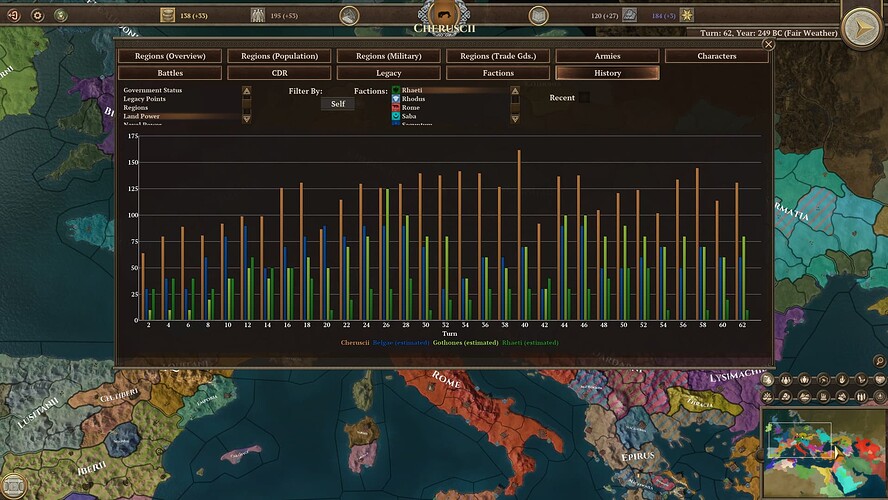 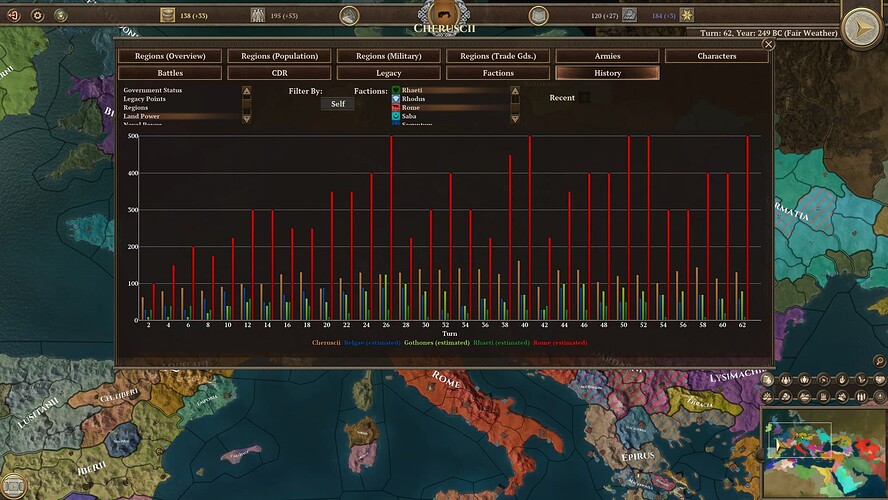 We restarted a new game! Same 4 players co-op versus Rome. We swapped around a few factions, for example someone will play Bohoieme instead of Gothones. I will continue the second version of this story after we play the opening turns.

This fits with my memory of trying to play those tribes. Very challenging! I found them far more so than Dacia and the nation south of Egypt – I forget the name.

Looking forward to hearing how things go next time around.

Playing the smaller tribes can be tough, as the best strategy to start is probably to hunker down for 20 to 40 turns and grow your population and stabilise your government. Don’t even expand, and certainly don’t expand into neighbouring territories that only have one pop initially - wait till they get bigger before annexing as low-pop territories are a huge drag on your economy.

Of course that waiting puts you way behind the curve as regards the more developed nations, so you have to set your own goals or victory conditions, usually.

Egypt is a lot of fun to play as a beginner - only one real threat (the Antigonids) in the early game, lots of developed regions so you can get to the good stuff sooner, and you can boss the Mediterranean with your fleet.