Found out why Blizzard has such problems with servers

Our server is down “AGAIN”, and I found this while waiting/looking for game info. Things are so bad on our server, this actually seems plausible :cry:

In those 4 months, according to their subscription numbers, they must have moved heaven and earth 10 times over.

Let’s work with a metaphor, shall we? You’re on the beach, and the tide keeps rising. The beach is designed to keep you dry, but near the exciting water. As the tide rises, you complain to the lifeguard (who’s already aware of the situation) that the tide is rising. You may not have noticed, but he’s been busy with 20 of his friends sandbagging the end of the beach so that the water doesn’t hit you.

The tide starts to rise faster…ridiculously so. The lifeguard calls another 50 friends, and they all start building up the biggest sandbagging project you’ve ever seen. It’s no use, some of the water still gets through.

And what do you do? You complain about being wet.

On the other hand, I could care less how fast they’re putting the sandbags up if I’m the one drowning because they’re too busy to pull me out.

I’m fine with believing Blizzard is doing the best they can. However, empirically, that’s simply not good enough. Your argument basically says I should be content as long as they’re making the effort.

You go skydiving, you pull the cord, nothing happens.

Nah, all you care about is that the ground is approaching at 200mph and your parachute is broken.

Fixes, not excuses. Thats all that matters.

Did Blizzard outsource all their operations to EDS or something ? ;)

I dont believe its that big a technical issue, a friend works for a company that deals with more traffic in an hour than I expect Blizzard gets in a week.

p.s. the parachute metaphor is someone elses, and the original was alot better done than mine. Its a good one though.

We’re comparing a two-hour server outage with getting killed? No hyperbole going on here, no sir :roll:

You know, i don’t remember Google charging us all $15 per month to use it either.

Hehe, while being able to log into a videogame isn’t even remotely comparable to plummeting to your death, that’s a somewhat accurate analogy. Blizzard’s role as a service provider is to please their customers enough to retain them, and our roles as customers are to withhold our money when they fail to do so. At some point “trying hard” just isn’t good enough, and we need to start seeing results. I wouldn’t keep going back to the same steakhouse if my cut was charred to a crisp every single time I ordered it, how is this different? I don’t care if they are training a new cook or not, let him practice on somebody else’s steak!

Bottom line, if you’re not satisfied with the service, stop paying for it. As for me, I’m still having fun.

And I don’t remember any ads for Canadian subscription meds popping up when I search the Auction House for plate armor. What’s your point?

Sebmolo’s first point - that the linked-to post Just Isn’t Funny - is correct though, regardless of the rest of the debate.

I mean, yes, it’s aiming for chuckle-worthy at most, but it doesn’t even raise a smirk. And there’s something uniquely soul-destroying about failed attempts at comedy.

Even this picture of hamster-powered EQ servers is funnier. Which says something.

We’re comparing a two-hour server outage with getting killed? No hyperbole going on here, no sir :roll:

The er… metaphoree isnt killed, he still suspended in that theoretical moment at 200mph above a hypothetical ground wondering about his parachute company…

The funny thing is, when i was a EQ guildleader I actually had a guildmember compare a wipeout on a raid we had to crashing his car and getting injured, that was just before he started sending death threats to others in the guild about other in game incidents, so never undestimate the “passion” (insanity/addiction/etc) of mmog players.

At some point “trying hard” just isn’t good enough, and we need to start seeing results.

My contention is that we’ve been seeing results all along. The results are that the majority of us are playing, having a good time, and aren’t currently drowning or plummeting or spinning wild metaphors. The fact that the game servers are even still chugging along after the holiday season onslaught that Blizzard experienced is testament to that.

Oh, I agree. My experience with WoW has been good enough that I want to keep playing, and I probably will for a couple more months. I’ve had good luck with my server being up, have never been put into a queue and only very rarely have I noticed lag. I’m one of the lucky ones, others apparently have not been so lucky. I just reject the notion that we should be commending Blizzard for overcoming the hardships of delivering what their customers expect from them. Fixing bugs and keeping their servers up and running isn’t virtuous, its not even par for the course.

The idea that the “holiday onslaught” is an unfortunate event inflicted upon poor, poor Blizzard is seriously backwards thinking.

If you can’t get in, stuck in queues, server’s always laggy or crashy, then sure, be upset, I would be too. Feel free to voice your concerns even, and if you feel strong enough, cancel your subscription. No one’s argument is that you should be content with poor service. I think what most people are getting defensive about is the attitude that Blizzard is stupid/not dealing with the problem/hates you personally.

For example, when people say that Blizzard isn’t trying hard enough, or that trying hard isn’t good enough, they want results, what do you propose Blizzard do? Give you refunds? It’s a possibility, so talk to them about it I guess, but if that’s not happening, consider that no, maybe Blizzard trying hard enough won’t be good enough to keep your business, and if there’s nothing they can do about it, there’s certainly nothing you can do about it by complaining. Don’t think you’re doing Blizzard any favors by “explaining” to them that since there is a problem, they should fix it.

It’s not a 2 hour outage… It will have been 2-3 days when they get done. When I posted this thread they had already been down for 6 hours. 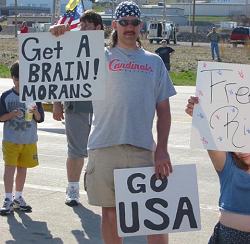 It’s not a 2 hour outage moron. It will have been 3 days when they get done.

Is that to me? I didn’t mention any time frames. Tell me what you want Blizzard to do differently.

[quote=jpinard]It’s not a 2 hour outage moron. It will have been 3 days when they get done.

Is that to me? I didn’t mention any time frames. Tell me what you want Blizzard to do differently.[/quote]

No, I was way out of line with that post (and it was not directed at you). I mis-read what he was saying so I apologize.

At any rate when I posted this thread the servers had already been down 6 hours, and Blizzard still wouldn’t tell us anything. I worked on Dangerous Waters for a while (mission designs) and came back 2 hours later and they had “just” put up they had a “slight network glitch”.

Now I found out that entire block of servers was not of the same caliber of their initial rollouts. They actually did use cheaper hardware thinking the servers would perform just fine under lower load conditions. 20 bandaids later, and they have to scarp them and do what they should have done in the first place. All to save a buck! :roll: