Gaaaa, now some a-hole is trying to scam my elderly mom

Anyone else here had to deal with this BS?

My mom has always had a healthy skepticism, that has stood her in good stead over the years, fending off the email scams, the fake tech support calls out of the blue, the “grandchild scam” etc.

But last week some jerk calls her up saying he’s an ex-student of my late dad’s, who supposedly “changed his life” and turned him around in college. That in itself would not be suspicious: a one time call to the widow of a former prof to express appreciation.

But wait! Come to find out, he’s called two or more times since then, as we figured out yesterday. We (her kids) told her that was definitely hinky, to not talk to him again, to let the machine pick it up unless it was one of us or a longtime friend. He calls this evening (and my mom let the machine get it) and she plays some of the message back to me after: classic scammer BS about “exciting things to talk to you about” and hinting about some outfit (charity? investment?) and going on to name drop old celebrities like Rock Hudson and Ann-Margret like they were involved somehow, asking her to call back to a certain number.

I’ve reported the number he apparently called from to the appropriate FTC site, and tomorrow I’m going to see about getting the phone co. to block it. Also going to call that number back myself and tell them to fuck off.

Anger-inducing. You can maybe block the number more easily through the phone and/or your phone company account website. That’s what I do with persistent spammers.

The GF’s dad was close to 90 when a scammer got his hooks into him. Her dad dreamed of winning Publisher’s Sweepstakes so he always entered it. He got a call one time saying he indeed won, and they would send him a certified check but he had to pay the insurance on the check, some $500.

He got as far as Wal-Mart where he tried to get a money order for $500. He was lucky because the clerk was kind and asked him what it was for, and when he told her she told him it was a scam and refused to give him the money order.

The scammer was some Jamaican and the guy got hot when he called back and discovered that the GF’s dad didn’t send the money order.

He was a sweet fellow but a bit naïve at this point in his life. He’d get a fundraising letter from Pelosi and thought it was a real personal letter from Nancy Pelosi to him.

Yeah, my father recently emptied his bank account for some bill collector. He couldn’t really provide details on what the bill was for, and he had declared bankruptcy so those bills likely should be gone. I’m pretty sure it was a scammer. Pretty gross to do that to an elderly man in the last stretches of his losing battle against cancer.

I had a guy call me and tell me there was some kind of judgement against me from 2009 and they were going to court tomorrow to file to collect. Tried to rush me into settling on the phone. Wouldn’t provide any details about the jusgement. I told him if he couldn’t send me information I wasn’t going to pay a dime. “See you in court, then” he said and hung up. Just another scammer prick.

My “favorite” may be the one where they claim to be the IRS and you owe a bunch in taxes, etc. Of course, the IRS ALWAYS calls you from a noisy bullpen full of people chattering in many languages, reads from an awkward script, and has zero details or even coherency. Say one thing about the IRS, when they think you owe them money, you will most definitely KNOW in no uncertain terms, all tied up in a bow.

The other one is the “we have a warrant for your arrest due to unpaid debts” one. That’s also disgusting and predatory, but somewhat hilarious as well.

The terrible thing is that they become more predatory the older the mark is. It starts with things like “appliance warranties” or extended car warranties, and goes all the way to fanciful delusions that snare only the elderly or mentally impaired.

My grandfather never revealed the details but he mentioned once, sort of coyly, that he had bought land in Baja California. To fulfill their end of the bargain (whatever it was) the scammer sent him some kind of “sailboat” that was at best fit for children, something larger than a toy and smaller than a kayak. It sat in the garage up on a rack, a trophy of embarrassment, gather dust for a couple of years until it was eventually forgotten. It disappeared eventually and was never spoken of again.

This is the first in a four part series that is a fantastic watch: https://www.youtube.com/watch?v=le71yVPh4uk

Basically, he infiltrates and takes apart a scamming operation in india

Oh yes. The BBC featured him in one of their programmes. It’s fantastic.

Say one thing about the IRS, when they think you owe them money, you will most definitely KNOW in no uncertain terms, all tied up in a bow.

As someone who has messed up their taxes, they will mail you a very official letter and it will actually be very polite and they will offer to help you fix your filing because the odds are you are just a moron.

Yeah, I had to iron out some hinky little tax thing awhile back, and even the State Dept of Revenue people I talked to were patient and solicitous. It probably helped that 1) it was nothing major and 2) it never escalated any steps beyond “Hey, there is an issue with your return; contact us and we will explain.”

Mainly, they wanted to quickly get the case to a final disposition. No hostility at all.

They go after immigrants, too, hoping they won’t understand the system and will pay.

BTW, does the third item down mean that Tom edited my thread title? It looks unchanged to me. 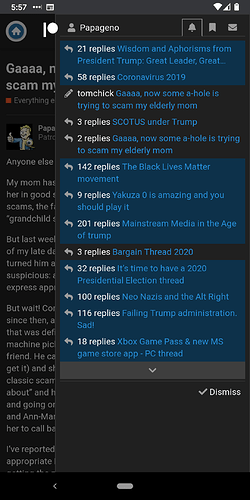 As someone who has messed up their taxes, they will mail you a very official letter and it will actually be very polite and they will offer to help you fix your filing because the odds are you are just a moron.

Yep. Been there, done that. And they don’t call you, harass you (well, not unless you really screw the pooch and like ignore their letters for a year or whatever I guess), or threaten you. They have on their website a very clear description of the means they have of getting what you owe, whether you like it or not.

When you are the actual baddest SOB in the valley, you don’t need to act like a cheap hood.

Anyone else here had to deal with this BS?

My mom, going on 87, is very skeptical and on guard. Yet one day she got a call from a sweet young woman who, it turns out, is the daughter of a woman who was the love child of my mother’s grandfather and his previously unknown mistress.

Or so she claimed.

She won my mother over by naming some of her cousins who live in Florida who my mother had lost touch with. So it had to be true! My mom even called her brother, also elderly, with the big news and he became excited.

The woman and my mother had a few pleasant phones calls and the woman wanted to come visit!

I will admit, I spent time debating whether this might, in fact, be for real. Even my bullshit meter was not working well.

Fortunately my sibling saw through it quickly and we each spent time explaining to our mom why this was a likely scam, even if the woman had not yet asked for money. She agreed, was angry, and cut off all contact with the woman.

Then her cousins wrote her, wondering why she had cut things off from the newfound cousin, and we realized that they too had been duped.

Do people still answer the phone from unknown callers? I know some older folk still do landline, but even those in my family who have one never answer unless its from a known number or they hear a familiar voice on the machine.

Do people still answer the phone from unknown callers?

It’s funny, I did that just before coming to skim Qt3 - but from my office phone, because some vendors that we work with and have open tickets with call in and I have to assume it’s them. It’s almost always a cold call, this was from HP and I have asked them constantly to stop calling and they still do (for years now). Maddening.

On my cell phone though I have Do Not Distrub turned on 24/7 so if you aren’t in my contacts, I’m only going to see you called after the fact, where I can then block the number (and delete the voicemail). Works very slick.

Do people still answer the phone from unknown callers?

Not me. Unknown number didn’t leave a message. Then you didn’t really want to talk to me.

Unknown number didn’t leave a message. Then you didn’t really want to talk to me.

That’s how do things. Seems reasonable to me.

Not me. Unknown number didn’t leave a message. Then you didn’t really want to talk to me.

That is how we do it. If you really want to talk to us you leave a message. If not, then we were right in not answering your call. We are very close to dumping the land line.