When I play if the last perk is good (usually fortitude of some type on most character) I start with that then work on Focus then go with Dust. Leaving most characters with a very high number of positive rolls. This usually works out pretty good with Advantage/Disadvantage too usually netting me a juicy +2 or if I’ve removed my x0 or -2 early in the scenario then Disadvantage doesn’t matter as much.

Not sure what you mean by this. That x0 is never leaving your deck.

Then not the x0 :) I didn’t know it was persistent and in all my play it seemed like after it hit once it didn’t come up again, I never checked a tooltip to see. Either way, the rest of my statement stands in my personal gameplay experience. Obviously, statistic nerds can go deep down the rabbit hole of probability but XCOM has disabused me of ever getting too stressed about that particular aspect of TBS.

All drawn modifier cards go to a discard pile (except bless / curse, which are gone forever). If the x0 or x2 was drawn (not bless or curse), you reshuffle the entire modifier deck at the end of the round. Same is true of the monster deck.

In the digital version, there’s a really handy display of what’s currently in your modifier deck (and the monster one) if you hover in the right place.

Thanks, Rho. I had forgotten about the persistent campaign in the boardgame.

I suppose it’s not a huge deal if I pick easy retirement goals, but it would be nice to be able to start with unlocked characters. I’ll look into making a request.

I had thought the digital version was all upside, but I’m revising that. I think it should explain scenario special rules more. Now that I got past what I guess were straight-forward early scenarios, I find myself playing scenarios twice, to recover from my failure to understand what’s really going on. To make up for that deficiency, I guess I’m going to be referring to the board game’s scenario book in the future.

Okay, in Harrower Hive, I have no idea how they interpreted which walls reveal which rooms or allow movement to hexes, because it certainly didn’t work how I expect. The scenario book doesn’t clear that up, and maybe it’s comes down to bugs in the digital version. I guess I need to consult the rule book. Why is that not a readable thing in the digital version?

Harrower Hive was brutal. One thing I felt like it should have warned me about was when I selected a stunned skeleton as the target for a mind control spell and it didn’t do anything on resolution because he was stunned. Well, shit!

Easy to overlook consequences, Gloomhaven has them. I remember taking a full five minutes—at least, come to think of it—devising an elaborate plan for my Mindthief to move a beefy critter onto not one but two damage traps (Doomed Compass FTW!), killing it and clearing a path for another character to move up and make his signature multi-target attack on the rest of the room.

It was an excellent plan, I was extremely pleased with it, and the results were going to be glorious.

I did not take into account that the Mindthief’s initial attack would immobilize the aforementioned beefy critter, and he wasn’t going to be moving anywhere. All was lost.

I did not take into account that the Mindthief’s initial attack would immobilize the aforementioned beefy critter, and he wasn’t going to be moving anywhere. All was lost.

I recently had a similar experience where I wanted stun traps removed, and then my MindThief drew a 2X and killed the monster instantlybefore he could be shoved.

I guess I need to consult the rule book. Why is that not a readable thing in the digital version?

Agreed. I’m assuming that this is oversight and not a deliberate change. But I house rule it that I can always refer to the book’s text.

But I house rule it that I can always refer to the book’s text.

By unanimous vote, the resolution is adopted.

So it turns out that the setup for Forgotten Circles scenario #108 is… intimidating: 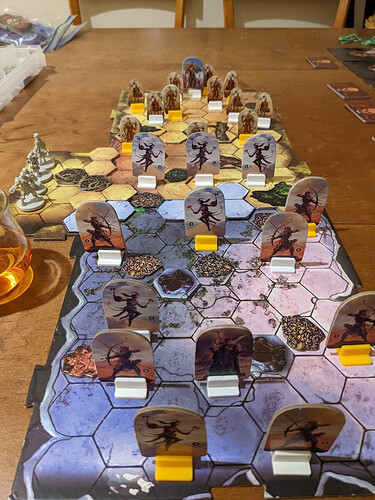 Did you bring a spellweaver with Inferno?

Digital keeps most of the table rules. I found that oozes have a 10 figure limit, which is a small blessing. But it doesn’t seem to preserve the notion of characters holding onto a personal goal card. I started playing a party of three, using four different characters rotating around, depending what it felt like the scenario would have or offer towards retirement. One retired, opened up Circles. Made a new Circles, and they were offered the same personal goal as another character.

I nabbed it. It’s the soccer mom one? So, the next scenario out, Cragheart retires, triggering Scoundrel’s soccer mom dreams to be fulfilled by having witnessed two other characters retire, and Circles then also retires for the same reason. One and done,100% win rate, baby.

The classes usually feel strong in different scenarios. Angry Face, though, is strong everywhere. They make things possible or even easy (though I acknowledge it’s hard for me to imagine how well another class would be doing in the same situation). I’m going to miss that class.

There are some personal goals that are the same objective but different RP/unlocks. I think.

Can someone tell me (spoiler if you feel the need) when Enhancements become unlocked? I’ve completed the last of the City Quests I had available, although it did unlock another Core quest. Temple of Elements, maybe? Anyway, I’m about ~16 scenarios in now, although I’ve done several side quests.

I’m playing the digital version, if that makes a difference. Thanks!

Enhancements require the achievement “The Power of Enhancement”. It should be close to available to you. It’s given by completing Frozen Hollow, which is unlocked by any of Ruinous Crypt, Gloomhaven Warehouse, or Abandoned Sewers. Let me know if you need any further pointers to it!

I think that should sort me out, thanks! I think the scenario you mentioned is unlocked for me. The name certainly rings a bell.

I believe it’s scenario #14. Just did it the other day!

Jaws of the Lion coming to Gloomhaven digital: