Hegemony III - It's not Total War, it's totally war

Let me know if defending your territory after you expand becomes too whack a moley. The initial stages of Hegemony I were really good, but once I expanded it became frustrating and tedious.It’s tough when games get so close to pulling it off.

I should love this because of the setting, but the gameplay ruins it for me. By the time I united Messapia, I was already spending way too much time scrolling back and forth between my armies and cities. I’m not impressed with the combat either. I wish they had made a turn-based game more like Romance of the Three Kingdoms XI instead.

I just re-downloaded myself. lessee how we go…

Snapshot: “A new expansion for Hegemony III is coming! Play as any of a dozen new factions of the mysterious Nuragic civilization to unite the new islands of Sardinia and Corsica and challenge the Roman, Greek and Gallic factions of the mainland for dominance of ancient Italy.”

@richardlgaines never returned from his re-install of the game 3 years ago. Who’s life will this new DLC claim?

Day one purchase. So glad to see this game getting more love. It deserves it.

I haven’t played this since it first came out, and I was pretty burned out on Hegemony at that point so it looks like I only have 6.5 hours in it. You guys are saying this is worth revisiting?

Been on the fence on this one for ages. Anyone know if this is the last of the content they’ll be adding? Got admit I’m a bit surprised given the release date they have circled back this long afterwards with this DLC.

To me the Hegemony series is one that was on the verge of coming up with something really good, but it had enough annoyances that would cause me to throw in the towel before finishing a game. I think the first one had bad whack-a-mole issues. I think the 2nd improved that some, but the issue was still there and I think there was something new I didn’t like about it. Actually, I don’t think I tried the 3rd, so maybe that is better.

I think the Pyrrhus of Epirus campaign (The Eagle King DLC) is pretty awesome. In the sandbox it’s honestly a question of setting objectives, you don’t need to capture every single city, just go for the hegemony objectives or set your own goal, e.g. conquer Magna Graecia or conquer Sicily, and if you have no good idea, go check the achievements… But if you want to get into again, then best wait for the DLC, it will come with a free patch (as always) and I feel they will add stuff like more diplomacy, so that should be interesting.

Yes, I can see that Longbow got other games to develop, but 4 years since the last DLC is a long, long time indeed. Hopefully, they used the time to polish their designs. :-)

Oh, they wanted to release a new DLC in 2018! Seems being an indie studio with limited resources and other projects on the table, is not ideal for mass producing DLC… ;-)

Well, I didn’t play No. 1 and 2, so can’t comment on them. In No. 3 I think I’ve read that they tuned down the rebel raider stuff, introduced difficulty levels, and as long as you don’t let fog of war cloud your territories you should be save from raider spawn.

By the way, Longbow uploaded a Developer Playthrough for their last DLC The Eagle King, when it was released - well worth checking out imho: 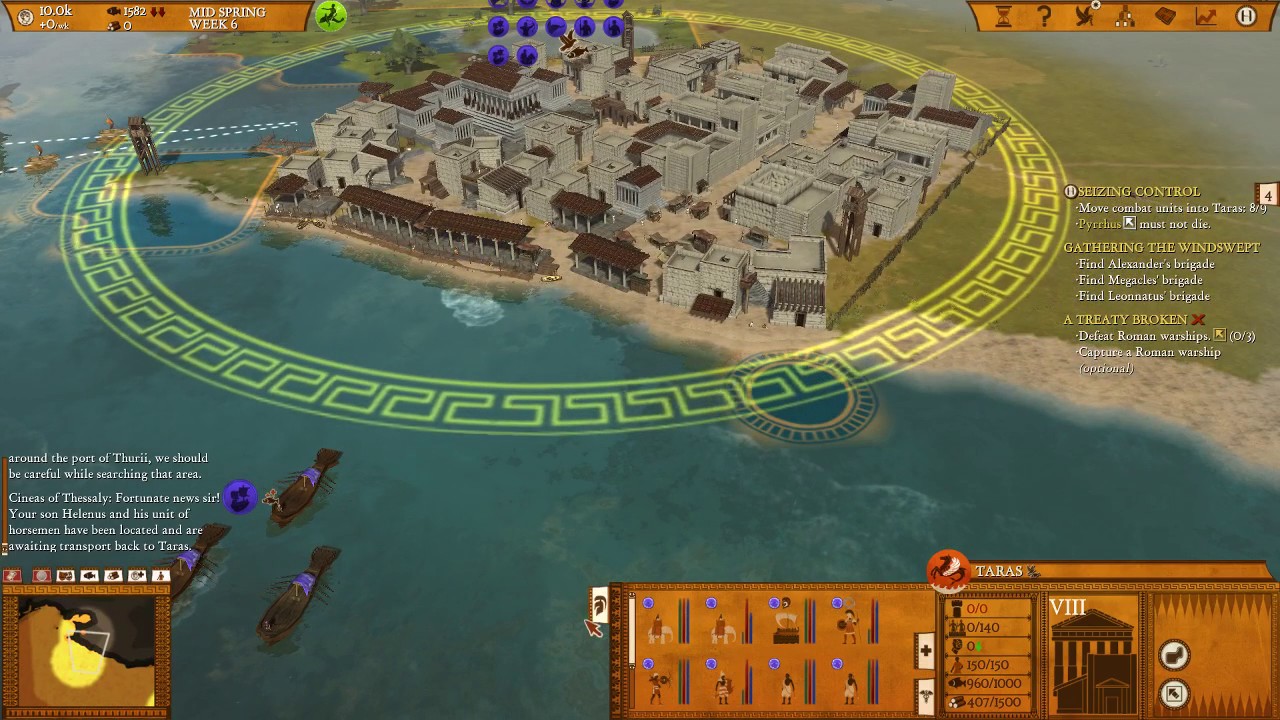 Easily recommend the ‘The Eagle King’ DLC for anyone who enjoyed the campaigns for Hegemony: Philip of Macedon and Hegemony Gold: Wars of Ancient Greece and was missing that kind of experience with Hegemony III.

The DLC campaign provides the player with a sense of narrative structure and short-term plus long-term goals whilst still having the freedom to either fail as Pyrrhus historically did or to rewrite the timeline and succeed in areas where Pyrrhus of Epirus historically underachieved or failed in Italy and Sicily. It’s neatly designed and scripted in such a way that whilst you will usually experience historical events such as the Battle of Asculum it doesn’t feel like Longbow Games are railroading you into certain campaign events or outcomes.

Plus if it’s the sandbox experience you prefer you get Sicily added to an expanded sandbox campaign map, a separate Sicily-only sandbox campaign for something with a more manageable and focused scope, plus the ability to start a sandbox campaign as a landless migratory\invading faction (like a Gallic tribe or the Epirote army), and some new Mercenary units to recruit to boot.

Easily recommend the Sicily-only sandbox campaign for anyone who feels overwhelmed by the scale of dealing with a sandbox campaign spanning all of Italia, and now also Sicily. The Sicily-only sandbox is large enough to have several factions involved yet small enough that you can typically limit yourself to fighting on no more than two different fronts at once. So, you can often easily establish a defensible position on one front and then focus most of your aggression and attention on the other. Handy for learning the game and graduating up to the full blown sandbox campaign, or The Eagle King campaign.

Did a playthrough of the Sicily-only sandbox campaign as Syracuse almost three years ago and had a blast with it.

Good summary, @Malkael - another review can be found here:

This is our look back at The Eagle King DLC for Hegemony III. Take control of Pyrrhus during his campaigns in Italy against Rome.

In a community project, the Hegemony 3 Wiki has been comprehensively updated. If you have been looking for a repository for game related knowledge, then check it out:

We are currently maintaining 993 pages (444 articles). Please feel free to contribute by creating new articles or expanding on existing ones. Join the 3 active and 26 total contributors today and become part of the H3 community! 1 About the Game 2...

Decided to go check the Facebook page on a whim to see whether there had been any updates and what would you know they posted one within the last 24 hours. Hopefully getting closer to an actual release date Isle of Giants. Figuring out who the 12 new factions are on Corsica and Sardinia should keep me busy for a moment though.

“Isle of Giants progress update! While we’ve been working on lots of new content for the expansion including an all new architecture set and map, we’ve also made some smaller updates to the original content that you might be able to spot in these shots.”

Glad to hear they are making progress.