Thanks. Yes, I was thinking of sampling rather than playing a full game, but I am not enough of a fan to want to sample some little corner of the changes, I wanted to be sure I am looking at a rough draft of the whole.

From what I understand, the 1.2 beta currently available is, to all intents and purposes, the releasable version of Cicero, missing only some localizations. The official release is supposed to be end of the week.

Will probably dive in tomorrow.

Anyone here play much on the Beta branch lately? I’m not naive enough to think they can overhaul so much and have things polished and bug free, so I am debating if I should dive in straight away or wait for the first hotfix or two.

I’ve enjoyed playing around with it, but I’m more interested in the EU4 update dropping next week so will play that over IR.

Yeah, the Manchu update sounds great. I really liked the China/Japan expansion but there were some frustrations with playing the Manchu that ultimately put me off in that region, particularly when the Ming just refused to implode. The new update sounds like it addresses all the things that prevented me from playing more games out there.

With 1.2 coming out soon, probably a good time to mention that Imperator: Rome is part of Game Pass for PC so if you don’t already own it and want to try out Imperator that might be a low cost method.

Not sure if the Game Pass gets Paradox’s updates at the same time as other versions, but perhaps?

There are some bugs mentioned in the latest dev diary thread, so beware.
I might get into this in 1.2, but I’m still a bit worried about having to micro some boring part. Still, it’s looking better.

Anyone here play much on the Beta branch lately? I’m not naive enough to think they can overhaul so much and have things polished and bug free, so I am debating if I should dive in straight away or wait for the first hotfix or two

I started playing this past weekend. I’ve had no crash problems except for a mod I tried. Yesterday’s patch has some weirdness too it, but nothing too severe. Note, though, my tolerance for bugs is much higher than the average person I reckon.

The changes are not surprisingly substantial. For civilized nations, only slaves can manually be moved now. Tribes can still move tribesman. There’s a host of buildings and city improvements to manage migration, promotions, assimilation and conversions. The result is a more organic change, but it can be at the same time quite slow. It makes for colonizing new lands a very long term affair if playing near frontier regions (e.g. the Bosporus Kingdom.) The move away from ‘mana’ is overall a positive one I think as there is less reliance on good monarchs to progress. I do quite like the internal management options as I tend to play tall-ish more than paint the map (you can now easily move province and kingdom capitals, yay.) Map painters I don’t think need worry too much about that though aside from queuing up buildings to maintain tech advancement (libraries, academies.) For large nations with “mega” cities, food management might become an issue, but I don’t have any direct experience with that as yet.

Oh, there’s some more flavor now too between different regions and countries. There are a lot of generic ‘traditions’, but some more notable nations have specific ones (much like back in the day when EU4 first adopted them.) The AI seems improved too (Carthage actually expands now, as does Rome.) 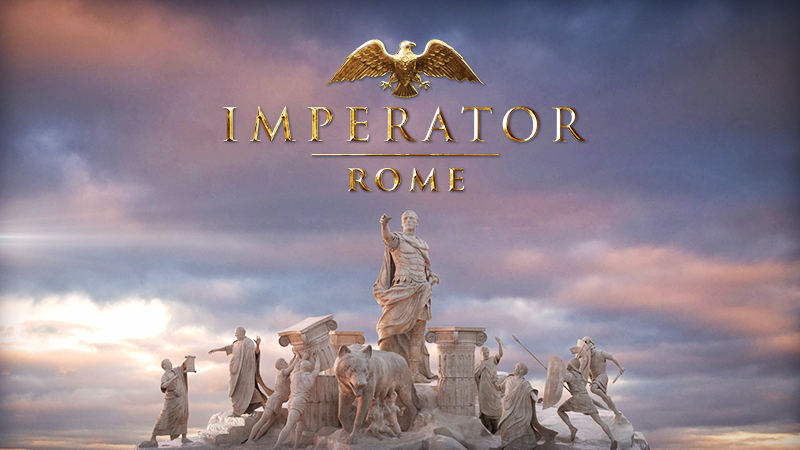 Hello and welcome to today development diary for Imperator: Rome! I’m Carlberg, the Art Lead on Imperator, and today we’re going to have a look at some of the visual changes that we’ve done to 1.2 Cicero. It’s also going to be a bit of a... 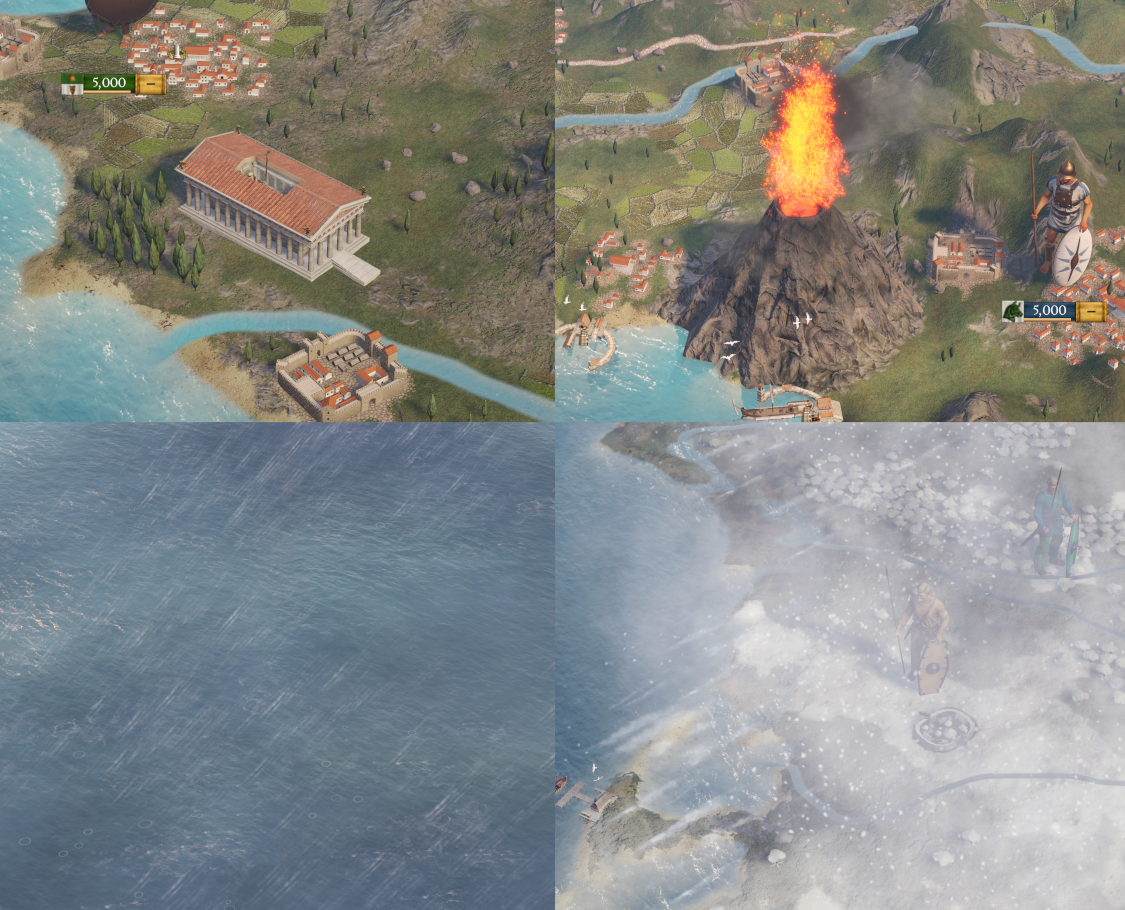 Surprising no-one (at this point), the patch releases tomorrow.

That is one monster update.

I think this may become my official video for taking my blood pressure. Man that guy us soothing.

I think Paradox should create a ASMR youtube channel, I’ve seen a few people saying several of the devs on streams have soothing voices.
(not actually serious)

Man that art is gorgeous.

So that’s what the Night King’s been up to.

I’m really liking the 1.2 Cicero update. I was a little nervous about them changing direction due to the mob, but in all honesty they really haven’t. Mana is there still, it’s just derived from things other than (primarily) your ruler stats. It feels better and more organic, while still having a resource that constrains and limits you so that you have to strategize on how and where to spend it. And because it’s not “Monarch Power” anymore. Basically, it’s just the refinement to the monarch power system I was hoping for: it’s still there, you just have more agency as a player in terms of how you generate it instead of being at the mercy of RNG.

The other changes all feel great, too. Having pops assimilate and convert over time instead of at a click of a button / expenditure of MP is a lot better and feels more organic. I really like what they’ve done in terms of province development and pop growth as well.

All in all, it just seems like a ton of refinement and some pretty solid steps forward. It feels a little more like a… I don’t know if I want to say simulation but that’s all I can think of. It feels more like a simulation instead of a game, if that makes any sense. No instant pop converts, no instant stability increases, and deriving monarch power (Political Influence) from the loyalty of the important characters instead of being directly tied to your monarch stats is good.

It feels more like a simulation instead of a game, if that makes any sense. No instant pop converts, no instant stability increases…

I just dove back in and started a new game as Judea. Where my province list should have been were three buttons that just said “words”, with nothing available to them. The sort of thingyou would find in Early Access.

I can’t find a reference to this anywhere. Is it just me? I’m going to uninstall and reinstall from scratch to see if that makes a difference.

Even after re-installing. No one else? Really? 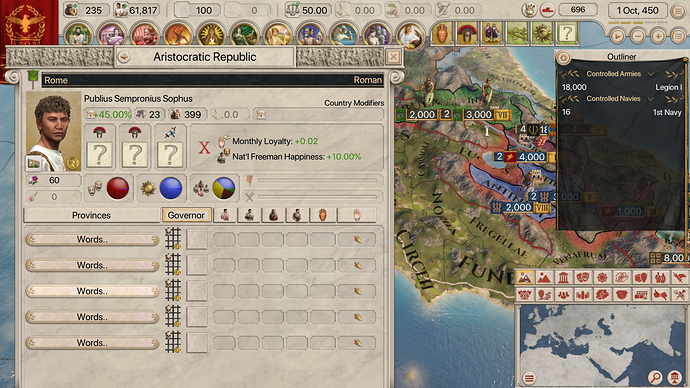