Tell him it’s a stripper pole.

A relatively inexpensive thing I can’t recommend enough are the stoneware enameled Le Creuset baking dishes. They are on sale a lot so you can find a full sized one for around $40 and they clean up so crazy well it is insane. Makes me way more willing to make all the things that are just a total f’ing mess to clean up in a pyrex baking dish.

This is high on my list of things to purchase, wanted it for awhile and just never picked one up.

I have a 10 year old Le Creuset dutch oven and it has no nicks or chips except on the rim, which I don’t care about and don’t notice unless I stop and look for them. The bottom is discolored and looks scratched to hell and back but that hasn’t affected the performance of it as far as I can tell. It’s the one piece of kitchen equipment I credit the most with affecting my end result. So many recipes just magically started working when I got one. If I was going to replace it today I would probably look at Lodge for sure, just to save a buck.

Le Creuset is obviously super expensive, but they have great warranties. I’ve taken advantage of it around 3 times—oldest one being like a 20 year old piece. Full replacements each time, at no cost.

I have a Lodge enameled dutch oven that I’ve had for 10 years or so. No chips or anything to speak of in the base, a small one on the lid, which was from me being careless once. I also have a totally unblemished nonstick pan that I’ve had for well over 5 years and pull out almost daily.

I also have one of those stupid microwave/hood things that doesn’t do anything. I have taken to using an induction hot plate on the patio for any high-heat searing I have to do.

Now that makes a lot of sense. Unfortunately I have no patio. I suppose I could use the fire escape, but then the pigeons and rats would compete to steal my ribeye!

I suppose I could drill a hole

What will happen if I drill small holes in a flatscreen monitor? Hardware and technical stuff

Will the whole thing fuck up, or will I have a working monitor with holes in it? Also, how cheap can I get a very high quality flatscreen monitor that doesn’t look like shit even when viewed from extreme angles? Also, what is the resolution like on these puppies? Thanks in advance!

My go-to cookware is a 100+ year old griddle that was passed down through generations and a round bottom wok from the wok shop.

Then comes the cast iron skillets. I have a diminutive 6" that gets a lot of work with onions and peppers and a couple of 10" ones.

Then, joining stusser is a couple of non-sticks that we use for eggs that we replace every year.

Then the once a month type things for cooking pasta; my 32 qt tamale cooker that I use for making Pho, and the various sizes of plastic bins for sous vide.

We need to get a wok. Burners on our range are setup to work with them super easily.

I bought this wok a few years back:

Shop Joyce Chen at the Amazon Cookware store. Free Shipping on eligible items. Everyday low prices, save up to 50%.

It is not round bottom though. It’s for flat burners. It has been a bit of a learning curve for me though because being carbon steel, it needed seasoning. BUT, woks are seasoned on a burner, not in an oven like I do with my cast iron. So it’s a slooooow process. You get a little patina in a first seasoning, then a little more and more and more over time. I like it when I use it, but I’m betting if this was a daily use item for me I’d have picked something different.

You can season it in the oven too, you just need to remove the wooden handles.

I, somewhat uncharacteristically, am fairly un-picky about my wok-pan despite the fact that I use it almost daily. I’ve used a succession of undefined non-stick pans that I found at Asian markets,and replace them every couple years as needed.

I tried to look up the pan brand at some point to figure out what the non-stick material was, but it doesn’t exist on English internet. So, it remains a mystery.

I only bought one wok. It is long gone. But I still have the spider that came with it and I use it all the time. And before the jokes start, I mean this, 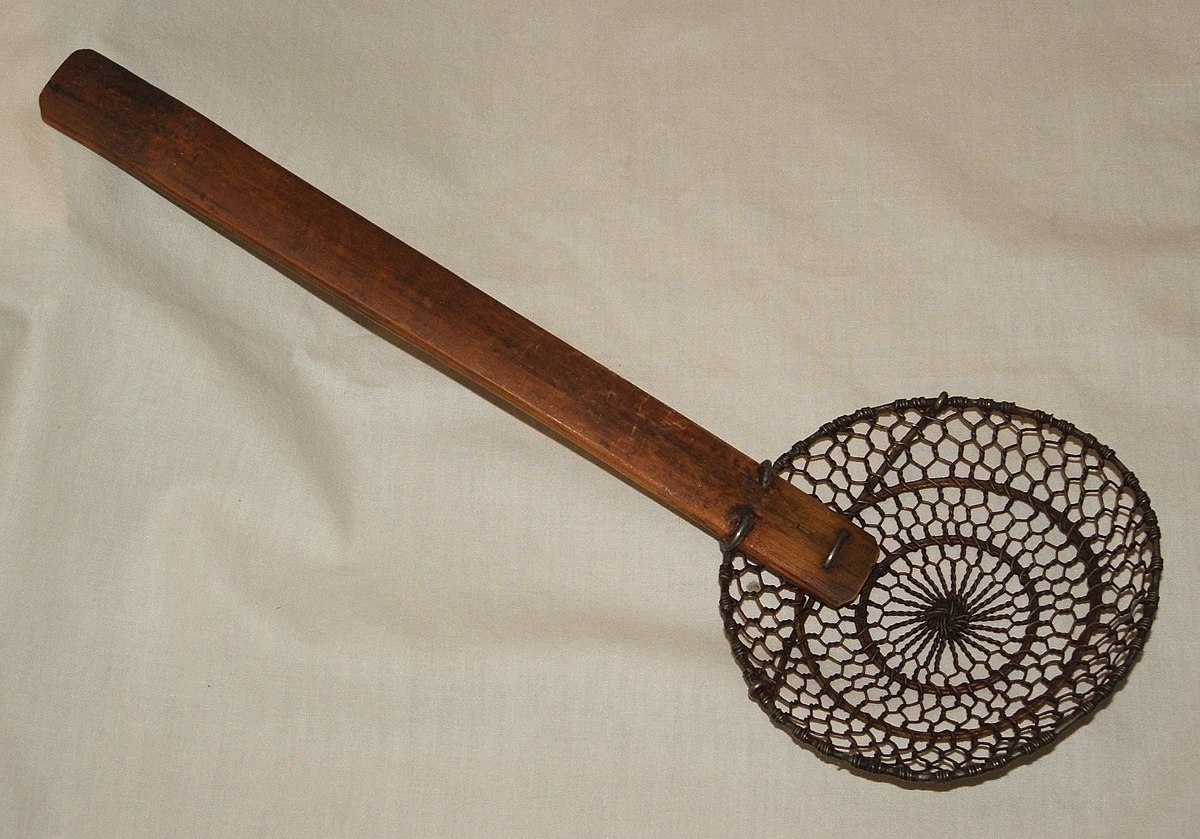 This thread is crazy: don’t buy expensive nonstick because it won’t last; enameled cast iron will chip. Both are true only if you mistreat it. I’ve been using the same Calphalon nonstick skillet for 20 years. My Le Creuset Dutch ovens are 10-15 years old. All are in great condition. Yes, I use them all regularly.

Same directions apply to both. Don’t use high heat with nothing in them (start the Le Creuset on low and let them warm up), don’t gouge them with metal utensils, and on the LC, don’t slam them into things. It’s pretty easy if you buy good stuff and treat it well.

Kenji Lopez-Alt did an Instagram video the other day where he used a metal fork in his nonstick pan and people freaked out in the comments. He replied that he does it all the time and the pan is 10 years old.

I have a non-stick frying pan that I use for a range of things, and I’m not especially careful with it, but it seems fine and usually lasts me a few years. I don’t use metal utensils on it in general (I have mostly wood or silicone in general), but it’s lasted a number of years. I use a fork in it specifically for omelets, but that’s pretty gentle, and mostly in the egg itself. And as noted, my work pan is some kind of non stick.

I think the argument against expensive non stick is not that it is fragile per se (e.g. saying to replace your egg pan every year is crazy) but because there is something than can theoretically break or wear out, whereas clad aluminum is basically indestructible and will outlive me unless deliberately destroyed.

My parents run a bed and breakfast and use their non-stick egg pans orders of magnitude more frequently than an average home cook, and theirs last years.

You can still use it as a pan, it still gets hot. It just gradually loses its non stick properties over time. Once eggs start to stick it’s time to toss.

I can’t remember the last time I used a non stick pan, I just use carbon steel for non stick, cast iron when I really need to sear something, and all clad for everything else.

I didn’t set out to season the carbon steel, it just happened because i use oil or fat for most things and when I don’t, I add a dash and wipe it down with a paper towel after use. But generally I don’t even do that. Nothing sticks to it, including eggs.

It is heavier than a teflon pan, I mean it’s nice how light those are, but I like not having to worry about scratching or replacing it every 5 years (my typical cheap shelf life for a non stick when I used them).

It just gradually loses its non stick properties over time.

No it doesn’t. Only if you over heat it or chip it. Don’t do those things and it will last a lifetime. I’m sure they probably do wear out at some point, but it will take decades if you treat it right.

Yeah. If I say that wasn’t my experience you could counter with, but you treat them badly. Even though I don’t, but can’t prove it here.