Let everyone see your shame in Ultra Street Fighter IV 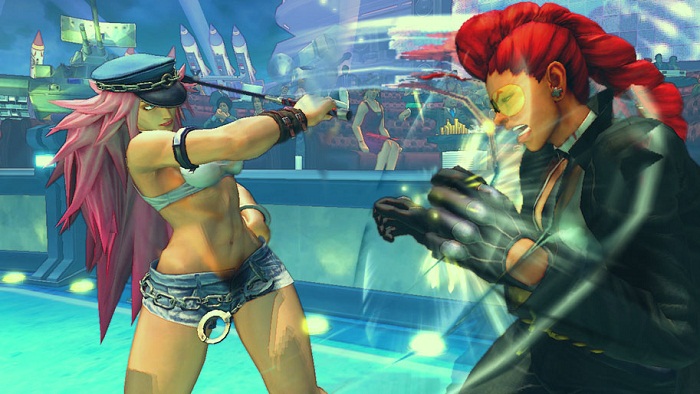 Ultra Street Fighter IV will allow players to directly upload a record of their matches to YouTube..

Whoa. That is some "outfit" she has on. Or at least a risqué choice of shading.

As to the video issue, fine by me. I long since gave up on the crazy execution needed in that game, but still enjoy watching those that can. This is also why I very much look forward to the imminent Gundam Extreme VS Full Boost to fulfill my fighter needs as it is much kinder on the muscle memory requirement, but still has a crazy amount of strategic depth and resource management. Oh. And badass mechs doing crazy Robotech like stuff to each other with 3d freedom. My PS3 is sooooo not done!

What is cool for the player is boring as all batcrap for others. I can't wait to turn my family into drooling zombies as I send them the 10th link showing how I totally kicked ass.

The introduction of imbedded yuotube uploading ability in games is simply a plot by intelligence agencies to pass secret data. There will be so much crap uploaded that their agents in China can upload in their games the plans to invade Taiwan and be safe from any Soviet cryptointelligence because there is not enough processing power in the world to analyse the millions of uploaded games to find that the Blanka opening of towards-towards-quarter circle back-light kick that corresponds to the 1st Amphibious Mechanised Infantry Division mobilization into spearheading the assault. Its brilliant because it fits so well into the age of narcissism.

I don't believe in conspiracy theories, I create them :)

You put the quotation marks in the wrong space. "She" would be more fitting.