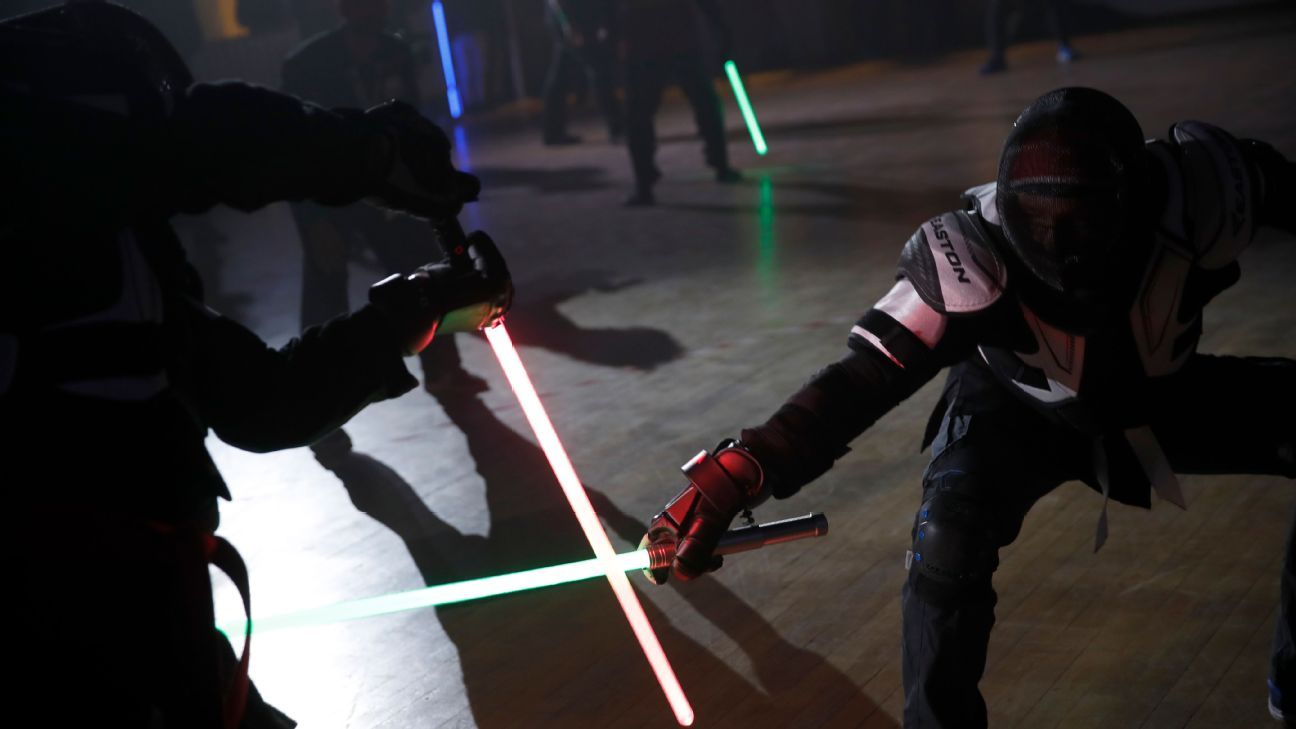 Blows only count if the fighters first point the tip of their saber behind them. That rule prevents the viper-like, tip-first quick forward strikes seen in fencing. Instead, the rule encourages swishier blows that are easier for audiences to see and enjoy, and which are more evocative of the duels in Star Wars.

How do they keep those things from breaking?

So… kendo with plastic toys?

It’s probably not that remote from the rubber practice swords for beginners… well excepting they seem to be hosting tourneys with those.

I did real fencing in college, and wow did I love it. Was quite a bummer when I had to stop. When you have matches that last more than a few minutes it is insanely exhausting. You use muscles you never knew you had in your legs and butt.

I did too (in early school), and I distinctly remember that exact same experience: crazy exhausted for what was supposed to be, at first, a storyreading little boy’s dream!

My best fencing match ever I was classed against someone with 10 years experience over my 1.5 semester of drills. He was cocky and a bit nasty but I digress. You need to win by 2, and we were the 3rd to last match of the day. We’d both won our previous matches to be in this finale and it… went… on… forever…

He’d go up by 1, then I’d tie and go up by one, then he’d win the next two, then I’d win the next two. 10 minutes on everyone else was done standing around us with their mouths open lol. He started cheating to try and force a win, and I’d have to keep pointing on the judges to disqualify his points. Another 10 minutes every muscle in my legs, arms, butt, back were in agony. Finally he goes up by 1, and we set for the next point. We tap blades and my foil just falls out of my hand LOL. I no longer had the strength to grip it. He looks at me, I shrug, and he just taps me in the chest.

I don’t have any such great story to share. Instead, as a token of appreciation, here is a reportage from 1967 of the last duel for honor in France, between state assembly members Gaston Deferre and René Ribière. What I find touching on that video is how nervous they are, the blades being real and very lethal weapons.

Ribière’s blood was drawn twice, at which point the fight was stopped.

Who would win in a duel between Trump and Nancy Pelosi?

(Stupid question. He has a longer reach and she looks pretty frail.)

Who would win in a duel between Trump and Nancy Pelosi?

Maybe. I think he would be out of breath after 45 seconds. She would just need to run around him for a few minutes.

True, but he also has extremely thin skin.

True, but he also has extremely thin skin.

THAT ought to deter Germany.

Are they training in one of the seven forms of light saber combat?

Yeah, neither one seems to be making any risky moves. Both very cautious.
Thanks, @Left_Empty for your commentary. I would otherwise have had no idea as to the context of what I was watching.

Maybe. I think he would be out of breath after 45 seconds. She would just need to run around him for a few minutes.

True story: I was in a team tournament once where one of the other teams was captained by an ex-national team member. It had been a very long time since he fenced, and was refereeing and coaching. He captained the team just so young kids from this club could form a team and he could give them some guidance. He was out of shape, and obviously enjoyed good food. I ran him up and down the piste until he was exhausted and then hit him 5 times. A little while later, somebody came up to me and said “What did you do to him? He looks like he’s having a heart attack !”

Back on topic. Lightsabre battling sounds fun. I wonder how long it will take for the fencers to min-max their techniques to take advantage of the rules and make it look like something completely not like a Star Wars light sabre duel.