I didn’t want to post this in the other pet topic because well that’s cheery and this is not. I lost my eldest cat today. This is the last of the family pets, the pets we acquired while living at home at kids really. Of the three daughters, I was the only one that took one with me I intended to keep until the end of his days, which I did.

His health began going downhill pretty quickly a few years ago; wwe medicated him and got things under control, but he was literally half the cat he was, pound-wise, after that but managing. During a conference call today, he suddenly collapsed, and we buried him in my backyard several hours later. I’m thankful to have a backyard where I can do that.

I will say I am grateful to my sister. I sent her a really cryptic message this morning saying I think my cat might die today, and I am not done with this stupid meeting. She asked me if I was okay. And I said no, i don’t think I will be and the vet can’t make it until this evening. A few hours later, my mother showed up with supplies we might need to put him down and, and we had to.

I kind of promised myself as the years went by that maybe it was time to go petless, not deal with the issues and the loss but the little guy I still have was a litter dumped at the local mall in a cardboard box left in the rain. Almost all his siblings went out to co-workers since a co-worker rescued them and they were so small the shelter would not even take them.

Now I’ve been advised to go to the family birthday party to bask in the warmth of family. They’re kind of concerned I will disappear and mourn for days in solitude. They’re not wrong, but I would emerge again, eventually.

Sorry, lots of words. Felt good to write it though.

Losing a pet is so hard. I’m so sorry for your loss. I’ve never subscribed to the thought of being petless after a loss. In fact I’ve adopted a “always have 2 cats policy.” When one dies and I’m left with one, I always get 2 kittens. Then when one of those kittens is the only one left, 2 more.

Sorry :( Its rough, you are doing the right thing.

So sorry for your loss. Non cat lovers don’t understand it, but the connection is just as strong as any other pet. Having lost cats myself, I know how difficult it is. Try to just think of the positives.

When King died a few years back, it was pretty rough. But, ultimately, you had a cool cat and gave them a good life. The end it always hard, but it’s worth it for all the years of having a cool little buddy.

Give it some time, and after a while, go to the local shelter and find another cat that needs someone to help it out.

I’m very sorry for your loss, Nesrie. Mourn your friend. Remember the joy he brought you and you brought him.

Deepest sympathies. We lost two dogs in the span of a couple of months last year, both to cancer, so I can certainly relate.

It hurts to have this happen, but they bring so much joy to our lives.

It is a sad thing. When my dog died I was too sad. I’d just break down and cry for no reason. This lasted a while. I realized I cared more about my dog dying than when my grandparents would. Since then, two grandparents gone and it was true. Pets do dumb things but it is okay. It is part of why you like them.

Sorry for your loss, Nesrie.

My deepest sympathies as well, Nesrie. The loss of a pet is hard. Take time and remember all the wonderful joy your friend brought you. Frame a new picture to remind you and dont worry about a happy face for the family. He was your friend.

Yeah I went though this two years ago and it was bad… and “only” losing a pet. It made me kind of terrified thinking about what it’ll feel like eventually when the loss is, uh… human.

I’m so sorry to hear about your loss, Nesrie. I’ve been there before, too often. While I realize even the kindest words won’t erase your pain, I hope knowing you’ve shared so much love and created such a wonderful life for your eldest will help you find solace.

Losing a pet is so hard. I’m so sorry for your loss. I’ve never subscribed to the thought of being petless after a loss. In fact I’ve adopted a “always have 2 cats policy.” When one dies and I’m left with one, I always get 2 kittens. Then when one of those kittens is the only one left, 2 more.

Wait, what? Do you have some sort of kitten Thunderdome to eliminate one of the two kittens?

Wait, what? Do you have some sort of kitten Thunderdome to eliminate one of the two kittens?

Haha. No. The kittens grow old together, one inevitably dies, add 2 kittens. It’s my crazy system where I sometimes have 3 cats and pretend I’m not a crazy cat dude.

I’m so sorry Nesrie. I wish you the best.
And thank you for making this thread, as for the same reason you exposed, I didn’t want to clutter the other thread.

My pet cat was residing at my parents. He had chosen their place: he never liked my appartment. When I moved out of the country, he obviously stayed with them. A couple of years ago, my dad was diagnosed with a very, very bad cancer. I am pretty sure our cat contributed a lot to his mental welfare. My dad miraculously survived for the time being to his disease, and I think it is due to no small part to the cat he loved. His lifework done, our cat passed away last year after his own long disease. It’s been over a year now. My parents don’t want to have another pet, but I can see how depressed they are, and I think they are doing a mistake by not having a new member into their family. I don’t know how to convince them otherwise.
Anywhere, here is to our “pépère”, and the last picture I took of him, when I last saw him, two years ago. 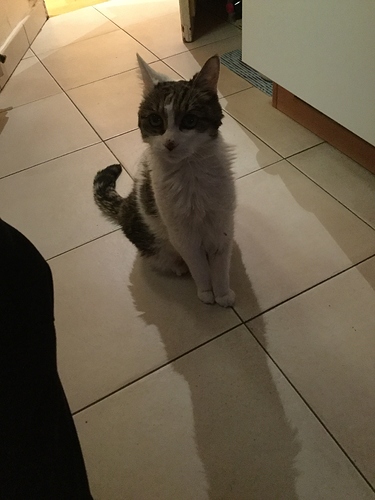 Very sorry to hear about your cat Nesrie. All I can say is, never go petless. Yes, there is the inevitable loss and the misery that comes with it, but it’s a small price to pay for the many years of love, comedy, chewed furniture, great times and memories that come before it. Besides, it’s a two-way relationship, think of the happy times you’ll bring to another pet joining your family. Having two pets incidentally is so much better than one. Ok, there’s twice as much fur, and twice as much food to be fed, but due to a complicated mathematical formula there’s approximately 17 times as much fun, love and comedy to be had! And when that fateful day comes again when you have to say goodbye to one of them, the other will be there for you (and you’ll be there for them).

Thank you everyone. I appreciate the empathy and the shared stories.

I went to my family gathering tonight, really thinking I would fall apart because my great aunt always has 4+ animals. I think she has 5 now, a couple of the cats hide a lot. Anyway, we shared pet stories. I tried to avoid it to keep the birthday party about the birthday party but my great aunt has lost 4 pets in as many years. Just illness, cancer, health issues. My family has always been big on pets, and they kind of reminded me that this generation of pet, well mine was only one left. The others adopted or born around that time had been gone long ago. Maybe I didn’t make the perfect choices all the time but I must a made quite a few to keep him this long.

No worries. I mentioned earlier about my hesitation and inclination to go petless even before my eldest cat started showing his seniority because i knew it would be hard, very hard when he passed. I never imagine it would be as bad as it was today, but hard yes. My young cat, well people have suggested a playmate for years but I couldn’t do that to my senior cat. He was more than a little peeved when I showed up with the first grey puffball. They found some level of indifference to each other, at least.

His lifework done, our cat passed away last year after his own long disease.

Aaww. I am sorry to hear of this loss. My great aunt didn’t want another dog after the last one too, but the little Chihuahua she’s had for 4 months now, you’d think they’d been attached at the hips for years. He’s so into her it’s cute, even though I don’t care that breed much.

When I can rein in the emotions again, I’ll think of a plant or a marker… something to put over his grave and probably feel some closure then. Although I am not sure I can ever sell my house now with him resting here!

I understand what you mean, when we lost our cat Mouse (sorry for that name, he just ‘was’ a Mouse) I did not even want to consider replacing it with another cat either. But fairly soon I started to miss having a pet around the house. So we got two rabbits, which turned out to be a mistake. So I stopped thinking about another cat as being a replacement and we got two kittens, which worked out much better, even though one disappeared after a year.

The remaining cat is by no means a replacement for the cat I lost, it simply cannot takes his place. But he is a joy to have around in his own right, and I’m glad we got him. In other words: this isn’t about replacing as such, more about the necessity to have a pet around.

Ans sorry to hear about your loss Nesrie. But good to hear he has had a great life around people that cared for him!