Just had my favorite counterplay to Leader happen. He played Leader and copied the hazmat i played on wong and my typhoid mary giving me an extra trigger of hazmat and the -1 from mary. 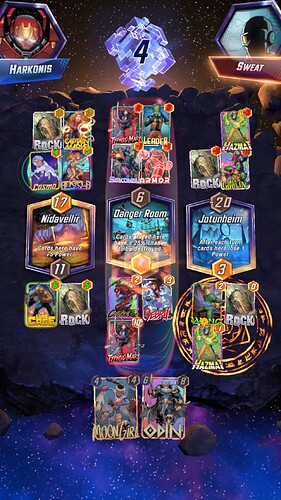 Just grabbed Aero from the Token Shop, my first purchase there. Fingers crossed I can find a good combination with existing cards!

honestly Aero can work in almost any deck. Last turn if you are doing well you guarantee their power is where you want it. That’s ignoring all the other fun stuff like making them carnage the wrong lane and stuff like that.

I got another Series 5 card in the Token Shop: Bast (Set the power of all cards in your hand to 3).

I’m not going to pick it up, but it’s nice to know that the Series 4 and 5 cards are cycling in regularly.

No series 5, but I have seen series 4 Mbaku and Helicarrier.

I’ve had Galactus and Valkyrie show up in my token shop.

This was a goofy win.

My opponent and I were probably wondering “what the hell deck is this?” It then hit me afterward: I was messing with a buncha decks and the last one I was looking at, and therefore was selected, was my “these are the pool 3s I have so far.” 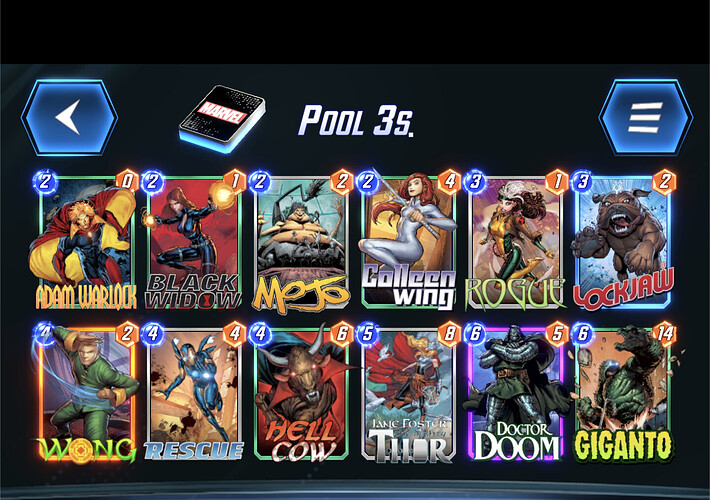 That isn’t even accurate as I’ve also, since then, gotten Human Torch, Brood and Magik too.

So Thanos popped up on my Token shop, but I only have 3200 tokens. I pinned him but how long would it take to get 2800 tokens? I’ve only gotten 200 since this started to go with the 3000 bonus for my level. Seems like it’s not worth waiting that long for Thanos.

The token acquisition rate depends on how far in CL you are. See this Reddit post for the math:

r/MarvelSnap - A quick summary of the token shop and some math for the value...

Also note that cards will become cheaper over time: new cards will get added to pool 4/5, and old cards drop to pool 3 to compensate.

Why do you want Thanos anyway? It seems pretty narrow in utility.

I didn’t even have the full math rundown like the above, but as tempting as the Galactus offer was, I’m going with “I’ll get three strong series 3 cards to build decks around” as it’s my impression that Series 4 and 5 cards really need a strong pool of series 3 to build off of each other, and I’m not there yet.

Cool thanks. I guess I thought Thanos was supposed to be super great but I think I was mixing him up with Galactus. Or another Uber card, hehe.

Currently I’m trying a no abilities deck with Patriot. I have Cap and another powered card due to not having enough no abilities cards but so far it’s pretty fun. It seems to be very adaptable which I like.

Why do you want Thanos anyway? It seems pretty narrow in utility.

I don’t know about anyone else, but I’m excited to try to build a deck around the Infinity Stones. Seems like a fun gameplay mechanic.

Whew, after struggling for a few days, managed to put together a solid run. I made it to rank 69 3 times before finally putting together the last wins to put me over the top for 70.

Don’t think 80 is possible, but Ii got the variant, unfortunately it is Luchador Drax, which is cool enough looking, but Drax just doesn’t really see play. Jessica Jones, Warpath, and even White Queen are just better.

Still 70 was my goal for this season, to get that variant card. And it was reached.

unfortunately it is Luchador Drax

Does everyone get the same Level 70 variant? I can’t imagine they do. Last season mine was Skottie Young Ant-Man.

I think its random variant for a card you have. At least I assume so since everything else is

I had a rough streak of losses trying out my discard deck today, but then I ended a win (with a Snap) with a final turn play of Gambit on an empty Bar Sinister, destroying four of the opponent’s cards, “discarding” the only card I had in my hand each time—Apocalypse. Who I didn’t need to actually play, because he got Dracula’d into one lane, while all those discards threw a nice +10 onto my Morpheus in the other lane, further padding my lead there.

Feels good when it all comes together like that!

Token shop FAQ, I knew most but not all of this:

MARVEL SNAP is a fast-paced card battle game. In the game, you will be able to choose members from the Marvel multiverse to build your own super hero team.The game is simple and straightforward, with no numerical growth. Just download the game! And...

My current decks that I’m messing around with. Solid results from Sorcerers Supreme and my Midnight Sons Discard, and funny results from my Lockjaw/Jubilee RNGesus deck. Trying to learn Mr Negative and dabbling with a couple decks for him. 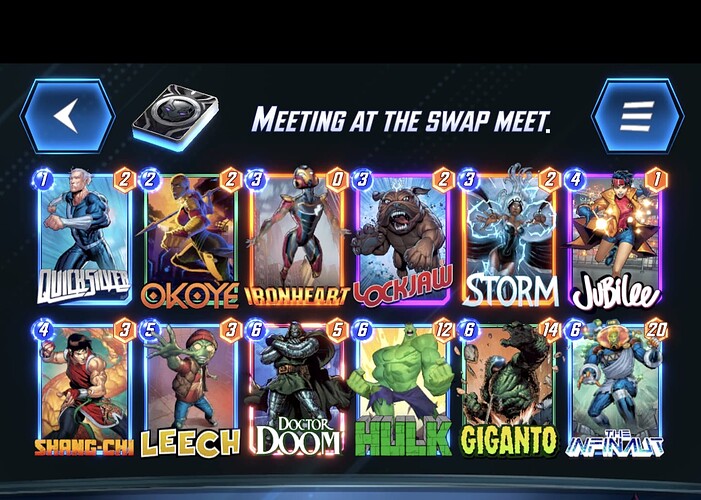 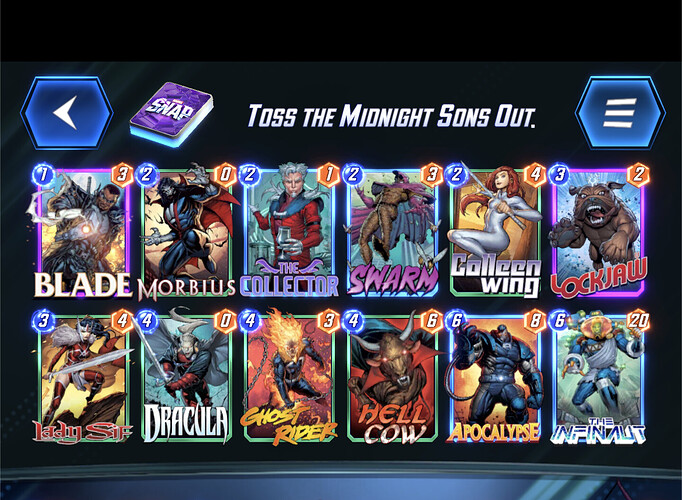 Aww man, they retreated as soon as I snapped.

Funny mirror match, Weirdworld came up and both of us were apparently running Death Carnage decks. I started with Death in my hand, then drew theirs. Was about to play only carnage on turn 4, which would let me play She Hulk and Demon turn 5, and double Death on turn 6

Now don’t get me wrong, retreat was absolutely the right call for them. But they had no way of knowing just how screwed they would be (the only problem would be they could draw my Shang Chi)

How is She Hulk working for you?