Orphan: First Kill: if you thoughts hobbits were awkward...

...no one would look at actress Isabella Fuhrman today and mistake her for a nine-year-old child. So Orphan: First Kill made the, uh, interesting decision to cheat.

This is a companion discussion topic for the original entry at https://www.quartertothree.com/fp/2022/08/20/orphan-first-kill-if-you-thoughts-hobbits-were-awkward/
Telefrog August 20, 2022, 11:53pm #2

The concept sounded crazypants to me when I heard about it. Orphan was a terrific showcase for pre-teen Fuhrman to kick around a bunch of evil little girl tropes, especially when playing against Farmiga’s harried mother, so I’m all in on Fuhrman. But a prequel starring the obviously much older Fuhrman? Super nuts! I figured either they’d just handwave it and have the rest of the cast act like they can’t tell the difference between a 10-year-old and a 25-year-old and hope the audience buys into it, or have a lot of CG shenanigans.

Good to hear it’s not all camera tricks and goofy CG.

I was not interested in this movie. Now I am, as a potential study in the Uncanny Valley.

It’s really jarring, too. I’m not sure make-up could have done anything, because it’s more a function of, I guess, facial structure? Or maybe a function of baby fat/body fat? I can’t imagine Fuhrman has any left after The Novice. But her face is so much more adult, so much harder now, and it’s so obvious that this is not the face of a child.

I guess it just goes to show how much an Orphan movie needs Fuhrman. And it could have been worse! I found the CG in the Irishman waaay more distracting than all the Dorfing in Orphan: First Kill.

I was not interested in this movie. Now I am, as a potential study in the Uncanny Valley.

When they were shooting Orphan: First Kill, that’s probably the term they used for the trenches they had to dig for Isabelle Fuhrman to walk alongside the other actors.

By the way, I just noticed that the whole front/back thing is even part of the marketing strategy! Notice the difference between the posters for Orphan and Orphan: First Kill. 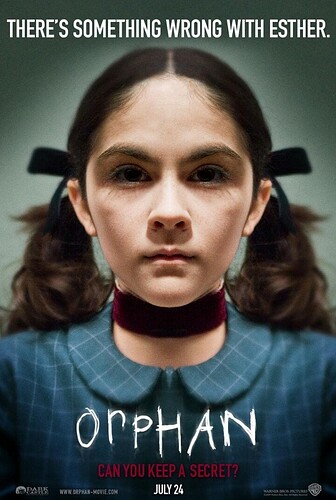 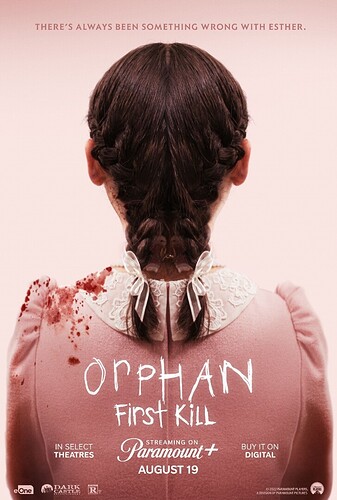 
* I suspect there’s a solid Tatiana Maslany reference somewhere around here, but I’ve never seen the show so I can’t find it :(

I would have titled it “I Still Know What You Did Last Orphan” but that’s probably why I don’t work for a Hollywood studio. I had no idea this was even a thing and yeah, the thought of seeing the now grown child actress playing the same role but even younger? I might just have to check that out.

I’ll wait for the Pitch Meeting video on YouTube.

This movie was so much better than it had any right to be. My wife and I enjoyed this greatly. Our thoughts pretty much ran along the same lines; at first, fascinated by how obvious it was that she was a grown woman, and later gobsmacked by how batshit the movie got.

It would’ve been super easy to make something fairly rote and predictable here. I’m glad they did not.

I added it on my list to watch it but I still have not. I think it’s time lol.

I’m not sure make-up could have done anything, because it’s more a function of, I guess, facial structure?

Finally sat down and watched this. For me, the issue was Furhman’s head size. When they switch to long or back shots of the character, they’re obviously using a real little girl and her head is the right proportion for a 10-year-old. When they use Furhman, her head is the same size as the full-grown adults in the scene with her. It’s especially jarring in the scenes where Julia Stiles stands right behind her and brushes her hair with the camera facing them for the mirror’s POV - like the image in this article. No one could mistake her for a 10-year-old girl.

That said, what’s really vexing me now is the titular “First Kill.” Whose first kill is it referring to? Furhman’s? That can’t be right. When we are introduced to the character, she’s already been institutionalized in Estonia for killing a family off-screen. (Oh boy. I guess we can wait a decade for the prequel to this prequel.) I don’t think it’s supposed to refer to any of the other characters either. Bah! So much for truth in advertising Orphan!

But then the third act happens.

Yes! This saved it for me. Honestly, until the turn I was getting bored of the fake little girl invading a family rehash. Thankfully, the writers knew to have fun with the concept this time around.

For me, the issue was Furhman’s head size.

Yes! That’s exactly it! Now that you’ve pointed it out, it’s such a “no duh” thing that I can’t imagine what the filmmakers were thinking. Sure, you can cheat the verticality, but without taking proportions into account, it just looks absurd, doesn’t it? That’s so clearly the issue now that you point it out.

That said, what’s really vexing me now is the titular “First Kill.”

That’s hilarious and it didn’t even occur to me! That subtitle has the strong stench of a marketing department.

Yes! This saved it for me.

Right? So glad you stuck with it. I also came really close to just bailing. 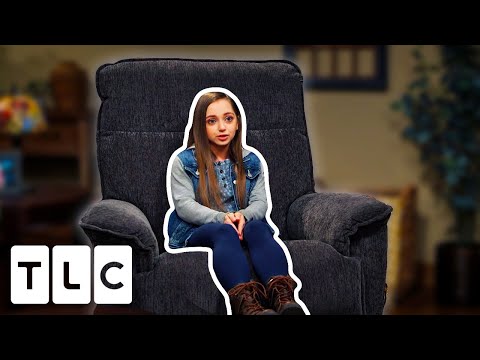 Should I be scared to press play on that video? It looks like it might be even freakier than Orphan: First Kill and it doesn’t even have Isabella Fuhrman!

It’s weird but it shows a real-life person with the condition. I’ve seen others with a similar medical issue but this is the first one I’ve found where the adult really does look like a child. Usually, there’s something about the face that gives you a clue that it’s not a normal child.