Out of the Park 21, Baseball fanatics and Perfect Team Junkies Report March 20th

Another year, another edition of Out of the Park is on the horizon.

The interesting bits to me seem to be the revamped scouting and draft systems. You will be able to do mock drafts, and they reworked hs, and college player progression.

Perfect team adds 2 more league levels, with there now being just 1 Perfect League, allowing them to crown an overall Perfect Team champion each week. Everyone that doesn’t make the playoffs gets relegated from that league. No details on whether they improved the auction house search interface, or allow you to mass sell cards, which would be nice.

I’m psyched for this in particular. It’s also supposed to have improvements made for feeder leagues, which is long overdue (which I now see you noted in your paragraph following the list).

I preordered yesterday, looking forward to it. I got four seasons into last year’s game as the Padres, so I’m torn whether I’ll continue that, start a new Padres game, or go Expansion/Fictional.

Most interested in the Draft and Scouting improvements. I played Perfect Team for the first time this year (not totally comfortable with the monetisation aspect) and don’t think I’ll be going back to that, though I know it is popular on here (reading this forum’s Perfect Team thread actually convinced me to try it).

They had a ‘first look’ on Twitch last night (https://www.twitch.tv/videos/557492115) with a ‘Franchise Deep Dive’ scheduled for March 2 and a look at Perfect Team on March 9.

Hmm, they are also working on OOTP GO for mobile, which is somewhere in between the old MLB Manager (a pretty rough mobile experience) and OOTP 21.

It will use OOTP21 's engine, will have the same 3D games, and will have minor leagues for devices that have the memory - though it seems to be geared towards delivering Perfect Team on mobile.

Yeah, with perfect team you get to a point where it is pretty much on auto pilot while you wait for points to pile up to buy something. I might play 1 team for a bit, but I just dont have the time/patience to scour the auction house for deals especially with the rather crap interface for doing it.

With your Padres games cant you just bring it over to 21? I moved my fictional league based on the Sovoet Union from 19 to 20, and it seemed to deal with it ok.

Yes, that’s what I meant - either import my 20 Padres game, or start a new one. On the one hand, I have a good team and some great guys in the minors, and on the other, the new fun-ish Padres roster from this year.

The mobile version was supposed to be out with 19 so… consider me a skeptic that it ever releases.

The Franchise Deep Dive on Twitch took place and I watched it so you don’t have to.

Scouting is much more involved, as the accuracy of your scouting report depends on (as well as the usual budget you’ve assigned to each level) how often you scout a player, or a group of players. Eg you can request that an individual player be scouted, or for example, second basemen. And within that group, you can focus on 2nd Basemen who are contact hitters, for example. So then you might have High Accuracy on the player you’ve scouted, but Low on his teammates, or you’ve got better info on the pool of contact hitting second basemen or infielders or whatever.

This will lead to if not compromises, then scouting management of some sort - for example after the draft pool is announced, you will want to devote resources to scouting those guys, and then after the draft, ramp up your other scouting again.

Not sure if I like this or not but it likely adds something. I expect you can just leave it as it was last year too.

A good thing is that you can configure your scouting screen, so you can have your scout and OSA’s scout side by side for comparison purposes (I think). Not just the stars but the scouting report blurb and the graphs etc.

There’s also a ‘Incorporate Stats into Scouting Reports’ setting which will incorporate the player’s stats into the report on some level. The guy said that the more accurate the report, the more it would highlight unsustainable BABIPs etc o_O

I’m not that into drafting so I’ll just leave the Draft Pool (which you can see at any time during the season now, not just at draft time) screen here: 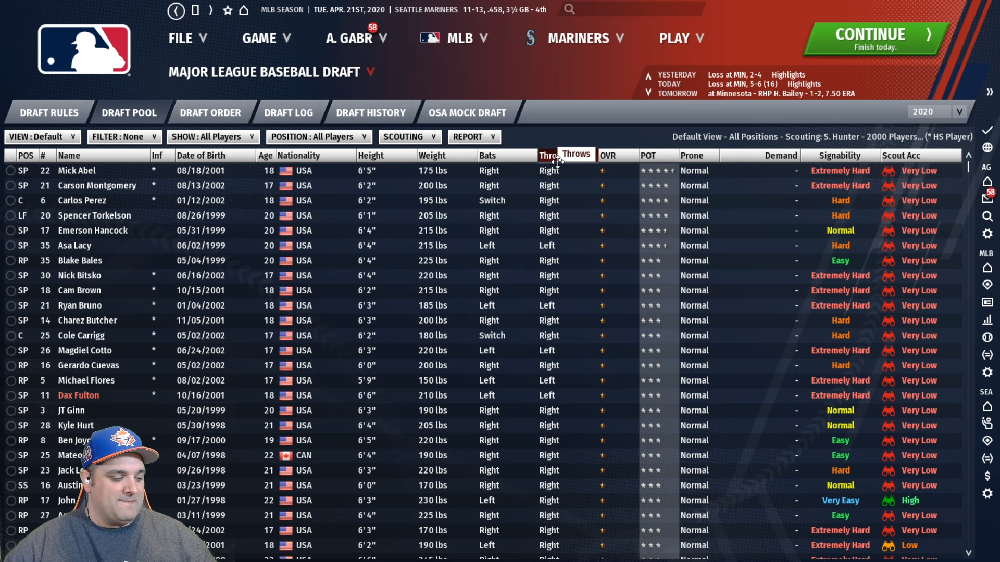 There’s also a mock draft you can see (dunno if it is just a report or whether you can participate and make a pick) based on OSA ratings which will give you a rough idea if other teams like your guy etc.

This is a really nice screen which is basically an expansion of the Top 100 prospects list - but it goes to 200 prospects, you can filter by team, position, all that good stuff - shows stats and you can drill in to ratings. 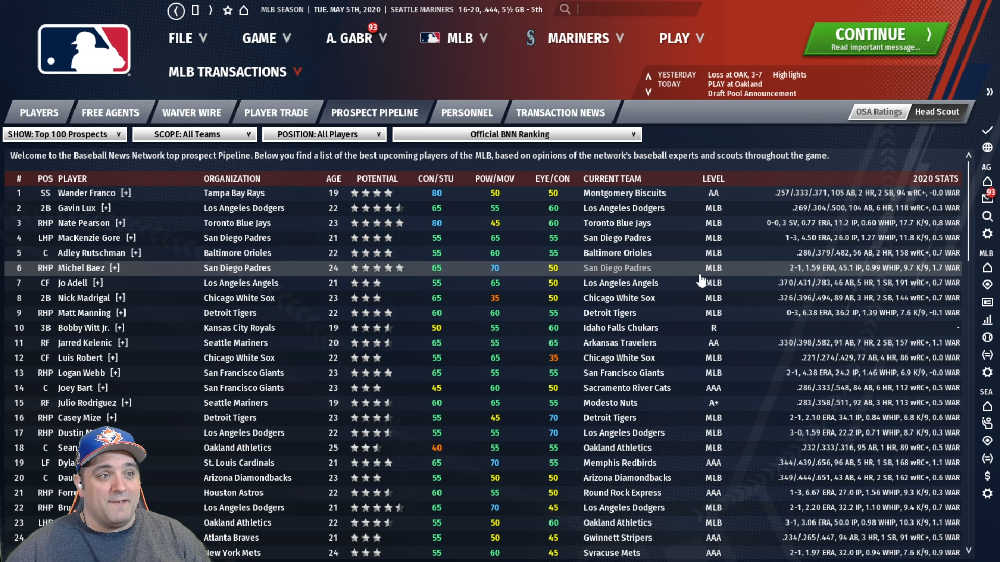 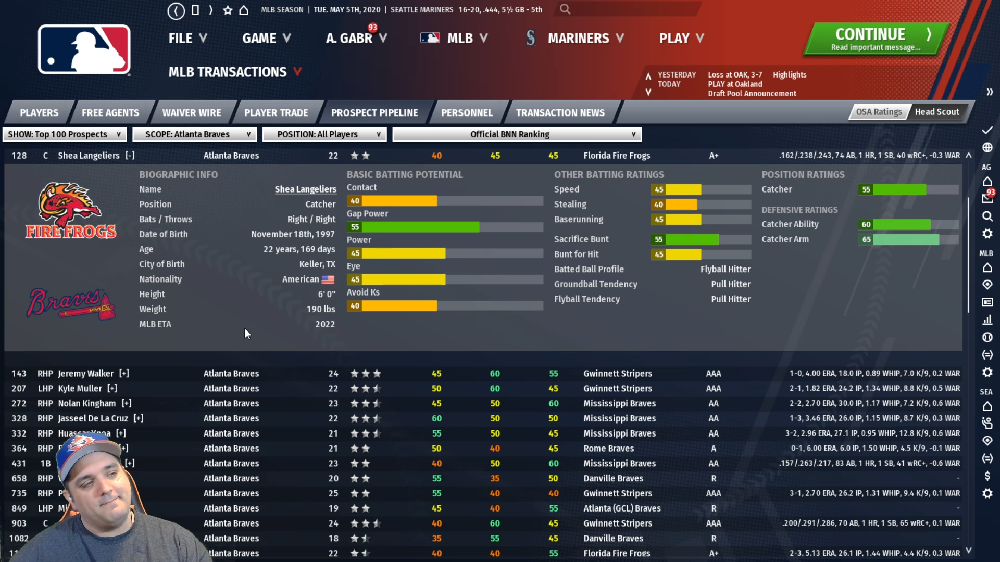 I didn’t bother watching this, but basically more options and control over the league expansion event.

I don’t buy this every year, and when I do I usually wait for a sale, but I’m tempted to get this now and sim current rosters and schedule daily, starting on what would have been opening day. Like an alternate reality MLB in which there is no coronavirus.

It has even more appeal this year as there is no actual baseball to watch.

You could set all the stadium capacities to zero to simulate games behind closed doors. :)

Anyone grab this? It released today.

I’ve been playing the open beta for preordering the past few days. I have not encountered any major bugs or problems so far. I just downloaded the release version so haven’t played the official 1.0 version, but I assume there are no game-breaking bugs in it. Otherwise, it’s still OOTP.

There are two new features that I really love. Both are rather niche, but then this is OOTP so that comes with the territory. The first is related to feeder leagues. You can assign each team a region and then all the auto-generated players for that team will be from that region. Formerly, you could only do this with the league itself. This is great for verisimilitude purposes, especially if you view high school feeder leagues as being all-star leagues (which is the only way they make sense unless you want your PC to deal with thousands of high school teams in dozens of leagues). For example, I can have a New England high school team whose players are only from New England and a Texas one with only players from Texas, and then have them play in a consolidated league with teams from other states and/or regions. Sort of like the Little League World Series, but with high schoolers. You can do this with teams at any level.

The second is that if you have a league with teams from different countries in it, when you create the league and select the ‘fill with fictional players option’ for a team, all those players will be from the same nation as the team itself (you can do the region thing here too if you want). Formerly, it would do this based on the league’s default player origin percentage. This was bad if you had a rule in place limiting the number of foreign players on a team, forcing you to repeatedly delete and auto-fill to get the minimum number of local players on a team. Now, that’s no longer a problem. It’s great.

I haven’t messed with the 3D stadium builder yet, but I plan to do so soon.

I am seriously considering this, though it would mostly be for Perfect Team.

I’ve been playing since Tuesday also, but haven’t taken a good look at the new features yet (prospects and scouting of most interest).

I’ve traded away Chris Paddack and my top batting prospect from the Padres and got Casey Mize, so I have a monstrous rotation at triple A (Gore, Patino also) and hopefully they will be in the majors next season.

My typical strategy is based around home run suppression, so as usual the Rockies are my bete noir. I need the antacids every time Arenado comes to bat.

I purchased mostly for Perfect Team, although I’d really like to find a chunk of time to dig into a franchise this year. Been saying that for a long time, though, so we’ll see how that goes.

I ordered directly from the developer because I read the pre-order notice incorrectly. I thought pre-ordering would come with early access to the final game, a la NBA 2K or MLB The Show. However, the early access was a beta version, which means everyone’s Perfect Team was wiped when the final public build came out. Not ideal, but 1) it was my fault anyway, and 2) I assume more of my money went to the developer, so that’s a plus. I do wish that my actual starter team in PT was anywhere near as good as my beta starter team was. I also don’t anticipate getting Walter Johnson from a standard pack this year. That plus the restricted Perfect League promotions likely means I’ll top out in Diamond in '21.

I also don’t anticipate getting Walter Johnson from a standard pack this year.

The wipes are painful for Perfect Team. In OOTP19 in the beta I had pulled Christy Mathewson, who was an awesome pitcher. I’ve never even seen him in the auction house since.

Amusing discussion over on the OOTP forums where some people are hearing the ‘Cotton Candy!’ crowd sound as, ‘God Damn It!’ and would like such cursing removed from the game.*

*In fairness, only one person has actually called for its removal and he may be joking, but you gotta love baseball fans.

I am going to buy this today but I’m still trying to figure out what my 3 PT team themes will be. Last year a couple of my teams were in a league where you have to vouch that your team is FTP (i.e., the only PP you can use are those your team earns) and you can only use historical cards. It was a lot of fun, and having the restriction on spending cash means you’re always looking for deals in the AH (or working to complete missions). I will probably have 2 teams there, one focusing on smallball and one on defense first.

That leaves the 3rd team. For that one, I’ve been toying with making a team where I set the maximum OVR I can use and build with that restriction - and increase it a little each week (to give me something to do!). So for example in week 1 I would only use OVR 59 or lower… week 2 it’d increase to OVR 61 or lower… and so forth. That means in only… 20 weeks I’d be able to use any card. That might not be a FTP team, as I might end up using that team as the one I spend money on. If I go with this theme then I’ll call them The '59 All-Stars in week 1, and then update the “year” each week… so they’d become The '61 All-Stars, then The '63 All Stars, and so forth.

With those 3 teams to work on I’ll have enough to occupy me in my isolation!

I’m not saying someone just started a team in the Entry League but when I looked at my new team’s 1st game, I did happen to notice Cigar City in the league…