The patch did drop. Restart your Steam.

MUCH IMPROVED distribution of resources. I’m now no longer surrounded by a cluster of just one resource and little else. I’ve got 3 Aluminum, 2 Iron, Bunch of Water, and at least two of everything else. Aluminum is not strangling the pace of the game anymore.

Kinda funny how this is an entirely different game when they actually give you the resources that you need.

Last night I had come across a dev post in reply to the resource issue and how they were pretty sure it was a missed coding error in the 1.0 build.

Let’s make some changes in the 1.0 build and not test it. WHAT COULD POSSIBLY GO WRONG?

Okay, this game changes so much with resources. People were saying don’t turtle, but you had no choice before because you didn’t have the resources to, say, build a half-dozen maintenance hubs to cover a sprawling base.

Your base shouldn’t be a dense megapolis. It should have some central cores, but it should constantly be reaching out in all directions, like tendrils. Build a ton of worker nodes. In my first games, I limited my worker nodes to about 10 because, again, you simply didn’t have the resources to build the nodes, then build the workers, then replace the workers. And then I ended up wondering why the hell everything was so inefficient. In my current game, I’m over 40+ workers and I’m only operating in two sectors. Hey, the game is fun when it actually works correctly!

Constantly exploit resources and build resource scanners along the way. You’ll build the scanners at your main base at first, but the further they are from the target they are scanning, the longer it takes. I dissembled all my base scanners and build them along my network as I probe into virgin territory. Even on long stretches the network you need small nodes where there are power and maintenance hubs, so that’s a good place to put a scanner.

When you’re tasked with opening up new sectors, put colonies and research stations there. Make sure to build storage facilities there so you don’t have to schlep EVERYTHING from your main base halfway across Mars when you need to build something. You can set minimum levels for materials; the AI will shuttle over materials continually so it’s at the storage facility when you need it. Upgrade your roads linking your main base to your far-flung outposts to make this constant transfer as efficient as possible.

Even with the patch they don’t make Uranium easy to find. I had to probe outwards quite a bit before I find a single vein. (Thankfully, it was 2,000+). They do gate your Uranium levels by making it slow to extract, though.

This is what my current Mars effort looks like. The uranium is the lower left. The scanners detected it and I made a right turn and built a road there immediately. 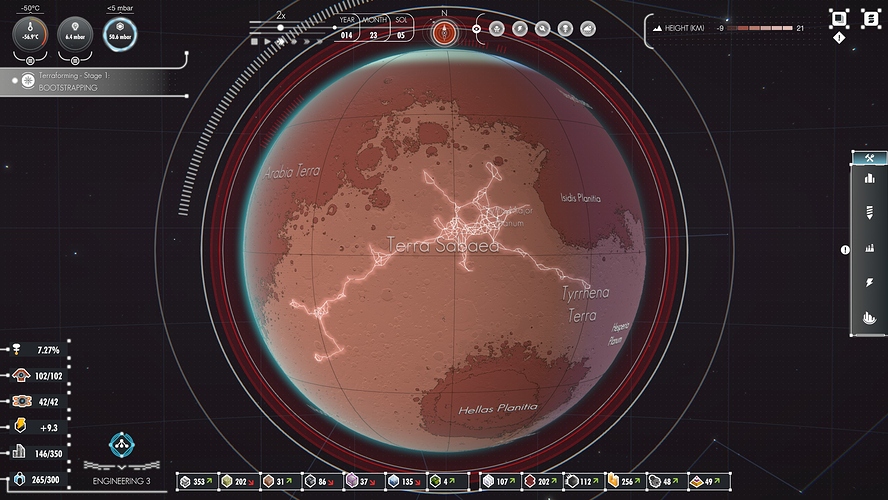 damn, I bought it pretty much as soon as release hit steam and played 8h straight. I am basically in the last stages of endgame. final tech, last piece of research. I am running out of water. I do not want to restart. I mean, I won’t. I will not go through the whole game again.

I’m stuck. I’m supposed to raise Mar’s atmospheric pressure by crashing asteroids into the atmosphere, but the only mission I have for my launchpad is colony migration. Am I supposed to set up a research station on an old base somewhere to unlock the technoogy?

I didn’t get todays patch. Restarting doesn’t help. Is there a version number somewhere? I can’t seem to find one.

Ha ha, you stupidly put all your research into Engineering!

-Tom, who may or may not have done this himself

I luckily saw @Woolen_Horde’s message before I made that mistake :).

Is there a way to change the space port’s mission? I ended up building a second to carry out my other special project. I just had a meteor shower hit, but it only took out 1 worker hub so I was lucky. I didn’t try it yesterday, but it easy mode with the patch resources seem to available. Though not a lot of chemicals or carbon so far.

Anyone know if the combat is just in the campaign, or is it there in the sandbox as well?

I think that if a mission is underway you cannot cancel it. For example, if it’s the migration mission, you have to wait for it to return to Earth. At that time, you can then cancel it by hitting the red x button. But you cannot do that while it’s underway, which is like two years.

It’s annoying because I wish it would notify you that the ship has returned to Earth. If you’re distracted, welcome to another migration cycle.

I was up to 2 in the morning with this one. It’s got its claws in me. But, man, does it have it quirks, too.

Like, why am I always desperately trying to exploit new water deposits when I’m literally creating massive oceans on Mars?!?!?!?!?!?

Speaking of which, I hope you were too tempted by all those rich resource deposits on those flood plains…

Like, why am I always desperately trying to exploit new water deposits when I’m literally creating massive oceans on Mars?!?!?!?!?!?

My original game I ended up in a pretty hosed state. I survived an event which damaged a lot of things, but my maintenance drone count never recovered and fell into disrepair. I have another game going in sandbox mode, and that is going better so far. There seem to be a lot more resources on the normal mode sandbox game I started than the easy campaign game. I was gated by Al for quite a while having 59 structures by the time I found my 2nd deposit. No combat so far, so that seems like maybe it is just part of the campaign. Luckily in the campaign game the deposit that I wanted that was in a flood plain I ended up giving up trying to get to it. That would be a nice shock to have the base wash away.

I seem to be having fun though. About 10 hours yesterday.

They need to put an infinite resources option, or make technology upgrades that extend the lives of mines considerably.

Also, don’t upgrade to level 3 mines. It’s bugged. It costs you a ton to build/upgrade a level 3 mine, but it’s bugged and only extracts as much as a level 2 mine.

About to take our first real hit to the colony. At least it is on the edge. 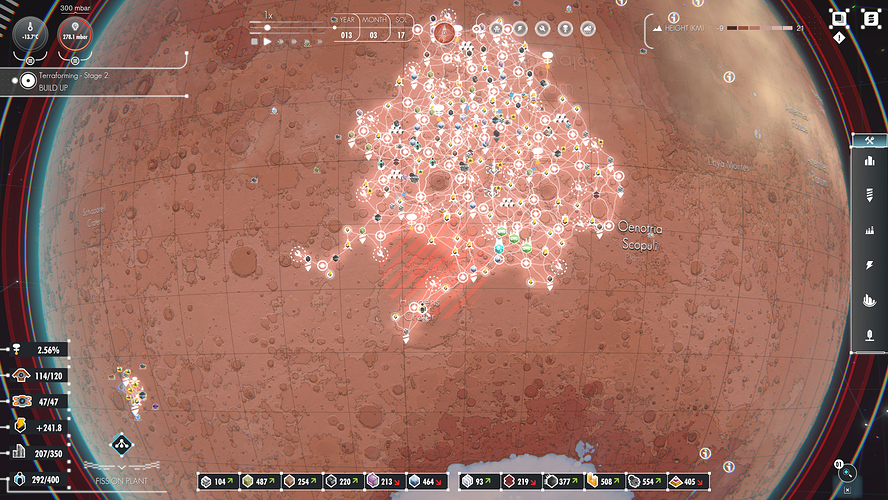 Edit: Not too bad only lost 4 structures. Wish the maint hub would have survived to help out. :) Oh, wow its drones survived. They are circling the rubble.

Do you know if uranium is visible before researching Fission Plant?

Edit: It looks like it becomes visible once you complete the research.