I predict this thread will be really hard to find on Qt3 down the road thanks to its generic show title, but it is what it is. 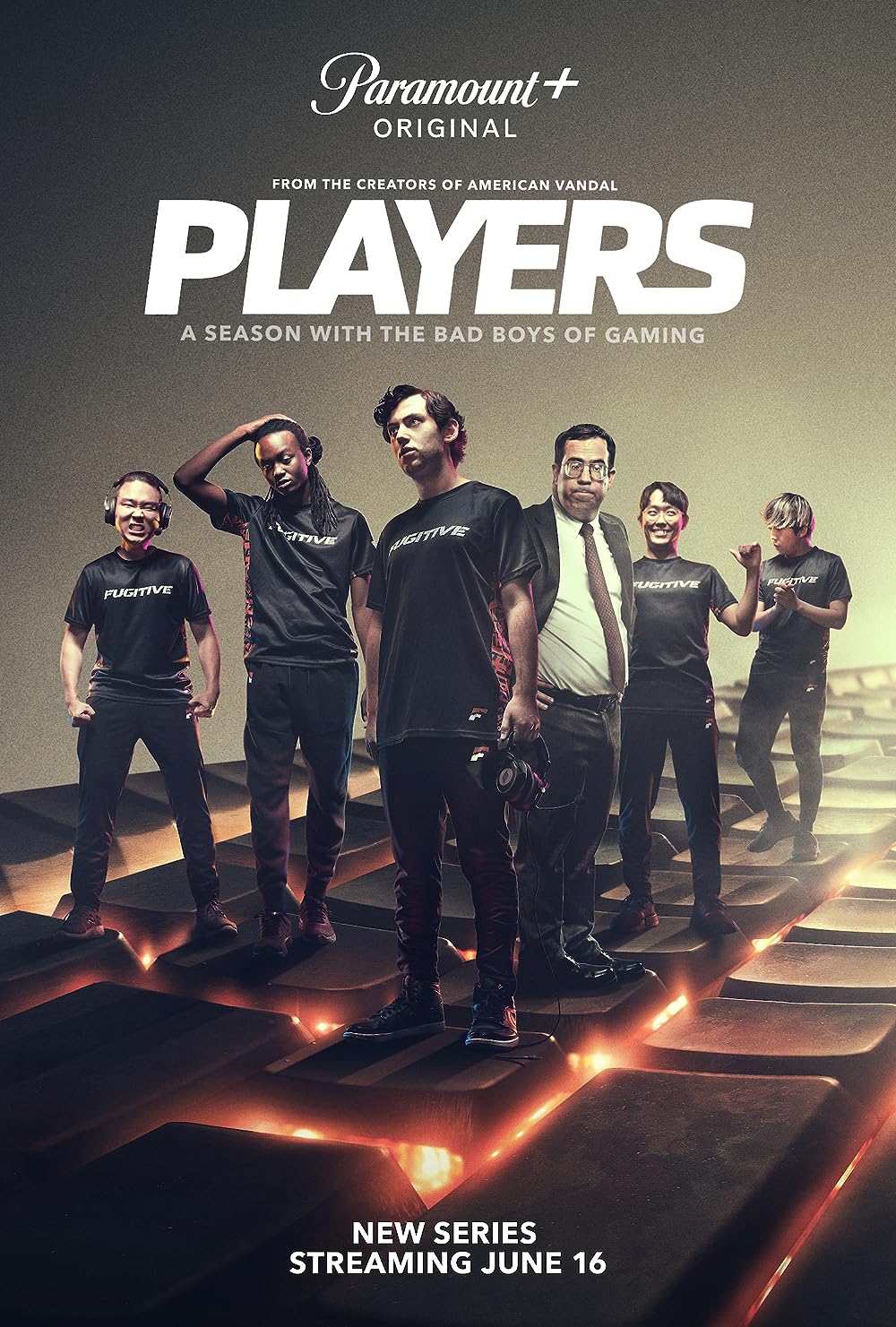 Players: Created by Dan Perrault, Tony Yacenda. With Misha Brooks, Da'Jour Jones, Ely Henry, Holly Chou. Follows a League of Legends team looking to win its first championship after years. In order to make it to the top, their prodigy, a 17-year-old...

The showrunners Dan Perrault and Tony Yacenda also did American Vandal, and their sensibility is front and center here. Goofy subject matter with a semi-serious, and sometimes even poignant, core story. As with their past productions, Perrault and Yacenda show a deft hand at creating a show that if not for some subtle tells and a couple of recognizable actors, could easily be a real documentary in the genre. Here as a riff on Real Sports or The Last Dance as opposed to a Netflix true crime series.

Fugitive Gaming, a longtime fixture of the LoL eSports community, (since 2016 har har) has just recruited “Organizm” a 17-year-old wunderkind, but he doesn’t mesh well with team co-founder “Creamcheese” who’s reached the retirement ready gamer age of 27. Both players want to dominate Fugitive and propel the team to a league win, but their ego conflict and Fugitive’s own rocky history stand in the way.

The only negative I have for it is that the first episode has more than its fair share of “OMG people that play videogames make this much money har har and why are they taking this so seriously har har” type jokes, but I think that’s necessary for the non-gamers that watch. After that first ep, those mostly stop. It’s obvious the writers for the show know competitive LoL and fandom very well.

One of the great things about it is how each episode shows the current situation, then backtracks to 2015 or 2016 to show Fugitive’s formation or some dramatic upset from the past, then returns to the current day so the audience is now armed with this backstory info they didn’t have before. It doesn’t hurt that the stories they’re telling feel pretty real meshed with actual LoL champions and 'caster celebrity appearances.

I’m really enjoying this, and since it’s about gaming and nerdiness and American Vandal was so well-received I thought it should get a thread.

The series is currently on episode 8 with two more to go for the full season.

You were right! I had to search for “Fugitive” since “Players” was just… everywhere, even in the TV topic.

Started watching this with my older kids. I remember American Vandal very fondly, and this has a lot of that energy. But I also feel like it’s more careful to make its main characters, no matter now dopey or self-centered they act, still somehow understandable and sympathetic? Maybe it’s getting to hear about their younger days, so you get to know where they came from.

I don’t know anything about LoL except what I pick up from osmosis (I’ve heard of jungling), and I don’t know any of the streamers and commentators, some of whom are, I assume, real personalities.

I watched this whole thing.

I then watched both seasons of American Vandal.

This team is great. I would say I liked American Vandal more, but I really did enjoy the earnestness and heart that Players had.

It really didn’t feel like a mockumentary as much as Vandal did, it tries to play things much more straight, which I appreciated.

Someone had mentioned that this is the “Last Dance” treatment to American Vandal’s “Making a Murderer” or “Serial” and I think that makes a lot of sense. This is also very well acted, like Vandal.

Yup. This was really good. For the last few episodes, they really eased up on the goofiness and played it fairly straight.

I really liked how Yuumi was used to further the story too.

Plus, I did not expect that ending. Wow!

Definitely a shocker ending. The show really does a great job of making you hate Travis (Cream cheese) for making stupid choices, but as the show goes on, you understand why he acts that way, and how badly his talents were taken advantage of by “friends” around him. You really understand the shield he put up around himself and how cutthroat the sports scene is for a sensitive and emotional guy like him.

I don’t play league at all, but that did not stop me from enjoying the show.

Ely Henry and Holly Chau were so fantastic in this, it all felt very real and natural. Having to be the parents not only of their child, but also their team and friend.

Hell, the entire show is fantastically acted, often to the point where you forget that it is not real.

You really understand the shield he put up around himself and how cutthroat the sports scene is for a sensitive and emotional guy like him.

The only bummer for me was that I wanted a story beat that went back to the broken relationship with his parents and explored that a bit more.

I hope the series gets another season.

There was a weird part of my brain that always wanted to write a novel chronicling the rise and fall of a young totally-not-Starcraft-2 player in a fairly straight-up way after the many years of joy that pro gaming fandom brought me, but it never coalesced. This sounds extremely up my alley. Adding it to a long list of shows I’ll never get to :(