I think these guys might just have what it takes to produce a successful podcast.

Going to be tough to maintain the energy from the start, but I believe you guys.

The three rules of car chases is new to me, but I see from a quick search it’s come up before. Did you guys ever do a 3x3 with car chases? If not, what would they be? Also, per the comment above, I stipulate that Mad Max movies don’t count, except maybe the first one.

Until listening to this, I didn’t realize Emmerich was actually from Germany. I always imagined him as a Lutheran from Iowa or something.

I liked the first Universal Soldier, it wasn’t excellent, a movie experience for the ages, but certainly worth it in the JCVD canon of perfectly acceptable movies to waste some time with.

This one I haven’t watched it yet, gotta check if it’s on Netflix, try and compare to your experience.

Kinda surprised that Tom must not have heard of JVCD’s moniker ‘the muscles from Brussels’!

Very happy to be listening to the podcast again, though I do have a confession: 90% of the time, I haven’t watched the movie.

Which is the correct way to do it! Since you get to enjoy the opsis twice, though the first time through can be somewhat bewildering…

I immediately watched Day of Reckoning after you mentioned it was John Hyams. And then I immediately emailed Kellywand telling him he needed to watch it. And then he mentioned something about what a great -opsis it would be. And so this episode happened and we’re back to hopefully doing these every few weeks.

So we have to thank, Soren. You put just the right fuel into our tanks to get us running again!

I remember the cover of Universal Soldier always catching my eye at the video store because of the eye piece, but I never pulled the trigger on renting it.

I don’t know how I missed the Universal Soldier movies all these years, much less never realized there are six of them. I guess I was busy with graduate school when the original movie came out, and then I was strictly uninterested in Jean-Claude van Damme thereafter? But for whatever reason, they were never on my radar. I would say I didn’t miss much if it weren’t for the two Hyams movies.

Did you guys ever do a 3x3 with car chases? If not, what would they be? Also, per the comment above, I stipulate that Mad Max movies don’t count, except maybe the first one.

Hey, you can’t take Fury Road off the table! I guess if you were to present it as top three car chase sequences.

For me, the best is still Bourne Supremacy. It’s got all three Cs at their best: character, context, and choroegraphy. And it’s the climax of the movie, so that’s like having a fourth C! For my number two, French Connection is still great. And just for giggles and because it’s fresh in my memory, I’ll put Reed Moreno’s brief chase in last year’s Rhythm Section, with Blake Lively fleeing after having assassinated Richard Brake.

Bullitt is lame. I have no idea why people hang on to this idea that the Bullitt chase is somehow great. It’s barely made-for-TV worthy. Ugh.

What about you? What would your top three chases that aren’t Mad Max movies be?

Until listening to this, I didn’t realize Emmerich was actually from Germany. I always imagined him as a Lutheran from Iowa or something.

That’s what you’d think, right? There’s a ton of jingoism in his movies. You’d assume it was homemade!

For laughs, check out the English-language movies he made in Germany before Carolco brought him to the US for Universal Soldier. Making Contact:

Directed by Roland Emmerich. With Joshua Morrell, Eva Kryll, Tammy Shields, Jan Zierold. Believing to be able to communicate with his deceased father, a young boy develops psychic powers where he uses them to try to stop supernatural forces...

Directed by Roland Emmerich. With Jason Lively, Tim McDaniel, Jill Whitlow, Leonard Lansink. In an old Hollywood mansion, the spirit of an old family retainer inhabits an old grandfather clock. When a movie company uses the mansion for a film, the...

Directed by Roland Emmerich. With Jason Lively, Tim McDaniel, Jill Whitlow, Leonard Lansink. In an old Hollywood mansion, the spirit of an old family retainer inhabits an old grandfather clock. When a movie company uses the mansion for a film, the...

I haven’t see any of them, but hoo boy, I can imagine what they must be like. The synopsis from Moon 44:

An unconventional corporate agent is given the task of shaping a group of violent criminals and technical wizards into a helicopter defense force assigned to protect a mining station on a remote moon.

I’d have to think for a while to do a proper one, but off the top of my head

Hon ments for being most fun/silly:

When it’s Kellywand, Arnold belongs in every movie. I can’t wait for another showdown with Kostner.

Bullitt is lame. I have no idea why people hang on to this idea that the Bullitt chase is somehow great. It’s barely made-for-TV worthy. Ugh.

I know, right? Our film studies professor showed it in class, and I thought "well that crash scene was kind of interesting, I should watch the whole movie to see the chase scene too. And then I rented and watched the whole movie, and it turns out what I thought of as “the crash scene” was the whole chase sequence. It just wasn’t very long, and the car crashed before a more full chase could develop.

I’m so delighted that you took my blatant bait in the 20:20 thread, and that the outcome exceeded my wildest expectations. And that you both liked it!

It’s such a wild, weird movie - the first time I saw it I had such a massive WTF reaction I immediately rewatched it. Eventually, I came to the conclusion it was kind of great.

And if anyone is going to watch it, I’d recommend the NC-17 rated Director’s Cut if you can find it - it’s not a massive difference, but it pushes the violence and gore a little further, and I think that matters to what they were going for.

And I’m with Kelly in that I miss that violent era of mainstream blockbuster filmmaking - and it’s not just because I love cinematic violence - it’s that you could have movies with a decent budget that didn’t have to try and be four-quadrant-everything-to-everyone blockbusters and not have them be weird outliers like John Wick. You couldn’t make something like The Fugitive today with the kind of budget it got either. (Well, you can’t make anything today, but you what I mean.)

That Day of Reckoning got to be as weird as it did, got a miniscule cinema release and a whopping 8 million budget was because Regeneration was a pretty big hit in the DTV/DVD market. And that market seems to have collapsed now as well. sigh

By Drive, do you mean the opining kind of anti-car chase? because, yeah, that is such a great, taut scene.

I’m going to give a shout out to The Raid 2, because what’s better than getting some hand-to-hand combat into your car chase.

Also, because the behind the scenes story of dressing up the camera operator as a car seat tickles me pink.

By Drive, do you mean the opining kind of anti-car chase?

That is a good scene, but it does prompt me to ask a question that’s actually been on my mind for awhile: Has there ever been a movie where a motorbike chases a car, actively engages in some form of combat and, y’know, wins? Or at least doesn’t end up with the rider dying horribly.

You know what always bums me out? Everyone goes on and on about the cars and the car chases of Bullitt, but nobody ever talks about the highly dramatic telecopier scene from that movie. Just watch this and tell me you aren’t on the edge of your seat. 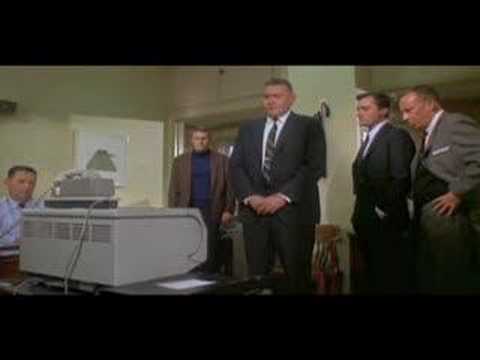