After defying Lord Vader aboard the original Death Star, Admiral Motti became a symbol of the Empire’s over-confidence. But the actor Richard LeParmentier has become a favourite amongst fans… and now, has sadly passed away.

Richard LeParmentier, who will be remembered for his role in ‘A New Hope’, was an accomplished actor who appeared in a number of classic films - performing alongside James Caan in the '70s classic, ‘Rollerball’ and appearing as Lt. Santino in the animated classic, ‘Who Framed Roger Rabbit’.

In fact, in his long career, Richard delivered a number of iconic lines… including the classic “Now that’s what I call one seriously disturbed toon.” But he will always be remembered for his over-confidence in the Empire. And perhaps his lack of faith (which Lord Vader found disturbing)…

This station is now the ultimate power in the universe!

I think it’s safe to say that everyone remembers that iconic scene - The one where Admiral Motti foolishly stands-up to Darth Vader… only to be force-choked for his trouble. It was a brilliantly understated piece of cinema that showcased the true power of the Dark Side while highlighting the Empire’s main weakness - over-confidence.

And it was Richard who took that role and made it his own. Admiral Motti may have only had a small part to play, but it was a crucial one… his cockiness and oversight being the ultimate flaw that the Rebel Alliance needed for their strike on the Death Star.

I find your lack of faith disturbing…

Of course, it was Motti’s single act of defiance that created one of the most memorable scenes from ‘A New Hope’ - the famous Vader force-choke. It’s a scene that’s stayed with us some thirty years after the film’s original release… and has even spawned an online craze known as ‘Vadering’.

The Coventry Telegraph reports that Richard recounted that “I did the choking effect by flexing muscles in my neck. It set off a chain of events, that choking.” And it was Richard’s original scene that showed us exactly what the Force was capable of… especially in the hands of the Dark Side.

Born in Pittsburgh, USA but settling down in bath, Somerset, Richard LeParmentier was a regular at ‘Star Wars’ conventions and will be sorely missed by friends and fans alike. Our thoughts are with his family at this time. 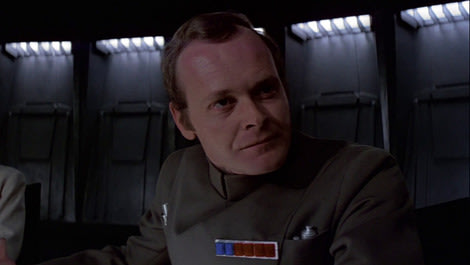