I’ve not put much time into it but I’ve completely adored the time I have had with it. Very fun.

It can be brutally hard. Don’t expect to live very long in the beginning ;) Fun though. Great for short bursts here and there.

It is absolutely worth 40% off. I think I got it on sale for something like 40% off around Christmas, and it was by far my favorite purchase of the sale period. I found it to be one of those games that is fairly easy to learn, but difficult to master. 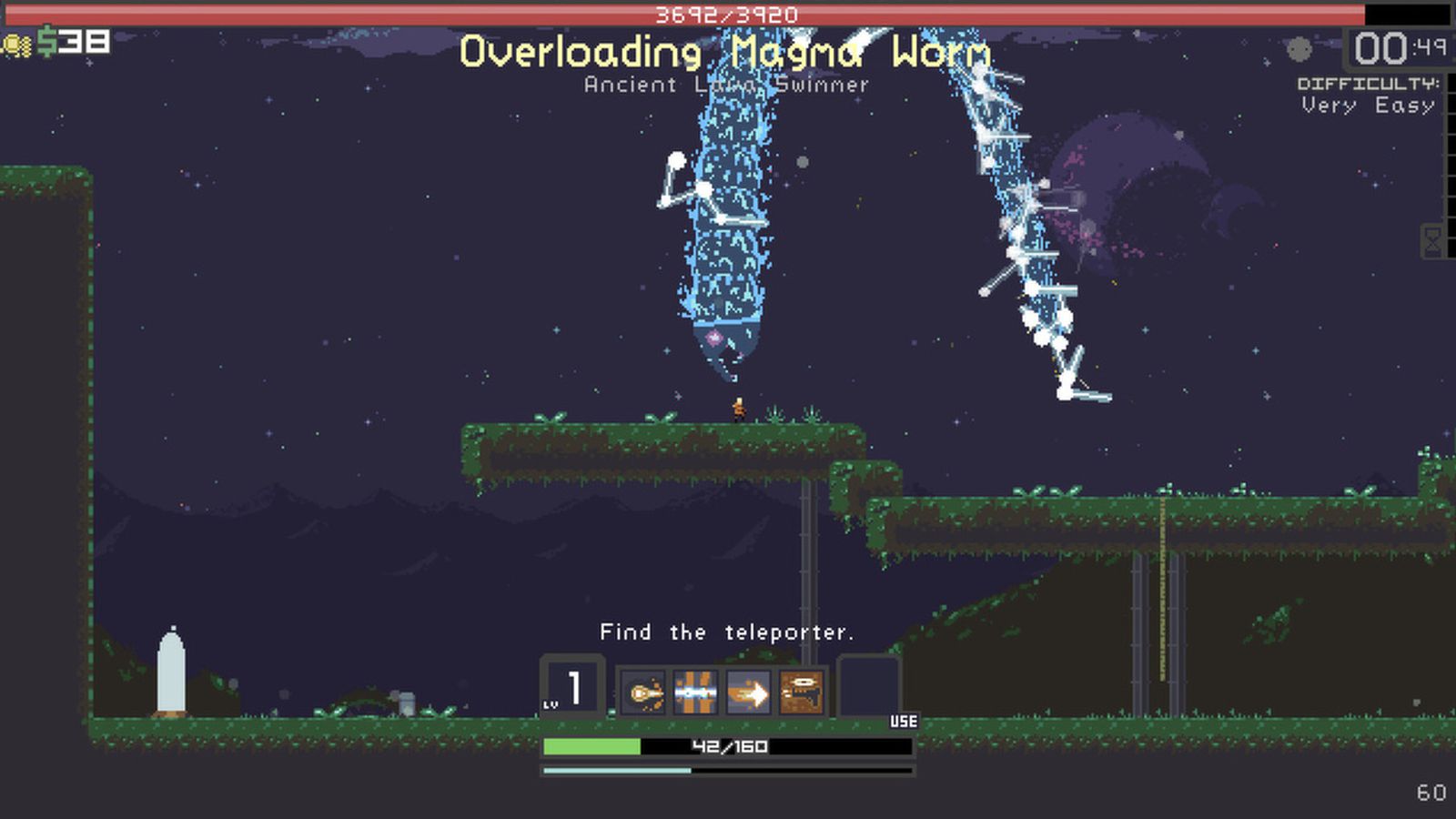 Risk of Rain is headed to PlayStation Vita

I like the Red Letter Media guys and here is their take on Risk of Rain:

Grabbed this game yesterday and proceeded to play it for around four hours coop with a friend, using Discord for voice chat (pretty sweet UI they have).

We played for 100 minutes on a level before we fought the end boss. Seems like “HAHAHAHA!” is the hardest difficulty we can get.

Surprised we didn’t unlock more in that game, but I guess we’ll just have to play it longer, and harder :-) 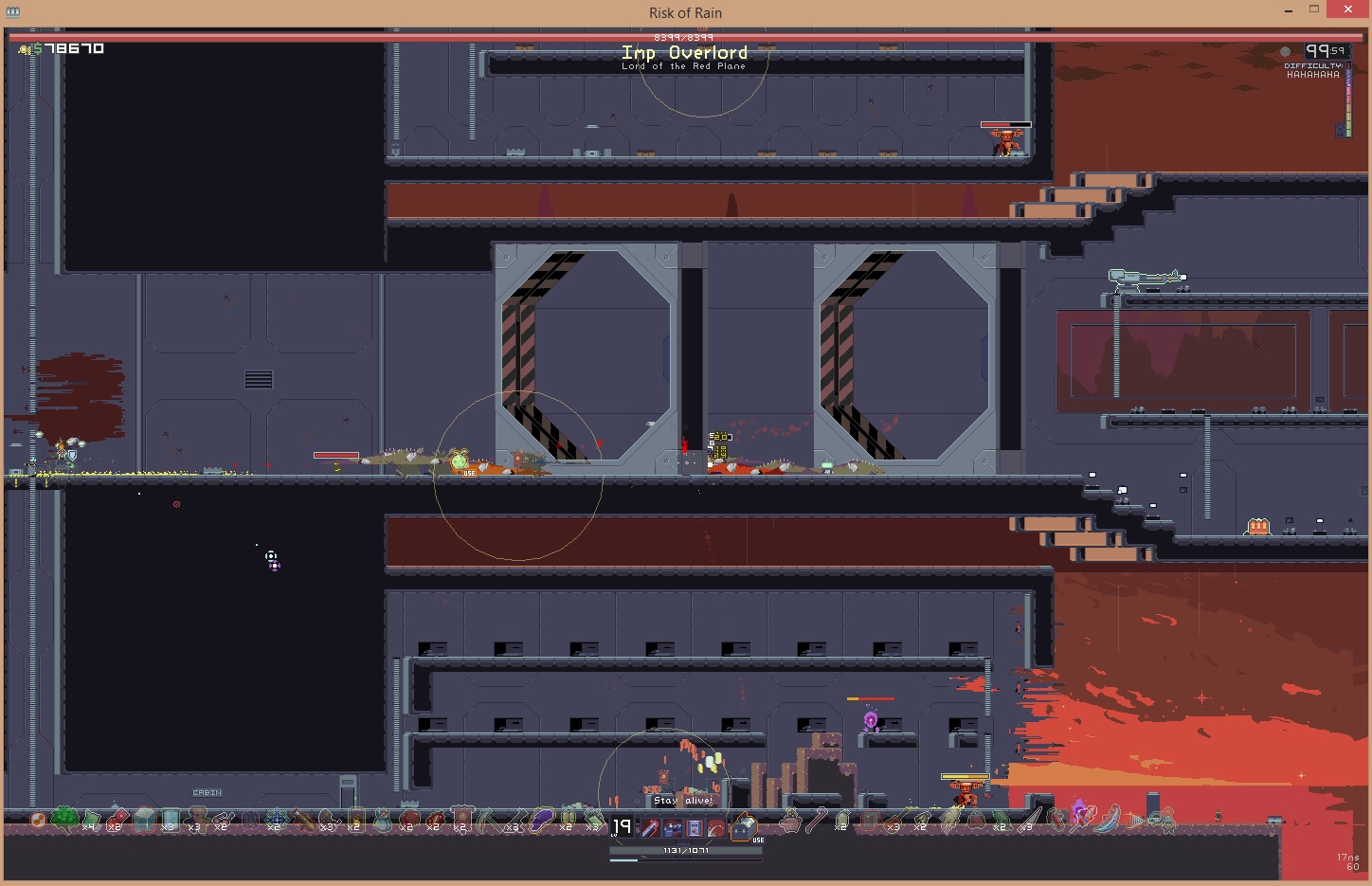 It is pretty cheap on Steam right now, so you should grab it.

Wish the maps had randomization though, and that there were more of them, etc.

But for just grinding unlocks and having a blast trying to survive, it is sweet.

It kinda gets easier past “INSANE” diffculty, if you’ve been lucky with your unlocks and have the right classes.

I feel like I’ve played this a LOT (alone, and maybe not very well) and I’ve never unlocked any characters. Really put me off the game. Why did they make it so hard?

Some of the characters are really terrible, and some of them are quite easy to play with.

The first few times we played we wiped pretty early, then we proceeded to rush to the exit on each level to get to the end. Once we finished that round we unlocked two more characters, and when playing them the game became MUCH easier.

I had a shotgun/shield type of character, with the third ability gives me the option to block ANYTHING that attacked me from the direction I was facing, so I tended to stand on edges of platforms etc and just shot stuff in the face until I got a reward.

As there is some randomness to the rewards I suppose the game can be a lot harder if you have a unlucky streak.

Tips is to get a drone as soon as you can, I guess.

There are a couple characters that are tricky to unlock, but most are pretty straight forward. To have not unlocked any by accident seems a bit odd. Some are quite easy to unlock once you know how. I would suggest looking at a guide.

I still haven’t unlocked the newer additions though.

I’ve sunk loads of time into Risk of Rain co-op and it is indeed a blast. The maps are randomised, order-wise and layout-wise, though they’re built from static ‘chunks’ so you will see a lot of similar bits unfortunately.

I’ve unlocked most of the characters and pick-ups at this stage and got a few of the special artefacts that change aspects of the game (my favourite is one that allows you to pick by tier what items you get on drops – gives the game a lot more strategy), and to be honest, I think I’m about done with it.

We found most of the characters useful, depending on your playstyle and knowing which items to pick up to complement their abilities (in coop of course). The Sniper is by far the hardest one to master from my experience but can be fun when dealing with high level mobs and bosses, especially with crit buff items. Love the Enforcer riot shield guy.

You shouldn’t need to look at any guides for the unlocks as I’m pretty sure it tells you what you need to do in the game under… Logs? It’s from the main menu and lists objectives that correspond to each character.

Oh and yeah, Discord is pretty slick. Not used it much yet but it looks like a really good and simple alternative to things like Mumble, TS and Ventrilo.

I don’t grok this game at all. The enemies are all berserk bumrushers that teleport in behind you, and then everything turns into a giant blob of pixels. I can see that melee skills would help, but the default guy is so frustrating and repetitive, I’ll never reach any of the unlocks.

The enemies are all berserk bumrushers that teleport in behind you, and then everything turns into a giant blob of pixels.

Absolutely. You’re never safe and you’ve got to keep moving. Risk of Rain is at its most exciting when you’re just hanging right on the edge of the power curve, trying your damnedest to survive amidst all the chaos, because once you manage to get over it the game gets a lot easier and somewhat dull for it. It’s at that point the game becomes an awesome mess of sprites and effects as your arsenal snowballs in tandem with the swell of enemies on screen. Amusing at first but after awhile I found myself sort of zoning out which is usually when I want to finish!

I hate to rain on anyone’s parade (comedy!), but I’m with Nezz and others. This game suuuucks.

The screen is 90% wasted space, with the remaining 10% filled with some of the ugliest pixel art out there, almost Atari-level. Finding your way through the levels is a chore. Too many damned enemies that take too long to kill. It’s just all so unsatisfying.

I wish there had been more randomization to the maps myself. But it wasn’t the end of the world. It’s a really fun game, I got a lot out of hit.

This is weird. The studio is working on Risk of Rain 2. It’s not going to be a side-scroller. It’s going to be a 3rd person shooter.

I’m into this. It already looks like the old gameplay translated well to this new style.

Excellent. I really liked Risk of Rain. Hopefully this will be good.