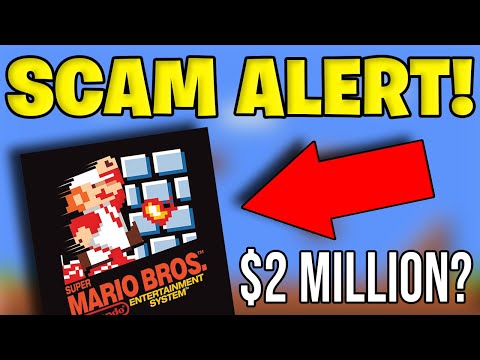 Apologies if this was posted already, I searched and couldn’t find it.

This is super super shady and infuriating.

That’s almost an hour long. Is there a tl;dw for it?

I initially posted the original video source since I didn’t want to post a Kotaku link that might anger some people but they sum up thusly:

TLDW/TLDR: The people behind the grading and auction companies (also behind the collectible coin craze of 30-40 years ago) are pumping and dumping the inflated price of collectible games (the recent news of all those cartridges selling over $1 million) by buying and flipping it themselves after grading it and skimming off grading fees in between flipping

The $2 Million Mario Bros. Auction May Have Been Rigged | Digital Trends

Investigator Karl Jobst has been looking into the recent high-price retro game sales and found that everything may not be as it seems.

Disclaimer: Jobst is a videogame speedrunner and sometime friend of alt-righters

Thanks. I think the dumbest stuff in the story are the sites that allow “investors” to buy “equity shares” in rare video games. WTF.

No now videogames really are art?

Disclaimer: I didn’t watch or read any of that casual protonazi crap, and my life doesn’t revolve around money or being jealous of other’s money.

No now videogames really are art?

Because they can be tax-free investment havens for the rich?

I thought that was the point of selling a 2M copy of some piece of plastic that other rich people would agree about being worth that many silly amount? I guess I saw too much, those sites and video claim they are just scams? Amateurs.

I don’t know where I stand on the “sullying the purity of collecting for collecting’s sake” argument but what the grading houses’ people are doing is illegal.

Video game collecting has been going on as long as the hobby has existed, and VGA (Video Game Authority - a grading company) has been around since 2008, but the doc is careful to point out that VGA wasn’t partaking in market manipulation.

In 2018, WATA Games was founded (another grading house) and they and Heritage Auctions are apparently colluding to drive up video game prices for their own profit.

I’m just in the middle of watching it now, but the makers of this video seems to have done a fair amount of research, and it is well put together, and draws a big distinction between collecting for the love of it (which I can sympathize with) and acquiring games strictly for profit.

I urged people to watch it (if they have the time) since I felt the investigative effort was well worth it.

I sometimes will watch a Lets Play of an old PC game and then want to play it myself, and a lot of older games aren’t available on legit sites like GOG. And as I do still have my old machines in functioning order, I’ll try and track down a complete used copy, mostly for the game itself, but also partly because I like the box art, and I do enjoy going through the manual or other feelies the box may contain.

I used to buy these games fairly frequently on eBay because most games I was after weren’t rare, and in most cases I could pick up a shrink-wrapped copy of an old game for $10 to $30.

The last few years, this practice has been getting much more difficult and expensive, and I’ve just about given up on it with the exception of Adventure games, most of which can be bought at reasonable used prices, provided you don’t need a shrink-wrapped new copy.

Things have gotten a bit crazy lately, even in the PC collectors segment, games of which were always, up until recently, not considered to be very collectible due partly I suppose to their non-standardized box shapes and sizes. So before, if I wanted to play some obscure PC game, and even if I wanted an unopened copy, I could jump online and find one with not much effort or expense.

Now though, I am thankful for instance, that I already own boxed copies of every single-player game I want to play by iD Software. I’m old enough that I bought them new, either from mail-order, or at a store. Acquiring that same (complete in box in nice condition) collection now would cost me a small fortune, even opened and used. For example, here’s a current Wolfenstein 3D sale on eBay, and the seller wants $600.00. And it’s used. 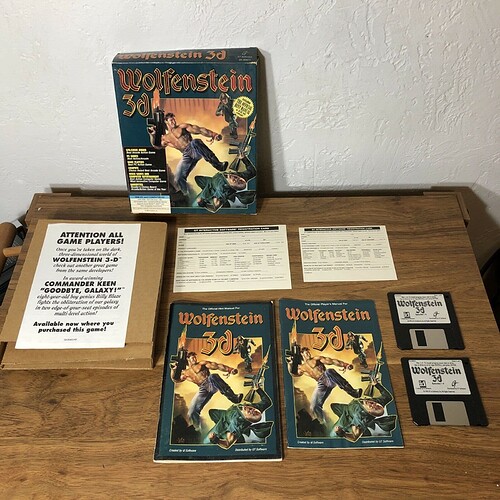 He may not get that price of course, but that price is not unusual. Checking the ones that actually sold, this one sold for $627.30, and there are many others. 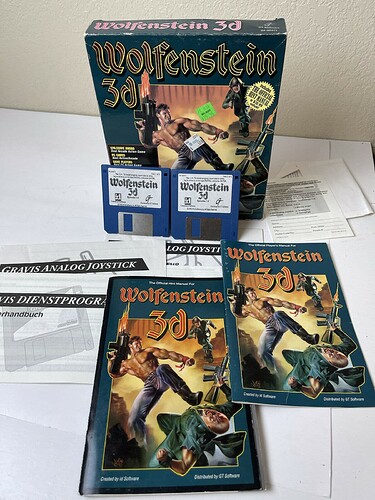 I don’t know if these inflated prices for PC games has anything to do with what that documentary is discussing, but I can’t help but think that prices for old PC games are going up at least in part because prices for old console games are skyrocketing.

I feel bad for younger folks who want to get into the hobby of game collecting, because if you want good games that will also look nice on your shelf, you likely won’t be able to afford it until this ridiculous bubble bursts. And even after that, chances are that the prices will still be unnaturally high just because the seller thinks his game is rare. I mean, there are rare games, but I don’t think Wolfenstein 3D is one of them.

Dang, I had so many intact boxes when I left home, I loved how unique they all were. How would the floppies hold up, anyhow? Would they have been demagnetized or whatever over time, or was that fear overblown?

Floppies do go bad, and are difficult to read on modern hardware even if they’re in good condition.

if mold or dust is an issue, there are ways to clean them, but it’s a bother.

Oh man, here’s some more madness. I may need to start emptying my shelves of all my old big box classics so I can put my kids through college.

One Owner! Only played on Sundays when I was supposed to be at church!

As for the OP article, that is some seriously shady collusion going on. I get the allure of wanting to own a very rare sealed video game cartridge that was a part of video game history, but anyone that looks at something like that and sees that it went from selling for $60,000 a year ago to $100,000 a few months ago and is now on action for $1,000,000+ has to realize there is a scam involved. Nothing inflates in value that high that fast no matter how rare it might be.

How would the floppies hold up, anyhow?

The floppies themselves are the least valuable items. Those can be replaced rather cheaply by looking for auctions listing “floppies only”. The most valuable part of a game is the damn box, since after all these years, it’s very difficult to find a box in mint condition. Hell, look at the pictures in the auctions I linked to up there. Those boxes are not in very good condition, and people are still paying $600+ for frickin’ Wolfenstein 3D, one of the least-rare games of its era.

I mean, back when I was collecting this kind of stuff (because I loved it), I never in a million years thought these games would be worth anything.

Thus, I’ve got more than one sealed copy of Wolfenstein in a box in a closet somewhere.

I mention that because lots of people bought Wolfenstein. Lots of folks like me bought multiple copies when they went on clearance because they loved the game and wanted display copies. Therefore, my reasoning says there are still tons of mint condition Wolfenstein 3D’s out there waiting to be discovered.

And this is true for any popular old game. Prices are insane right now because the market hasn’t been flooded yet because the people who bought and still own this stuff are either unaware of what’s happening, or like myself, they just don’t want to sell.

Look at those games that @SlainteMhath posted. None of those games are rare. They may be currently hard to find in mint condition, but I’m betting there are tons of these games waiting to be discovered, and when they do eventually come out of the woodwork, prices must plummet!

And I didn’t even mention “Case Finds” yet. Not sure if that’s the correct term, but what that means is that because games like these were on best seller lists, many, many cases of them were produced and shipped.

Likely, there are still cases of these games sitting forgotten in a warehouse somewhere, even cases of Collector’s Editions!

For example, in the very early 2000’s, I was unemployed for 6 months, so I made a bit of money buying clearanced games and selling them on eBay to people who were having trouble finding those games.

Well, I was also a big fan of Microsoft Space Simulator, and it was currently very hard to find, even on eBay. So, since I had the time, I went trolling on the internet, and found a warehouse that was selling case lots of various different things they were trying to get rid of. They had one sealed case of Microsoft Space Simulator, the CD Rom edition (the hardest version to find anywhere). I can’t remember, but I think it was either 12 or 24 complete, shrinkwrapped copies. I do remember my cost for each sim being $10.

I put them on eBay, one by one on actual auctions, and managed to pay my rent for two whole months just re-selling those. One teacher in Australia was determined to have one, so he bid it up and finally won it at $190. I found out it was going to cost $42 just for shipping to Australia, and he was fine with that. Paid with a money order via snail mail back then.

Anyway, my point is that I think there are other Case Lots out there waiting to be unearthed.

This was a good video. The story in general is … weird. Or maybe it’s not weird.

What I mean is that when games started selling for millions of dollars at auction, everyone was reporting breathlessly about it, despite the fact that it was massive increase in price from the last record breaking game auction. Everything about it looked sketchy, but I guess no one wanted to pay for a reporter to do some digging. Which, yeah, I get how that happens in this “nobody wants to pay for quality journalism” era, but some of the stuff in this video seems obvious enough for a trained reporter to uncover that I doubt it’d require paying for the equivalent of a massive expose backed by months of research.

This also makes me wonder if the rot runs even deeper. I’m pretty sure I read that WATA has asked Frank Cifaldi to occasionally verify the authenticity of prototype carts, and I hope that it’s just a simple, professional arrangement. I’d hate to learn that someone like Cifaldi is involved in anything sketchy, as he’s always been a great advocate for video game history and preservation.

Also, part of me wonders now if my copy of Rule of Rose is actually worth as much as people claim. It’s a reprint, and I have a feeling that would be a mark against it.

As an aside, speaking of Frank Cifaldi (who appears to be up and up) and respected in the retro gaming community, he’s one of those disrespected by Tommy Tallarico in the latter’s efforts to krautfund for his misguided Intellivision Amico revival. The point I’m getting to is I was surprised that he was a longtime SometingAwful Goon, a member of the SA forums. I guess that’s what happens when the lot of us have spent the last 20 years in public view on the Internet.