Saw this on Brian Rubin’s site. It’s a 4x game with, as the name suggests, no FTL travel. It looks like they also plan to model the information delay of lightspeed communication over interstellar distances. Worth a look just for the novel approach. Still in kickstarter. 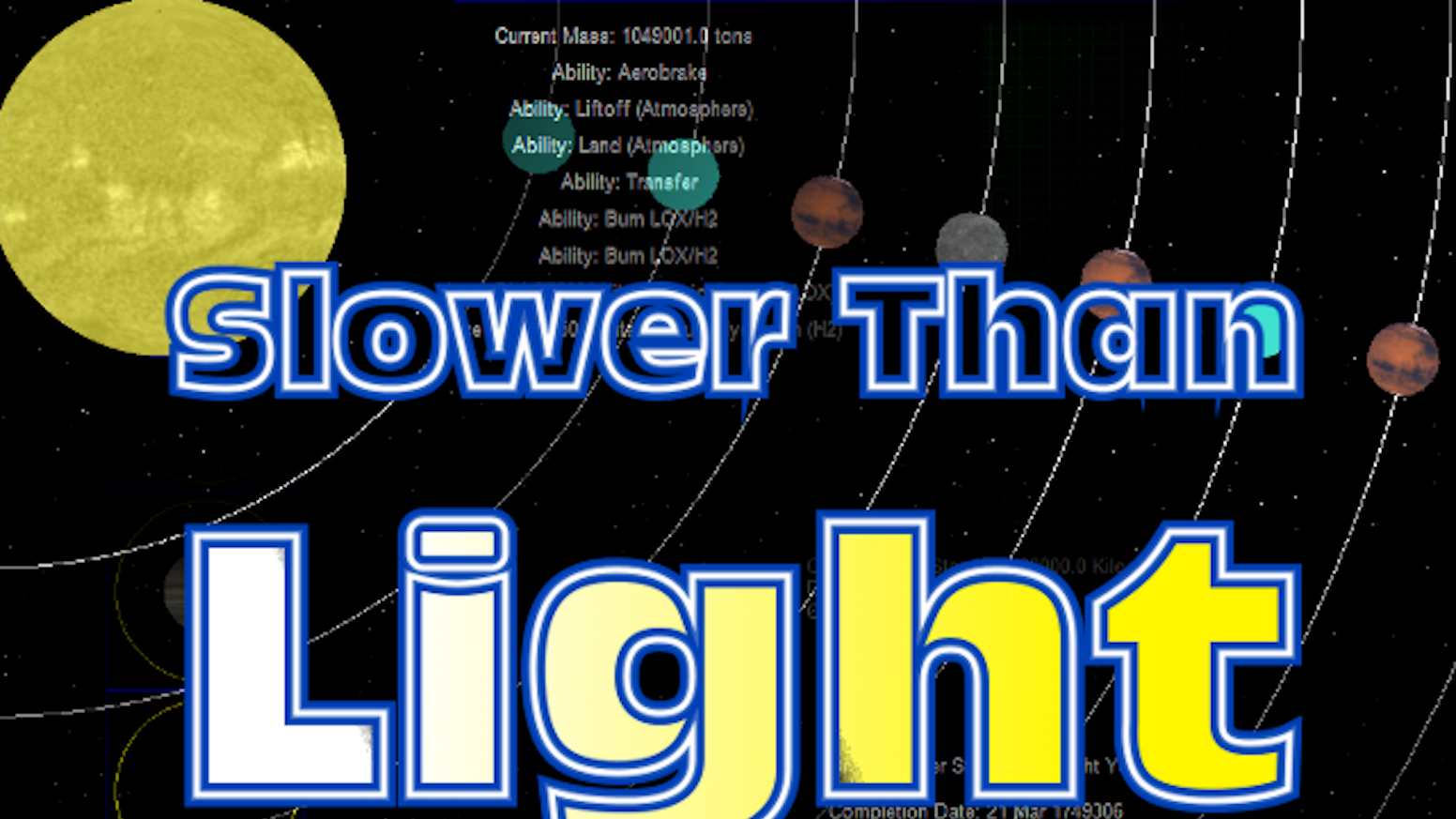 A Hard Sci-Fi 4X game based on the first few millenia of humanity's journey to the stars.

I love the part in the video where they decide to build a comms relay and the order to do so will get to the manufacturing plant in twelve years.

I backed at the Early Beta level because I’m an easy mark.

Hey he’s in Waltham, MA. I lived there for four years, not normally a place you’d associate with game development.

It’s an interesting concept. I’ll probably take a closer look though before I decide whether or not to back it.

Slower Than Light is a game in which the player directs the course of humanity’s future among the stars, from present day until we live on planets for hundreds of light years.

He lost me right there.[/curmudgeon]

That said, I do like idea of embracing the limitations of light speed, rather than explaining it away, like much of Science Fiction.

I think the sentence might mean “spanning hundreds of light-years.”

It is hard to believe he could be creating this game and yet make a mistake like that.

I see this, am glad someone is taking a more hard sci-fi approach to strategy games, and then I wonder why can’t we get someone to port High Frontier into an electronic format.

Backed. Fascinating game idea - I’ve tinkered with some overlapping ideas, but never got this far in my development.

Backed. Fascinating game idea - I’ve tinkered with some overlapping ideas, but never got this far in my development.

I see this, am glad someone is taking a more hard sci-fi approach to strategy games, and then I wonder why can’t we get someone to port High Frontier into an electronic format.

One of the projects I was considering to do after my current project is finished was something along these lines (I was torn between a High Frontier scale or an interstellar scale). Now I’m not so sure I will pursue it if this is coming out.

I will back this, and see how it goes!

The kickstarter says nothing of the people working on this or what experience they have.

Assuming he’s experienced enough to accurately estimate 1,500 work-hours and also being out in 2014: 1,500 for a single person working 9-5 is 43 weeks, approx. He claims he’s working on his in the Risks and Challenges section?

ps, from the questions section:

A lot of people have messaged me to say that I used the word “light-year” incorrectly as a unit of time when I say “[…]from present day until we live on planets for hundreds of light-years.”

I meant this sentence to use the word light-year as a measure of distance, and I still contend that it parses correctly when you interpret it that way. I may pull the line in the next revision of the video, though, because it seems this confusion is costing me backers.

How could it parse correctly? “from present day until we live on planets for hundreds of meters” doesn’t parse.

Hey I know a guy that did the Kessel Run in under twelve parsecs.

Hey he’s in Waltham, MA. I lived there for four years, not normally a place you’d associate with game development.

It’s an interesting concept. I’ll probably take a closer look though before I decide whether or not to back it.

I work in Waltham, MA and while there might not be great game development, there is a large selection of development talent in the area. Also, not too far from Turbine and ex-Irrational down the road as well.

ps, from the questions section:
How could it parse correctly? “from present day until we live on planets for hundreds of meters” doesn’t parse.

I don’t think grammatical constructs should be a burning concern when it comes to a simulation that deals with math and the hard sciences, not the liberal arts…

Yeah, “from present day until we live on planets for hundreds of trillions of miles” would parse correctly (though it’s slightly awkward and would be better with “around” at the end or “on planets spanning” as suggested above) - it’s more that the sentence also parses somewhat correctly if you assume he’s using the term wrong that is confusing people, I think.

“The forest extends for hundreds of miles.”

Makes sense to me.

“The forest extends for hundreds of miles.”

Makes sense to me.

Yeah, but you changed it to a more normal phrasing.

“People live in cities for hundreds of miles.”

What color should we paint the bike shed?

I forgot I asked this guy a question. His answer contains 5 points, and the blog post goes over points 3,4,5 in greater detail, but his answer is below as 1 and 2 might interest you.

Note: The guy seems to be happy spending all day e’ry day working on this. Let’s hope he doesn’t burn out :P

Who are you? Why should I give you money? What software projects have you worked on in the past? how many of them have you managed and did they deliver on time?

All fair questions. Let me take them one at a time:

My name is John Brewer. I’m a 30-year-old software engineer and I’ve now spent over half my life working in the technology sector, from an initial job working for a printing company in Massachusetts to doing work around the globe for major corporations and helping to build one of today’s premiere data firms.

In December 2014, I left my job to pursue my passion, and I spent January and February getting this project from the state it was in to being ready for Kickstarter.

You should give me money because you have seen the descriptions and concepts of Slower Than Light, the project I’m working on, and they have captured your interest.

You should give me money because you believe that space colonization is a worthy goal, and you want to support games that teach about the challenges of interplanetary and interstellar travel as well as entertain.

You should give me money because you’re tired of a stagnant genre of cookie-cutter clones, and you want something that feels wildly different from the releases of the past two years.

You should give me money because you love worldbuilding games, and you want not only to build a far-flung empire, but you want that empire to have mysteries and secrets for you to discover not because they are content programmed in, but that are emergent from the gameplay itself.

If none of these apply to you, perhaps you shouldn’t give me money – I have little else to offer you.

The first software project I worked on was an e-Commerce website in 1999-2000. At the time it was the first printing website that offered on-demand proofs of invitations and business cards available on the Web. It has now evolved into einvite.com, although I suspect none of my code still runs on that site. It delivered on time on June 30, 2000.

The second software project I worked on was for the same company, and it was a CRM system to replace the DOS-based system the company had been using since 1993. For this project I had charge of one of the silos (shipping, specifically), and we delivered our component on-time, although the rest of the project dragged past my eventual departure from that organization in the autumn of 2003.

After that, I wouldn’t spend much time developing until 2007, when I became a sales engineer, and I began specializing in system integration for our customers. During that time, I lead many smaller, mission-specific projects. I’m afraid I can’t discuss specifics of those projects, but I can say they were all tightly time-lined constrained, small-team projects. These projects were generally between seven days and six months, and would require integration with a number of client data systems, complex analysis of the data recovered from those systems, knowledge capture from users, and metric and result reporting to stakeholders. Of the ~25 projects I ran from 2007-2013, only two ran past their delivery dates, and both for very identifiable reasons.

Before seeking funding for this project, I sat down with my design and vision documents, and made my must-have-to-release feature list. I made sure there were no features I didn’t know how to implement at a technical level, and where there were questions, I built test-bench studies to ensure that none of the features required me to solve intractable problems. Once I did that, I assigned an estimated number of hours not only to each feature, but to its integration into the framework as well. I summed up those figures (1,142 hours), multiplied by 1.3 for user interaction and overhead time (1,484.6 hours), and rounded up to 1,500.

1,500 hours is indeed 9.375 160-hour work-months, which would take me from April 15, when this Kickstarter ends, to the end of January 2015, which represents a clean-miss of nearly three months. I have not, however, worked an eight-hour day since 2005, and the fact that I have tremendous passion for this project has only benefited my schedule.

At this stage in my career, I’m averaging 11-12 useful working hours a day. Some more, some less. The project plan gives me 27 weeks from the close of funding to 31 October, which means I need to average 56 hours a week to make my goal. In reality, my average work week is closer to 65 hours, which gives me an additional buffer of a bit over 250 hours beyond my already existing safety margins.

As you can see, I’m actually being quite conservative with my math; assuming I don’t write another line of code before the Kickstarter finishes, my safely margin on development is 613 hours, or around 40% of the total project time estimate.

I hope this adequately answers your questions. Thank you for reaching out to me, and let me know if I can tell you anything else.

It’s a pity, I feel projects such as these are exactly what Kickstarters should be there for, but nowadays they drown in a sea of unremarkable projects.

However, when you’re little, at some point your mother should have taught you to comb your hair and put on some decent clothes before leaving the house, and in game terms this means, make sure you have something visual to show that doesn’t make it too obvious a math geek with no consideration towards these things is running the show.
It’s totally ok to be such geek, but I think it’ll always pay off to spend a pittance on somebody at DeviantArt or whatever to draw something presentable for you.
The slower than light videos almost look like Stars!..