Surprised to see these being offered for $30, seems high. I guess if Stadia’s controllers are XInput they’re still useful. 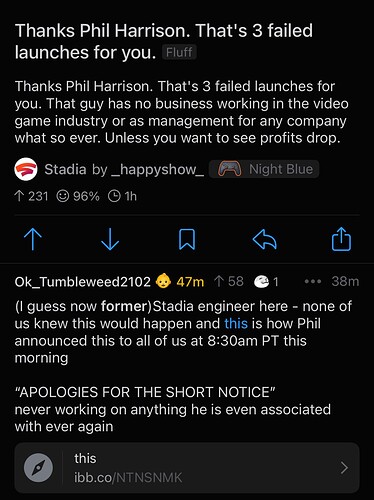 Phil handled the big first Stadia layoffs like a sociopath too

I wonder if this means my never opened, still in the box Stadia is now a collectible?

For something to be collectible, someone has to want it.

Yeah, it’ll probably be as collectable as a Nokia N-Gage. A few completionists will want them for their collections, but otherwise not so much.

Well, you can actually play on those N-Gages though. With Stadia shutdown, no one will be able to play anything.

Yeah, it’ll probably be as collectable as a Nokia N-Gage.

You can still play games on an N-Gage.

I would say this will be about as collectible as a Nokia phone from the same period.

Not a lot of Schadenfreude to be had - just sad about the waste of resources and engineering talent while Phil Harrison got to enjoy another nicely paying gig that he ended up mismanaging.

I don’t know who’s to blame behind the scenes; Stadia failed due to its business model and lack of investment, but were those Harrison’s call? Nobody knows.

It’s our fault. We failed Stadia.

Most Google services that don’t serve billions are doomed sooner or later. The remarkable thing is how long this one lasted. Must have been a useful tech demonstrator.

I was hoping they would turn it around, it wasnt bad anymore. They just finished a UI redesign too, why bother.

QT3 thread is the fifth result for Stadia tattoo on google

Well that leak was wrong - it’s not being shut down until January next year!

Example #217 as to why you should never base any business venture on Google technology.

I’ve tried every other major streaming service, even Amazon Luna, but I never tried Stadia even after getting a free three month trial of Pro. I’ll never trust google to keep a service running after Google Reader.

Exactly. Google killed any faith in their non-search, non Gmail and not YouTube products when they turned off Reader. At least amongst the geek intelligencia who loved Reader and who would have been the prime evangelists for a product like Stadia. Instead you get a thread like this one, with people wondering from the get-go when Google would pull the plug.

I think shutting down Reader may well turn out to be one of the most expensive mistakes Google ever makes. It was a pittance to run (for a company Google’s size), and to recover that small cost they sacrificed a massive amount of their reputation amongst (shudder) tech influencers.

That’s my theory, at least.

What AC game was given away for free? Was that Origins? I forget, but I know I got a free AC game eventually on Steam. Thanks Stadia!

Odyssey, I got that freebie too. That was from Google testing out the tech before stadia.