I guess Strafe got a mention in the Kickstarter thread, but it seems to have enough buzz to warrant its own topic.

Oh yeah, I totally kickstarted this bad boy. Can’t wait for its release.

This is looking really good.

Why everything has to be a roguelike now??

What does “roguelike” even mean these days? It used to have a pretty specific definition, but it’s been watered down to the point that anything that’s “hard” and has procedurally generated gameplay areas seems to qualify.

What does “roguelike” even mean these days? It used to have a pretty specific definition, but it’s been watered down to the point that anything that’s “hard” and has procedurally generated gameplay areas seems to qualify.

Procedurally generated maps for a supposedly ‘old school’ FPS is… less than ideal. Map design matters, and it mattered even more in that category of FPS,where you don’t have a story as the carrot to advance.

Procedurally generated maps for a supposedly ‘old school’ FPS is… less than ideal. Map design matters, and it mattered even more in that category of FPS,where you don’t have a story as the carrot to advance.

I agree. Too often “roguelike” is used as a development crutch for things being unbalanced or lacking narrative. If a level completely screws a player with enemy placement and bad power-ups or weapons, the developer can just point to the roguelike label and shrug. “Deal with it” is the quick and dirty response.

Which, of course, goes back to the original question “Why everything has to be a roguelike now?” The answer is that for many developers it’s just flat-out easier to produce because they don’t have to worry about narrative or balance. Plug in some variables into your algorithm and off you go!

I think the other reason it’s popular is you want that emergent gameplay effect for streaming and YouTube views so people can play your game for a thousand hours.

I pretty much ignore all this stuff so it doesn’t bother me.

Oh, no. Eurogamer’s review says Strafe drops the ball on one big part of the game: The guns suck.

A gleefully gory throwback to 90s shooters wrapped in a rogue-like shell, Strafe is let down by uneven pacing and underwhelming guns. 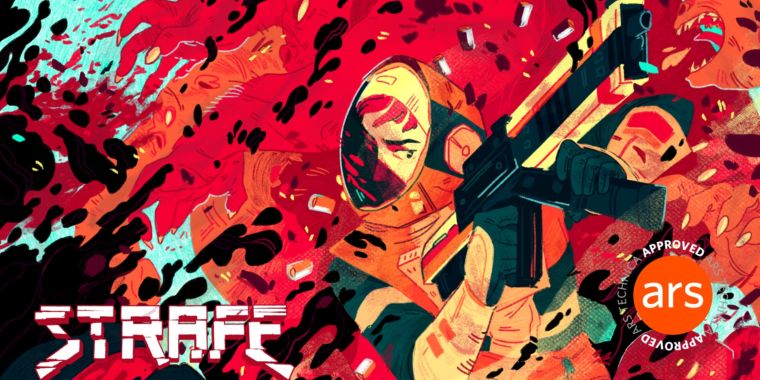 It’s so hard that we still haven’t come close to beating it. Don’t care.

If there’s one thing the Best Video Game Gun thread taught me (aside from @Scott_Lufkin and @TimJames being the only ones with the correct answer) is that ‘gun feel’ is very subjective. From the Ars review:

“This brutal difficulty is made up for by weapons that feel very powerful between their damage rates and audio-visual punch.”

Edit: Strafe seems like the Teleglitch of first-person shooters.

I was all set to grab this but the general reception doesn’t seem to be very positive. I think I’ll wait until I see some reviews from a site I trust.

I played a bit last night, and underpowered guns are absolutely right. Made the entire experience feel anemic. I don’t expect to have all the baddies go down in one shot, but geez.

I’m a fan of old school shooters and what I just saw (in YT videos) wasn’t good.

-Level design was ok-ish for procedural generation, but it didn’t have variety in textures, lightning conditions, etc, that produced very samey zones which is a problem, it can make you go lost (which was already probable given the maze-like levels).
-Very poor enemy variety. After 90 minutes I barely have seen 5 different enemies, 98% of them time were actually 4 of them. And two of them were super similar so more like 3 enemies lol.
-And they had poor design. 2 of them were super similar as I said, actually, simple melee enemies who would walk in a straight line trying to kill you. In fact 75% of the game seems to be shooting at them. There is no a enemy like that in Doom or Quake, and it’s no coincidence, as minimum melee enemies could charge at you, or jump, or had a secondary fire, or were able to run in zig-zag, and in neither of them the basic enemies were melee-based.
This simple enemy and the abundance of them only means one thing: most of the game is played shooting at them while you press S. zzZzzZzz
Another was a simple immobile turret attached to walls that would fire at you, and another a very visually boring looking enemy, a walking turret with 4 legs that also fire an avoidable projectile. You know when an enemy is uninteresting that it doesn’t even have a face.
-Poor sound design. The 5th enemy I didn’t comment could fire at you but the sound effect was so muted it was almost silent. The player in fact sometimes didn’t seem he was being fired at. Great design!
-Poor (or No) ammo management system. I don’t know exactly how it works but all the people I’ve seen usually used the same weapon. They had thousands of bullets, and no capacity limit? So no incentive to mix it up what weapons to use depending of the ammo found in the nearby area, types of enemies, etc. I just saw someone take a new weapon and he had 75 x5 = 375 shots!

So from what I saw it’s missing totally key features of old school shooters.

I agree with all of that. It felt just so…weak…

Yes this is a massive disappointment.

The whole idea is to have a never ending barrage of classic early 3D era FPS carnage but this is just… totally bleh, wandering around looking for keys, using the same weapon over and over, zero danger playing it totally safe so you don’t lose health.

I got this in the Steam sale. I had a great time with my first run, honestly. I picked the assault rifle as my weapon, and had a lot of fun mowing down enemies for two levels before I died.

I wish I could save between levels and continue from there, instead of having to start over. Gah. I don’t know if I have it in me to keep playing a first person shooter from the beginning every time I die. It just seems like a stupid concept.