Is it true that you get all the original Supe movies for free?

Me thinks not. However, there is a box set out on 12/7 that has all of em except the original from looking at it: 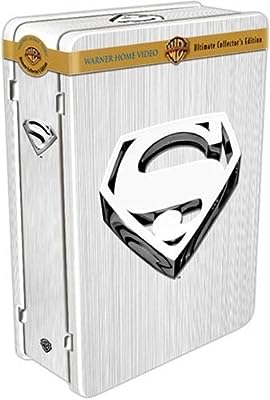 That came out yesterday. I picked it up at Target for 69.99. It has two versions of I, two versions of II, III, IV (one too many versions of those last two, if you ask me), and Returns, plus a couple of documentary discs and an assload of old Fleischer and Warner Bros. cartoons.

I’m guessing that’s with the Zemeckis version of II?

I’m guessing that’s with the Zemeckis version of II?

It has the Donner cut too.

Out of curiousity, what are the main difference between the two cuts of Superman II ?

Mainly Marlon Brando instead of the mother. The ending is different, which is good and bad. It’s better thought out and doesn’t make use of new, crappy powers, but isn’t terribly well executed and makes use of another crappy power.

The movie isn’t as well polished as the first one and it shows, especially in the editing. I am looking forward to Donner’s commentary as to how his vision differed from the final product, as obviously they couldn’t include everything.

It has the Donner cut too.

Oops. Sorry. I got mixed up.

They screwed up the boxset – the Superman III disc is the original non-special edition version (I’m surprised anyone cared enough to notice) and the Superman I disc is missing the original audio mix (it just has the 2001 “remix,” which actually replaced a lot of the sound effects with re-recorded ones). They’re already running an exchange program (800-553-6937) for anyone who already bought this or is thinking of picking it up.

If I have the original boxset (Supe 1-4) and am a big fan of the movies (except 4) but am not a comic book purist, should I get this set? Are the additional cuts of the originals worth it?