Are you talking about like when Vyce and Cautia are in your party early on doing their thing? They can’t die - they just spirtshift out of the battle when they would otherwise or get low on health. Ignore them and focus on the objective.

I’ve been kind of mystified by damage numbers, both very high and very low, and on both offense and defense. So I went looking for info and found this video. It seems to actually be about an earlier version of the game, but I assume the same general idea still holds true. If anyone else is interested: 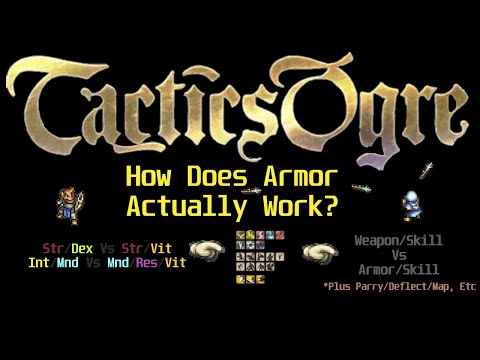 He does make it tougher by going on tangents and tangents within tangents, but I think I have the basics:

Compare base offense stats versus base defense stats to find out the extent to which the attacker overpowers this defender.

It’s a bit foggy as to which stats count how much, and this changes depending upon the particular weapon and whether this is a magical attack.

Scale that damage number according to racial and equipment bonuses, both offensive and defensive. Like some weapon might be rated 5 in piercing damage, or give a bonus against beasts.

The point being, I guess, that good armor can protect a defender, even totally overpowered. But if something were to diminish that armor, then that unit would suddenly be highly vulnerable to damage.

My apologies, if this is explaining stuff everyone else already understood. But I was pretty confused, and now feel that I have the basic idea.

One additional observation about guests and then I’ll let it go.

Why couldn’t they at least give us the same control over the AI for these guys that we do if we let the AI run someone?

At least then I could select the least aggressive posture and not have them storm the castle like a suicidal maniac.

I noticed back in the PSP version that damage is a cliff more than a gentle curve. Once you break the defensive value of a target, you go from dealing like a paltry 75 damage to 250 and more*. At one point my Deneb hit a Kraken for 1,250 damage + 300 damage (from Instill Shadow) and did so twice with Double Attack. It was a thing of beauty, but he was also 5 levels above the target, who was also frightened and breached.

Morale of the story is stack Strengthen and Fortify on your units and dish out Weaken and Breached and Frightened is a generally good strategy. I try to keep items that do that stuff on all my characters.

*In the PSP version the number would be like 20 damage and then you’d want to see more than 100 with a good hit that broke through defense.

I try to keep items that do that stuff on all my characters.

So you’ve got everyone carrying disposables that weaken/breach/frighten enemies? As I progress in the game I clearly need to do more of this and less filling up slots with just health. I do have all the melee guys carrying strength already, and a couple with that resurrection stone thing.

It depends on the battle, sometimes I keep some of those items that delete resting undead, but mostly I try to keep the following slots active like this (so I always know where to look in the 4 slot layout for a given item type).

The dragoon is fun when he can do his beastslayer/dragonslayer + his auto-skill for the appropriate enemy. Damage numbers go through the roof and that’s without extra buffs on him or debuffs on them.

Flip side: you could count the number of items that I’ve used on this playthrough (which is a few battles off from complete) on two hands, and almost all of them have been blessing stones. This game is tuned relatively tightly (for some fights more than others) but there are a lot of ways to get there. I do kind of agree that items might be the best/easiest, though.

Personally, I like having something for my friends (I mean characters) to do each turn, especially that first turn. Sometimes I let some characters either only move or only use an item so their RT doesn’t grow too much. What’s been working really well for me with two White Knights that can proc the skill that removes 35 RT off nearby units at the start of their turn to NOT have them use an item while everyone ELSE does, so their next turn comes up before the others and suddenly 6 more people get to take their turn in a row on my side.

One thing I will warn you, the two you are talking about (the White Knights), one of them is required for the post game content. Which one do you still have?

I went Chaos route maybe I should have gone Lawful? I am not so far ahead I think that I couldnt switch.

That’s funny, I get to something kind of similar with my (sadly one until I go World Tarot, because I went Neutral) White Knight: I’ll almost always get a boon of swiftness on him the first pass through the team, then he’ll similarly go near the beginning for the second pass and hopefully hit everyone.

(More generally, I think he might be the best character in this version, pending the post-game stuff, though again there are a lot of ways to use a lot of good units… but everything he does fits into such a good general package as well as fits into the balance decisions for Reborn.)

Question: For most units, it is clear what kind of damage they deal, based on their weapon. But how about beasts? For example, the Cockatrice’s numbing hook is labeled as slashing damage, and petro breath dark damage. But how about their generic attack?

Way back at the start, I had trouble with recognizing the arc of fire, so as to see when an inadvertent target would take the damage. I resolved that problem long ago. But I still have trouble with special attacks. Something like Ruination. As far as I can see, there is no indication that this is similar to a crossbow shot rather than similar to a blow shot or Dark Weight, and it will hit a unit in between.

Ruination got me several times before I finally remembered. I spent a fair amount of mana attacking trees and bushes with it thinking I was going to hit the character beyond them. No trees were ruined, they’re very sturdy in this game.

I think it’s just that some attacks have their own behaviors that you have to just sort of learn overtime, and that’s why you can rewind time if you make a mistake!

Certainly I used Ruination a bunch without running into the fact that it would damage a target in front of I chose the character in back. As soon as I discovered it by hitting my own guy I Chariot tarot’d it right back to the turn before.

I’ve been looking a bit into the game, and I have two questions, if anybody could answer them:

For the first, you can choose whether up goes up-right or up-left (and everything else adjusts to match, of course). For the second, I don’t think so, but I’m not 100% sure.

Thank you, Up-left seems to correspond to what would not drive me crazy!

Hey, good luck with the game. Been out two and a half months and I am still obsessed with it. :)