Thanks! And thanks for the help! One of these days I’ll get around to porting it to mobile.

Very nice! Though in ten minutes of playing, I only managed to successfully joust once. Can’t get a hang of the timing + hitboxes, and it’s hard to get in enough practice on any of the available modes.

So now my apparent optimal strategy is to play on hard and just jump whenever I see another knight :-P

I was going to mention QWOP vibes, but I see from the comments on the game page that you’re well aware of that.

Glad you’re having fun! Middle of the chest for jousting and plant the tip of the lance at the base of the Vault flag for vaulting!

The Jumping Jouster is on the Mac App Store now. Speaking of which, getting it submitted there was harder than making the game. Haha.

Very fun thread! I’ve got more experience as an artist than as a coder, but I might put together a little 10-minute murder mystery (really an adventure game) using Renpy and my own artwork. Probably not til after the New Year, though.

Very fun thread! I’ve got more experience as an artist than as a coder, but I might put together a little 10-minute murder mystery (really an adventure game) using Renpy and my own artwork. Probably not til after the New Year, though.

Cool, thanks for the link!

I say this…pretty much every year, but I’m thinking of doing a bit of a Christmas break code project. I usually do Advent of Code, but a) I missed the start this year, and b) last year some of the challenges were basically implementing rudimentary ascii game engines, and if I’m going to do that, I might as well do it for real.

I was thinking of either playing with Godot a bit (probably in 2d), or trying to hack at a roguelike idea I’ve had. Maybe both? Any recommendations for either a Godot getting started tutorial or a simple engine appropriate for roguelikes?

Godot is awesome! I did the Ben Tristem Udemy course about it and it was excellent. If you want to do a rogue like, check out libtcod or rot.js.

Looks like that course is on sale right now! I’ll check it out, thanks!

FWIW, this is the one I was talking about:

I worked through all of the projects/lectures and then had a great understanding of where to go. You probably could stop after the first projects if you feel like you have enough of a base to get started on your own project. I really like Godot a lot. It’s far easier to work with, in my opinion, than Unity.

Advent of Code this year has most of the challenges around a “IntCode Computer”. Though it got to the point where it has ASCII input and output and Arkanoid-like games, so yeah. ;)

Anyway, Godot is great. Perhaps not the best choice if you’re going for a standard roguelike, but it’s certainly doable there if you want.

My little Gamemaker RPG project has come to seem like the great unattainable project in my life. I think about it all the time but have very little time to work on it, because at home with a little kid around I just can’t get the solitude and concentration it requires.

Every tiny step forward feels like a major victory. Today on my lunch break I solved a bug that had been eating at me for weeks, a mysterious failure of my scheduled NPCs to go to sleep at the appropriate time. They were failing a key if/then check because I had accidentally put a variable name in quotes. Fixing the bug created another one, but that one was easily squashed.

NPC scheduling and pathing is literally all I have worked on in this game for at least a year. It’s a thorny problem and one I am probably not a good enough coder to tackle, but I just have no interest in making a game where the NPCs are mostly-stationary merchants and quest dispensers. Lots of great games do that, from Divinity Original Sin to Grim Dawn. But it’s not for me.

These are great for small projects and prototyping and are free for 24 hours:

Wow yeah those look fantastic! Thanks for the plug!

The micro RPG/Roguelike #gameassets are now available for everyone to use in anything (CC0)! Grab these 90 tiles + 90 colored tiles for free: kenney.nl/assets/micro-r… #gamedev https://t.co/tP2JDumHb4 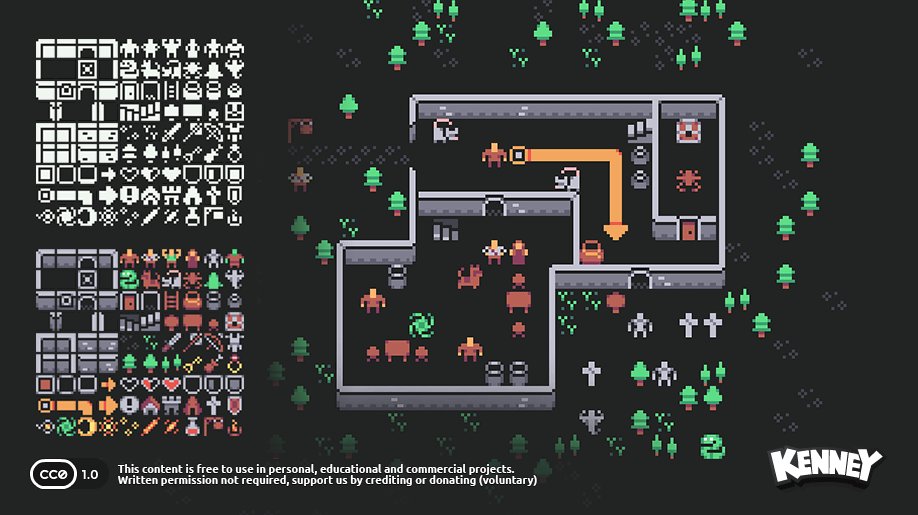