I’m not great with maps, so I get easily thrown off by the deforming landscape and coming out of tactical battles facing a different direction. Couple that with I don’t really know what I’m doing other than running into a bunch of battles and I’ll admit to mostly just wandering around!

As for classes and tactics, I’ve not unlocked a bunch. My approach so far has been to have 3 ranged and 3 tanks. The archer using poison and some effect that makes it so it hits multiple targets while doing continued damage is probably the best thing I’ve discovered. The area effect on my witch dude isn’t bad, but he’s a bit of a glass cannon. On the melee side the knight is ok, I like the pole arm dude more. Oh and melee guys must have that reaction effect that makes them hit an enemy when they passed near them, frankly I’m pretty sure I’ve made a point of giving that to everyone I can, I get a lot of kills from that and it’s a thing of beauty to kill an enemy on their turn.

In most engagements I spend pretty most all of my time working to unnerve whoever is next up turn wise so I can keep jumping line and dealing damage or healing. And if one of their healers is lurking in the back I’ll use that teleport skill to jump next to them and take them out.

Like I’ve mentioned, the battles are really good, in fact they’re so good that when I come out of one I’ve usually forgotten where I was going or what I was planning.

I’m competent at the tactical and I’m utterly rubbish on the story/strategic piece. haha

Definitely head for that objective marker if you haven’t already! That should give you some direction and start to expand on the tactical battles. You’ll still have to find your way around without markers afterwards but hopefully that will be enough to keep you going. Oh! Keep an eye out for things flying in the sky, they look like dots, but they’re a sign of a nearby bird nests which you can collect to increase your flock and help you navigate.

Tell me this, I see what I assume is the main castle at the center of the map, it has a star on it that says “the great pilgrimage”. Is that by chance the main quest I need to find my way to?

Because it sits on top of a mountain and I spent the last hour or two engaging enemies trying to find a path up and all I uncovered were un-scalable walls so far.

Am I barking up the right tree here?

Ah, you’re a little further on than I expected! So you’ve ventured west and spoken to the spirit about the fog and how to deal with it (which opens up the great pilgrimage objective). It should have also told you about the nurseries scattered across the archipelago that you can visit to unlock new goblin classes. Next to the tower near the spirit there’s a noticeboard which gives you a map marking their locations. I investigated all those before making the great pilgrimage! Getting up to the castle is tricky and it took me quite a while to find the way up.

Guess I’ll try and find those nurseries then. I keep playing this because the tactical battles are really very very good. The music is pretty cool. I like the graphics because as I’ve mentioned they remind me of Massive Chalice.

The part that falls down for me is the map. Even if I was to successfully navigate it, what I find is so sparsely developed both in terms of character development and story as to make it seem hardly worth the trouble of finding it. So for me at least the map is really verging on show stopping bad. Lots of effort to get around with not much pay off.

Because honestly all the fun here is the tactical battles and I can find those literally anywhere.

My advice to the developer would have been condense the map a lot and spend more time fleshing out what’s on it. Take my goblins, they honestly have zero personality and say pretty much nothing.

Yet even in spite of all these shortcomings the tactical battles are so good I just keep playing it anyway. It’s hard to argue that the dev team didn’t just knock it out of the park there make no mistake about it. I consider the combos and enhancements you can choose from brilliant bit of fun. I would have made obstacles like tree stumps interfere with LOS, but minor quibble.

As we speak I’m playing this some more. 25 hours of just me bumbling around fighting battles and I’m still doing it, haha.

Yeah that’s exactly what I was getting at in the original post: Tenderfoot Tactics isn’t really concerned with characters, a big story, dialogue, side quests, dungeons, things to tick off etc. It’s very minimalist, textural and ambient so I totally get folk not jamming with that. It’s like a tactics game meets Proteus, which makes sense because Ice Water Games also made Eidolon.

At first I expected more too but I felt like that was me bringing my baggage in from other open world games which are usually praised for ‘something interesting to see or do over every hill’. I often wish more games had the confidence to let their game worlds and spaces breath a little instead of filling them with stuff. Tenderfoot Tactics feels the opposite to that by design; it’s all about negative space which, at least to me, makes each new sight or discovery all the more affecting and memorable. A lot of them are just very odd too. I’m a graphic designer so negative space is something I don’t get to indulge in with clients because they always want to fill all the space with pictures and text, so I feel that same rebellious energy here! :-) I’m also reminded of Shadow of the Colossus’ vast but barren world.

Anyway, I’m glad you’re digging the tactical battles! They really are cool and satisfying. Keep me posted on your progress with the nurseries; there are some very interesting classes, abilities and synergies with different items.

Remember: sliding down hills is super quick, using your boat is faster than going across land, and you don’t have to fight everything on route! That might ease the overworld travel and getting around a little! :-)

It also helped that I was in awe of the colour palettes and landscapes! I loved moving through all that as it bubbled and rippled around me. I took a lot of screenshots! 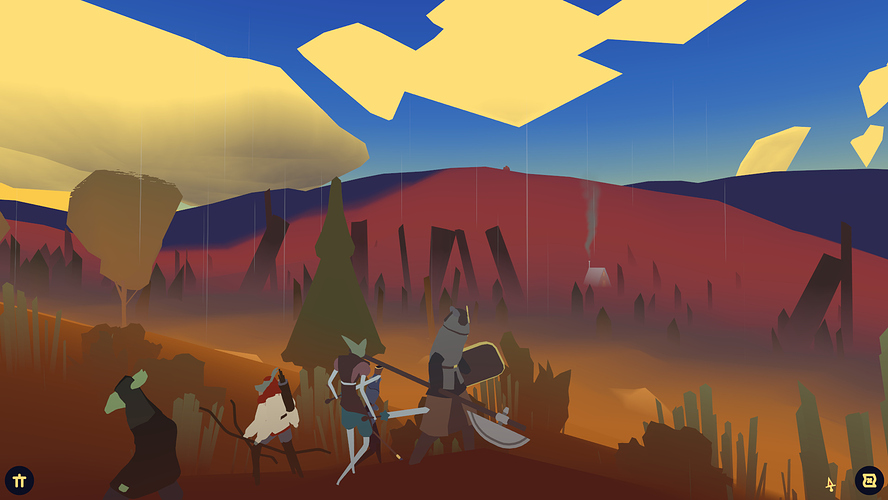 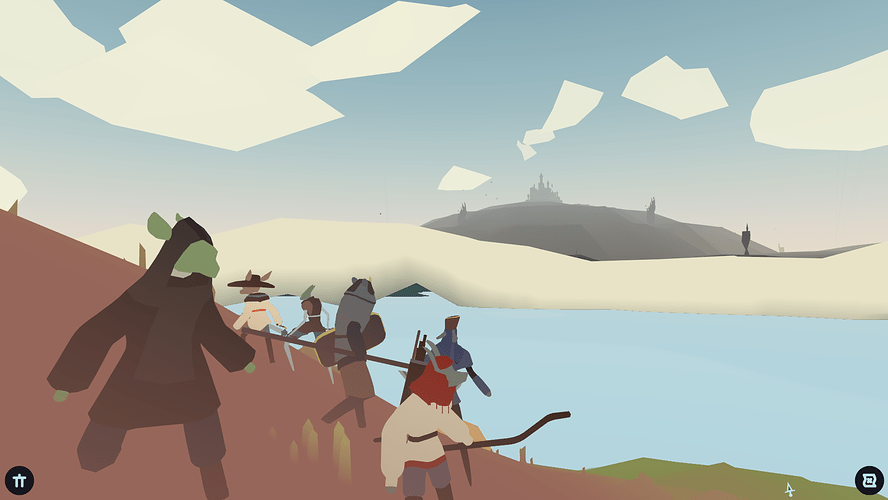 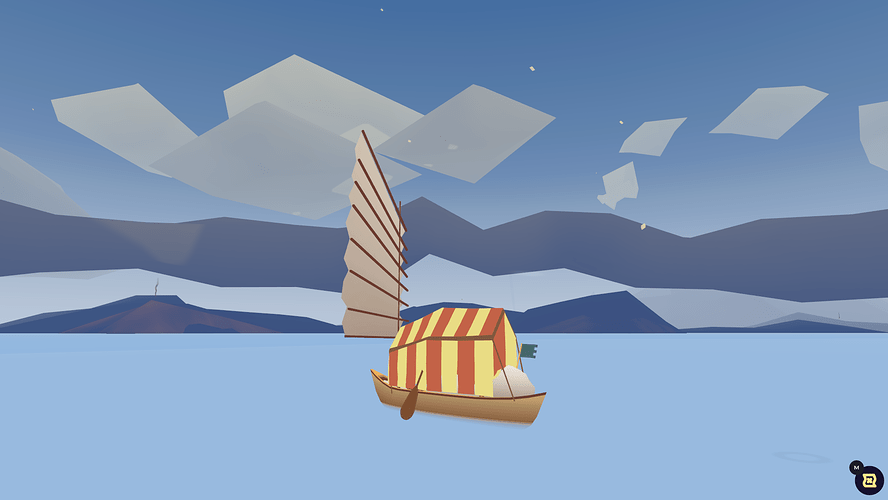 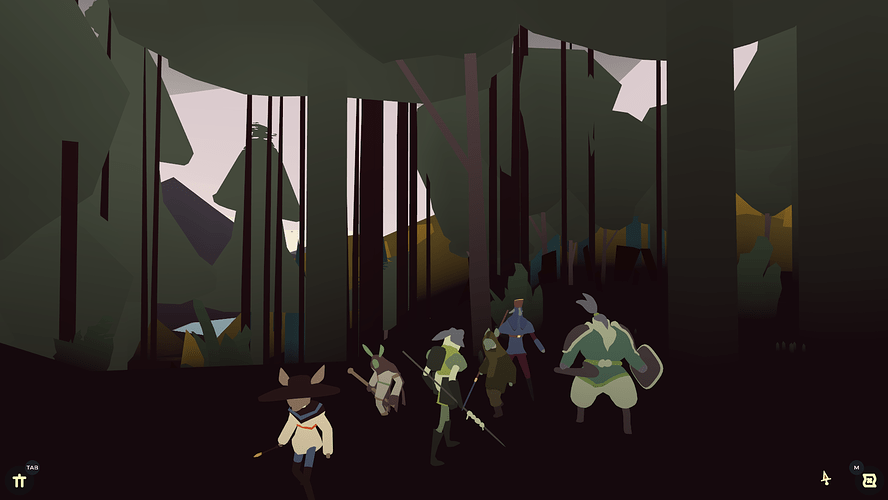 Is there just the one world map, or are there several? Also, I wish the maps had a “you are here” marker when you first discover them. Even shopping mall directories have those.

There’s one world but quite a few maps of it, in different orientations with different notes on them and in some cases focusing on specific areas. There’s usually one map in each goblin town.

I bought this, despite never really having played any tactics RPGs, because Eidolon is one of my favourite ever games. I’m really enjoying it - the battles are just these lovely, self-contained little things - full of surprises.

BUT, I’m stuck! I headed west and chatted to the spirit about nurseries - then found the nearest one on an island to the north of there. At least I think I did - there seems to be no way to interact with the buildings.

I thought that perhaps I needed to clear the island of fog, but that seems to have made no difference. Am I barking up the wrong tree here?

No idea, but welcome! Hopefully someone will have a proper answer soon.

Hi Tim, and welcome! Glad you’re enjoying Tenderfoot Tactics. I still think about it often and have been seriously considering nominating a track for the Game Music Thunderdome!

Are you sure it’s a nursery? They’re usually doorways in the side of hills (with little highlights). It sounds like you’re on the right track though!

You’re right! I just realised I was looking at the OTHER map, so I guess what I found was… a town or something?

I realise now I actually found a nursery in the 1st 10 minutes of the game, but got my a**e kicked so decided not to go back ;-)

Thanks for replying so fast

Oh, I think I know where you mean. Was it here?

I’ve trimmed my goblin party off to avoid spoiling some of the other specialist classes. Interestingly, that island features in the Tenderfoot Tactics pre-release demo, ‘The Festival of the Spirit’. The island is bursting with life and goblins and celebration so to see it in such a state of disrepair in the main game is quite a shock! Oh, fascinating, just found this: 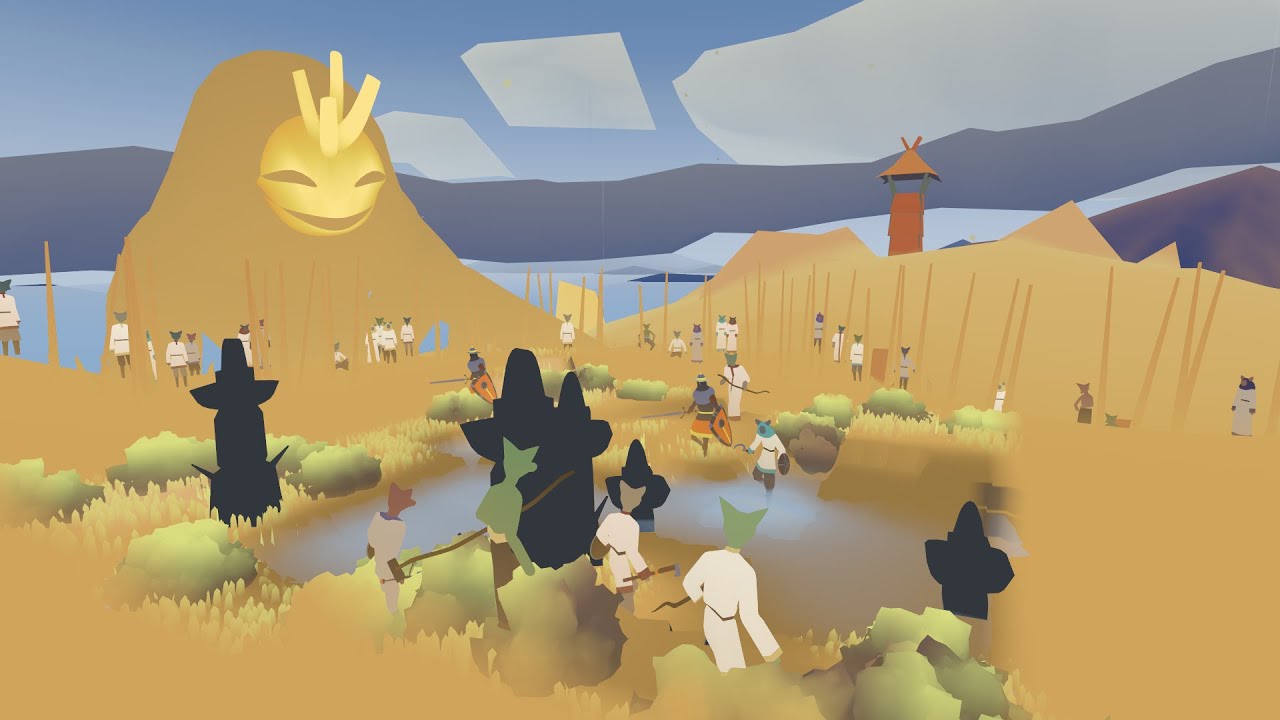