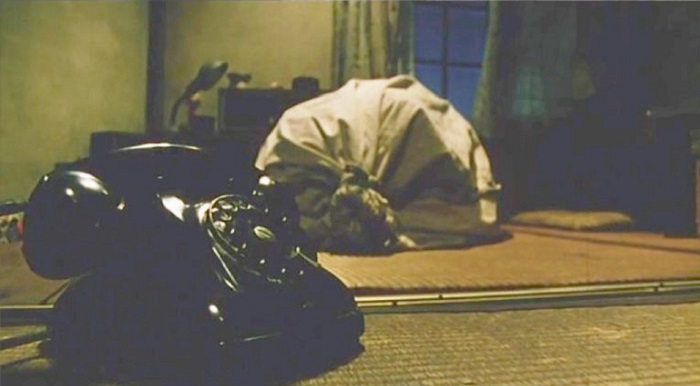 Bill: The first thing anyone new to the films of Japanese director Takashi Miike should do is visit his entry on IMDB. Just look at that headshot..

I like the comparison to Angel Heart, that's a really apt analog to that film. And unfortunately, one I like much more than Audition.

I agree with you, but then again, Angel Heart is one of my favorite films. I liked Audition, but it's a tough film to recommend, and not just for the rather gruesome ending. The beginning sequence goes on a little too long, and Aoyama's search for the truth about Asami ends just as its completely found momentum. But...Miike's gonna Miike, I guess. This was my first movie from him, and I think I want to see more, simply because--as Bill suggests--he does stuff that you'd never see any other seasoned director do. That's interesting to me, and in the final reckoning, part of why I liked this movie.

13 Assassins is on Netflix. I highly recommend watching this one. It's not horror, but it is a very, very good samurai flick. Then watch Ichi the Killer for pure, out of control Miike (also available on Netflix).

...apparently he directed a live action Ace Attorney movie. I mean, I knew that the movie existed, but I didn't know it was Miike. Now I need to see this.

In terms of horror, he also did One Missed Call, which was on our potential list for this feature for a while and which I would also recommend. It's more conventional ghost story stuff, with a pretty dumb premise that Miike makes much more interesting than it has any right to be. Pretty creepy, too.

I'd additionally recommend the Dead or Alive movies (nothing to do with the videogame franchise as far as I know), Rainy Dog, Gozu, The Happiness of the Katakuris (a comedy musical about corpse disposal and murder), Visitor Q (though...be warned, this is pretty peak transgressive Miike), the TV miniseries MPD Psycho, Sukiyaki Western Django (guest starring Tarantino), etc. Note that he does have his fair share of duds, and I for one didn't get much out of, say, The Bird People of Ancient China, or the prison drama Sabu, etc. Not because they weren't gonzo (although they weren't) - I dug Rainy Dog, which is pretty sedate as well - but because they were really pretty glacial. But he does so much stuff in so many different forms that you can just move on to the next thing and probably enjoy it.

Edit: And a Yakuza movie! (based on the game Yakuza, I mean; obviously he's made tons of movies about yakuza in general.)