Fun facts: This was originally going to be part of the Universal monster movie shared universe with The Mummy when it was first being written by David S. Goyer and starring Johnny Depp as the titular monster. Once The Mummy flopped and the Dark Universe fell apart, the project got pushed down to Blumhouse. Oliver Jackson-Cohen will now play the Invisible Man.

EDIT: I would also have accepted, “I liked this movie better when it was called Hollow Man.”

“I liked this movie better when it was called Hollow Man.”

I liked it better when it starred Claude Rains

Oh yeah, there have been a few great movies featuring invisible folks, but this one seemed closest to Hollow Man to me in terms of making it gross and not-fun.

The best though is actually this one: 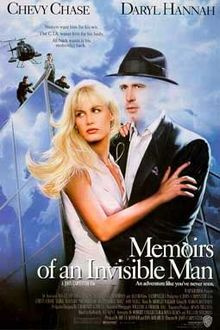 When I was a kid the best thing about the Rains version was when Halloween came around all you needed was a roll of gauze, a pair of sunglasses, and gloves and - voila!

Another fun fact: The Invisible Man in the Claude Rains version has the highest kill count out of all the Universal monsters. He derails a train and kills over a hundred passengers.

Hey, this movie comes out tomorrow! Needless to say I haven’t seen it yet, but I’m intrigued by the reviews I’ve seen, that the movie seems to be told from the perspective of the intended victim, Elizabeth Moss, and seems to use blank space quite effectively - kind of like how It Follows did. Might be good! Here’s a scientific study for how scary the movie actually is -

How Scary Is The Invisible Man, the New Elisabeth Moss Movie?

Our highly scientific Scaredy Scale helps you determine whether new movies are too scary for you.

We saw Invisible Man last week, the Blumhouse remake, and it’s a massive shock that it’s actually likeable and a little surprising. Hell I was shocked I liked it, but it’s smart, it doesn’t sit on a particular theme for too long before changing tracks, and Elisabeth Moss is yet again completely great. She carries this movie from beginning to end. It’s more of a psychological thriller than horror, though it has horror (and sci-fi) elements. The mechanics of the “invisibility” are kinda goofy, but hey it’s a goofy concept so this one is as good as any other. I think maybe the cut out a little too much from this movie as some of the characters seem unnecessarily shallow but that’s the only other real complaint.

But yes actually if you’re curious about this movie, go watch it.

Yeah, it was very good. Even when a story beat was predictable, they somehow managed to execute it in a surprising and effective manner.

One of the friends I went with didn’t know what we were going to see, they were in with just a “want to go see a movie?”. I’m really bummed I didn’t realize when the title card was going to come up and ask him to not look, because it would have been really fascinating to know what they thought was going on.

I really liked this.