The Top Ten Solitaire Boardgames of All Time

You technically wouldn’t have to keep up, but if you’re netdecking, people are going to assume you have access to the latest player cards.

Oohh, I haven’t played the game so I wasn’t connecting the dots about the net decking. Got it.

So because of the discussions in this thread, I ordered Champions of Hara and Elder Sign: Gates of Arkham (I have the base game and Omens of the Deep, which I hope Gates plays well with) last night. Hopefully by the time they arrive I’ll have gotten stuff to where I have a table set up to play those, Hornet Leader, and Apocrypha!

Oh right, they’re typically 8 scenarios, I’d forgotten. And the “Return” stuff has been ticking along about 3-ish cycles later.

My list below. I’ve enjoyed reading everyone else’s, thanks!

The only game that doesn’t fit in the adventure! Category is Hero of Weehauken, a goofy little history lesson about Aaron Burr later in life, and what may or may not have been intentional sedition. It’s got a unique two-act story where first you are trying to find Burr and associates and later you are trying to amass evidence in court to convict him for the right thing. For me this has the most lasting power of any of Victory Point’s games.

Honorable mentions for games that I probably would play solitaire except I play them with my partner instead: Roll Player, Spirit Island (our favorite game).

For Apocrypha, is there either a good odds calculator or a handy rule of thumb? I’m having difficulty adjusting my mental arithmetic from PACG.

There’s this on BGG, but it doesn’t take re-rolls, +1’s, exploding dice, etc into account:
https://boardgamegeek.com/filepage/159345/die-odds

Yeah, figuring out which die roll play to make in Apocrypha is like its own sub-genre of math geek gaming unto itself.

GY, if you ever find a good calculator/spreadsheet for this, share with the class. :)

My only (to date) experience with solitaire board games are the Tiny Epic series, which i love for their easy setup and above average graphics (i’m also not keen on deck building game designs).

Tiny Epic Defenders - probably the best solo game of the bunch because it is by design PvE and not PvP, so there’s little difference between 1 player and 2 player games mechanically. There’s still some randomness is card draws and certain randomness in items pulled. You can also easily make some house rules for yourself and tweak the enemy deck by one or two cards or rules if you find it a solved problem.

Tiny Epic Quest - a superior game to Defenders but maybe an inferior solo game. Because you’re just trying to run up the score rather than play against an AI opponent it really is about pushing your luck and min-maxing your moves.

Tiny Epic Galaxies - asymmetric solo play, it’s fun in that the AI player has different difficulty “player cards” that you can run through, but the hardest difficulties are very lopsided in giving the AI significant bonuses. Still a push your luck game, eventually you figure out how to manipulate the AI.

Tiny Epic Kingdoms - It’s not an entirely satisfying AI opponent though it does work fine, and it tries to make the AI at least functional at making choices. But the huge bonuses it has against you by default overwhelm the faction differences and make playing vs Orks or vs Goblins or Elves or whatever totally irrelevant compared to the massive basic economy bonuses it otherwise has. Probably needs some house rules to make the factions more distinct.

I also owned Navajo Wars (as recommended here!) but haven’t even cracked it open yet.

I do have One Deck Dungeon and Friday arriving this week (though lord knows when i’ll be able to play them.)

No luck so far, though thanks for the link, Matt. I may end up building one myself.

I’ve only played two solitaire games, but that doesn’t make ranking then any easier: (1) Navajo Wars and (2) Leaving Earth.

I really like Leaving Earth, but without other players the turns lose their importance. Most of the significant decisions are apparent as soon as the objective cards have been dealt. As long you leave yourself some wiggle room for malfunctions, you can plan every step of the game from the first turn.

And that’s a fine way to play the game, but it becomes a little bit stale. It sounds like the expansion helps by making timing more of a factor, so I may pick it up one day. But mostly I feel like the game needs the tension of racing against someone else.

On the other hand, I have no desire to try Navajo Wars with another player. That’s a fun one to sit and think about. The mechanics leave the player feeling very vulnerable. If you try to play energetically and aggressively, the AI system reacts in kind, pushing into your territory and capturing the land, women, elders, and children you need to survive.

Though my memory is a bit hazy on this part, it also handles time in a clever way. Rather than assigning a set number of turns to a year, the different actions a player takes determine the passage of time. Some actions could only be completed by letting time pass, which gave the AI more opportunities to act.

I’m a bit sad I won’t get a chance to play Commancheria, but I’m happy to keep playing Navajo Wars.

Oh, holy hell. I ordered last friday and just got word my copy of Apocrypha won’t arrive till July 7.

Me too. Orlando to Washington…ugh

Well, Petey, my copy (and both expansions) just showed up on my doorstep a whole day early. I live in a semi-rural town in Oregon, so maybe yours is arriving in Washington today as well?

I also got a bunch of promo cards I wasn’t expecting. A pack of 4 cards with the simple name of “Apocrypha: the World Promo card Set (LSG00112P),” and another set of 4 cards called "Apocrypha Second Wave Promo (LSG00111). So that’s awesome.

One of the promo cards has a QR code on it, and I immediately scanned it. I tend to scan every QR code I ever see anywhere… because apparently I’m a trained monkey.

Anyway, this is the card: 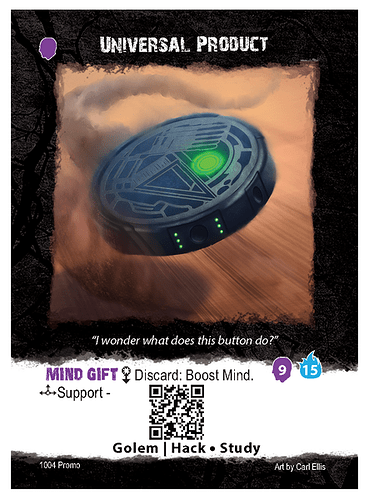 And BGG says this about it:

Mind gift Promo card for the Apocrypha Adventure Card Game sent to Kickstarter backers. Also available when purchasing the base game through the Penny Arcade web store and at conventions.

In other, related, news. I’m about to go eat a bunch of greasy fried chicken my wife brought home, and when I’m done I’ll be playing my copy of the the Apocrypha base game (after washing my hands, of course. I’m not a barbarian!). I’ve been watching gameplay and tutorial videos all week while waiting for this game to arrive. I feel confident that the first game should go much better for me than those poor souls who jump in blind. But we shall see. Based on reading The Golden Rule section of the manual alone has me thinking that during early games Apocrypha is going to have 10 minutes of rules lawyering for every card played.

And yeah, the Golden Rules in Apocrypha are SUPER important. It gets easier after a game or two to just sort of intuitively know which instruction is the one that takes precedence, but yeah. Rules study will be a thing your first couple of games for sure. And then even after, sometimes.

Well, Petey, my copy (and both expansions) just showed up on my doorstep a whole day early. I live in a semi-rural town in Oregon, so maybe yours is arriving in Washington today as well?

Yep, my copy and 1 expansion are out for delivery…now the hard part!

Does anyone know where I can get a copy of Cloudspire?

Go to The Game Steward. It says they have 2 in stock. They are trustworthy!

For what it’s worth, that’s probably not the updated edition that was recently Kickstarted (w/ reprint and additional content). I’d possibly wait for reprint copies to hit, since I’m not sure there’s going to be availability for the update pack at retail.

Then again, I don’t know how major the updates are as I didn’t get in on Cloudspire originally.

Re: The #1 Solitaire Boardgame of all time, Apocrypha

Whew. Since posting 6 or so hours ago that my box arrived, I finally had the time to:

And here I am.

So far I’m finding the time I spent this week watching tutorial and gameplay videos to be invaluable. The literal literal tone of the instructions, and the cards, symbols, and keywords seem much more intuitive to me after having done so than I could ever imagine them being had I not already heard several times over (in this very thread in addition to the videos) what to expect. The entire concept of Omens, Saint’s Nexuses, Halos, Fragments, and True Threats vs Archetypes vs Gifts & Threats are also much more relatable to me.

I can already tell this is a game I will enjoy quite a bit. The artwork and lore are right up my alley. I dig the tone and the modern horror setting. And I love the stories behind the missions I’ve glanced at so far.

My only issue right now is table space. I’m playing on a smaller footprint than I would like, and it’s making each Saint’s deck, hand, discard pile, and portrait card & bury pile a game of careful manipulation to play with without screwing up another Saint next to it. AND THIS IS WITHOUT ANY HALOS. I don’t know what I’m going to do once I’m wielding fragment halos. I might just have to get a different (wider) table to play at.

One other quibble I have is that the base game has 10 possible Saint’s to choose and play, but it only came with 6 plastic stands for their avatar tokens. WTF. If I have to slide the base off and on each time I swap characters I’m expecting the cardboard avatar tokens to get obliterated. One of my first orders of business will be getting more of those plastic stands.

One other quibble I have is that the base game has 10 possible Saint’s to choose and play, but it only came with 6 plastic stands for their avatar tokens. WTF.

Yeah, it’s at most a six player game, and there’s only enough cards to have six saints on the go at once, so… save a couple pennies by only giving you six stands! :P

There’s probably another two in each of the expansion boxes… ;)

My friendly local game store here in Portland actually had a few copies of Renegade, so I picked it up for $45 on Tom’s recommendation. There was at least one more when I left, so if any eager QT3ers are interested, I’d be willing to help secure a copy.