In school I learned this was “farmers got mad about taxes and rebelled for no apparent reason”, but it’s actually really interesting.

The whiskey excise was immediately controversial, with many people on the frontier arguing that the tax unfairly targeted westerners.[9] Whiskey was a popular drink, and farmers often supplemented their income by operating small stills.[10] Farmers living west of the Appalachian Mountains distilled their excess grain into whiskey, which was easier and more profitable to transport over the mountains than the more cumbersome grain. A whiskey tax would make western farmers less competitive with eastern grain producers.[11] Additionally, cash was always in short supply on the frontier, and so whiskey often served as a medium of exchange. For poorer people who were paid in whiskey, the excise was essentially an income tax that wealthier easterners did not pay.[12]

Small farmers also protested that Hamilton’s excise effectively gave unfair tax breaks to large distillers, most of whom were based in the east. There were two methods of paying the whiskey excise: paying a flat fee or paying by the gallon. Large distillers produced whiskey in volume and could afford the flat fee. The more efficient they became, the less tax per gallon they would pay. Western farmers who owned small stills did not usually operate them year-round at full capacity, and so they ended up paying a higher tax per gallon, which made them less competitive.[13] Small distillers believed that Hamilton deliberately designed the tax to ruin them and promote big business, a view endorsed by some historians.[14] However, historian Thomas Slaughter argued that a “conspiracy of this sort is difficult to document”.[15] Whether by design or not, large distillers recognized the advantage that the excise gave them, and they supported the tax.[16]

In addition to the whiskey tax, westerners had a number of other grievances with the national government. Chief among these was the perception that the government was not adequately protecting the western frontier: the Northwest Indian War was going badly for the U.S., with major losses in 1791. Furthermore, westerners were prohibited by Spain (which then owned Louisiana) from using the Mississippi River for commercial navigation. Until these issues were addressed, westerners felt that government was ignoring their security and economic welfare. Adding the whiskey excise to these existing grievances only increased tensions on the frontier.[17]

The Whiskey Rebellion raised the question of what kinds of protests were permissible under the new Constitution. Legal historian Christian G. Fritz argued that, even after ratification of the Constitution, there was not yet a consensus about sovereignty in the U.S. Federalists believed that the government was sovereign because it had been established by the people, and so radical protest actions, which were permissible during the American Revolution, were no longer legitimate. But the Whiskey Rebels and their defenders believed that the Revolution had established the people as a “collective sovereign”, and so the people had the collective right to change or challenge the government through extra-constitutional means.[102]

Historian Steven Boyd argued that the suppression of the Whiskey Rebellion prompted anti-Federalist westerners to finally accept the Constitution, and to seek change by voting for Republicans rather than resisting the government. Federalists, for their part, came to accept that the people could play a greater role in governance. Although Federalists would attempt to restrict speech critical of the government with the Alien and Sedition Acts in 1798, after the Whiskey Rebellion, says Boyd, Federalists no longer challenged the freedom of assembly and the right to petition.[103]

Well I think us Aussies can one up you when it comes to spirit based rebellions, because ours actually ended in an armed takeover of the government

The Rum Rebellion of 1808 was the only successful armed takeover of government in Australian history. During the 19th century, it was widely referred to as the Great Rebellion. The Governor of New South Wales, William Bligh, was deposed by the New South Wales Corps under the command of Major George Johnston, working closely with John Macarthur, on 26 January 1808, 20 years to the day after Arthur Phillip founded the first European settlement in Australia. Afterwards, the colony was ruled by t...


though it probably had more to do with the fact that Bligh was a dick. :)

Not to mention they made a board game about it… :)
Admittedly a pretty crappy board game with little replay value. 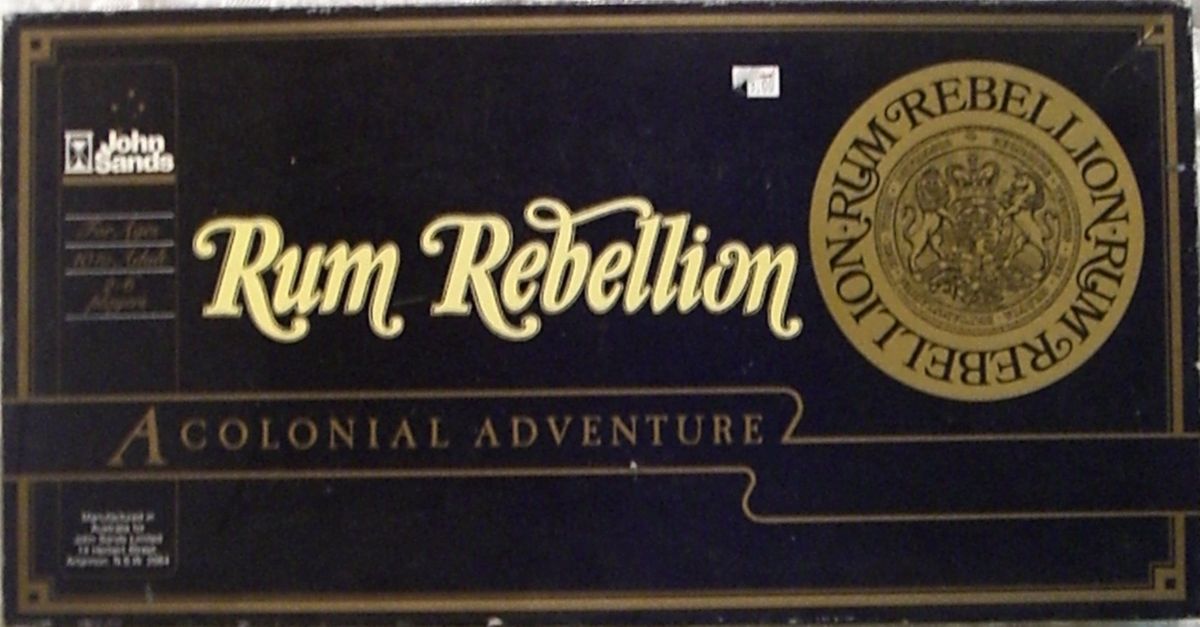 Rum Rebellion - A Colonial Adventure Players move around the board and up the three levels - Convicts transported to Australia, Merchants and Rum Corps members in good standing - to reach the top and be declared Acting Governor or the Colony. There...

I’m probably a fair bit younger than you, but this is pretty much what I was taught in high school US history.

The part about unequal taxation for large brewers didn’t really come up, but whiskey as currency and as use for excess corn were definitely covered, and I believe it’s taught as the first “test” of the federal government.

I’m probably a fair bit younger than you, but this is pretty much what I was taught in high school US history.

The part about unequal taxation for large brewers didn’t really come up, but whiskey as currency and as use for excess corn were definitely covered, and I believe it’s taught as the first “test” of the federal government.

This pretty much sums it up for me as well.

I also lucked out a bit and had high school history teachers who actually both knew and cared about teaching the subject.