Ok, we had a discussion going about this game in the Indie games thread that got locked for some reason.

So I’ll copy @Nightgaunt’s excellent post about the game here:

Has there not been any discussion here of Thumper??

I’ve had my eye on it for a long time, and it’s on sale this week, so I finally grabbed it.

It’s a game about… uh… a beetle? Seems like a very angry beetle. It rockets along this long track surrounded by surreal symmetrical tentacles and geometry. And there’s loud music, and you have to hit buttons and turn at the right times our you blow up in a violent burst of red light. And sometimes there’s a goofy looking giant head you’re attacking.

So it’s a rhythm game, is what I’m trying to say.

There’s not necessarily a lot to the game, but the presentation is pretty remarkable. Particularly the feeling of speed and impact, which is really what the game is all about. Or to collapse it down to one word, it’s about “intensity.” The game is intense. The music isn’t pleasant–it’s harsh and clangy. Your little beetle certainly isn’t cute. It doesn’t have any personality. It just flies along the track, vibrating, and slamming into walls. And occasionally flying over things.

I think @tomchick compared Thumper disfavorably to Aaero. And Aaero definitely has a lot more variety of things to see, hear, and shoot. But somehow Thumper has gripped me a lot more than Aaero did. I didn’t care for Aaero’s music, and never did get the hang of shooting things (despite my Rez bona fides).

Thumper is one of those rhythm games where you sometimes hit a flow state and find yourself doing these amazing combinations of moves without even thinking about it. That’s really satisfying. And I think the tone of almost-horror the game gives off is really unique and extraordinary given how little there is that goes into it. 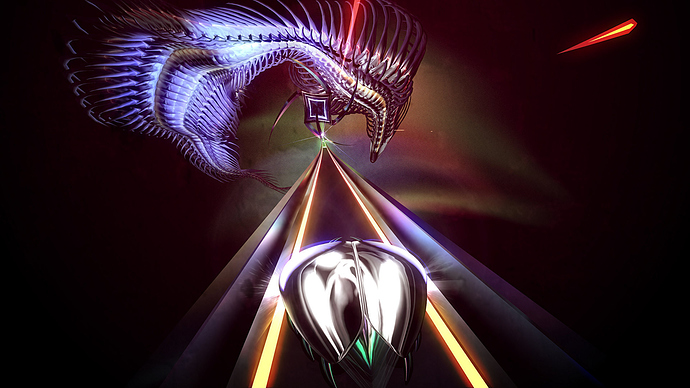 I had a really tough time with the game, but I recently re-installed it again when I heard it had come to Stadia. I mean, for god’s sake, STADIA! If there was enough leeway on the timing that the game can be played on Stadia, I must be doing something wrong, so I installed it again this weekend, and I got through the first level!

Wooohoooo! I’m in baby! I know how to play.

So here’s some key tips about what I was doing wrong:

When you turn your ship, you don’t have to turn and press A at the moment of the turn. It’s the only way to earn yourself a satisfying sound effect, yes, but the truth is, you can turn in advance on the stick, and you can just keep the A button pressed. Easy peesy. I was trying to do all the turns the hard way and failing spectacularly.

The same is true for a lot of the in-game shenanigans. Experiment, and learn what you need precise timing for and which parts you can do in advance that you don’t need timing for.

I loved the vibe of this game, as much as I disliked the one in Aaero, but holy crap does this game kick my ass. I can’t recall how far I got into it, level 5 I think, but it’s the first game that made me realise I am not 20 anymore with lightning-fast reflexes or brain processing. I came to fear playing it, because it was physically painful to try and keep up (my poor wrists) and depressing that I could feel my body falling apart while playing it. It was doing to my brain what One Finger Death Punch was doing to my finger joints.

Incidentally your strategy will not work as you progress - you need precision timing to survive, particularly on the relentless series of turns later on.

Yes, but my strategy will work on the first two levels! Considering I couldn’t even do that for the longest time, I still consider it a triumph. Finishing Level 1 feels like one of the hardest achievement I’ve earned.

Musical journey into existential dread pretty much sums up my career.

Thanks to this, I’m going to go back to Thumper. It’s been awhile.

Also, because I’m kind of in a bad mood today, I’m going to go sour grapes and say that that indie thread should never have been collapsed with the other one because there’s a big difference between talking about a game you’ve actually played and want to share with people and talking about one–or just linking one!–you happened to see pass through the Steam upcoming games list.

You had me at existential dread! But then you lost me at rhythm game. I guess that balances out.

Haha, thanks for the posts. I admit the game looks fascinating, but I don’t think I need any more aggravation in my life right now, fascinating or otherwise.

Booyah! I finished Level 4. I was feeling really, really proud of myself for about 30 seconds.

need to go back to this, I love it in PSVR. No motionsickness and very smooth FPS, I think I got stuck in level 4, too

Hey! That was you krayzkrok. How come you bought Thumper again in the Steam sale?

Also has ANYONE gotten past Level 5’s start? Is it possible? I just can’t press buttons fast enough.

I had refunded it. I thought “No, this game is not for me it’s too hard”. What got me to buy it again is its VR implementation, plus the fact whenever I saw it mentioned I couldn’t stop thinking about it (oh, and it was on sale). Perhaps second time will be the charm? Either way, having refunded it once I won’t be allowed to refund it again, so let’s do this!

I found it easier in VR, played to level 4 I think (changing lanes), always wanted to go back…

Level 5 is the killer! But this time I will conquer it. Maybe.

Five was about where I stalled out. I do recall I had much better results playing with a keyboard than with a controller though.

So yeah, Thumper is killer in VR. I mean, the desktop version of this game is like strong tea, but the VR version is like Cuban espresso. Possibly double espresso. Anyway, enough caffiene analogies (you can tell I’m drinking coffee right now), but being enveloped in this weird, alien rollercoaster really works a lot better for me and I’m very glad I re-purchased it.

Also, embarrassingly, it seems that last time when I was complaining about how hard level 5 was? Well, ahem, it must have been level… um… 3. In fact, 3-5 hence my likely confusion. This time? Blew past it without any real dramas. Maybe it’s easier when everything is in your face, but whatever I’m having a blast with it. I’m currently some way into level 4 and doing ok. I’m at the point where getting through the levels isn’t necessarily that hard, it’s trying to get an S rank that’s hard. By this stage that generally means thumping (launching, gliding then landing between trigger points) is essential at every opportunity. This is where my brain has trouble keeping up, but as usual memorization really helps.

Also, the end of level boss in really, really freaky in VR.

I felt that it is a bit easier in VR because your so close to the action and can time it better. And no motion sickness at all. Probably because you are not really moving in the game.

Polybius with Thumper were the best VR games to me.