Top five game downgrades, or the lies marketing told you 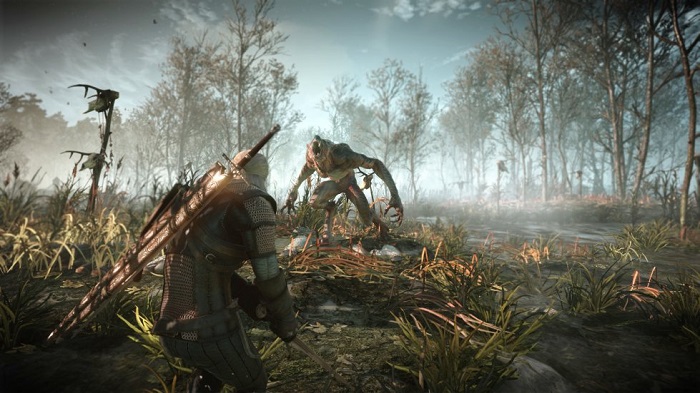 It's a little over a week before The Witcher 3 launches, and the biggest discussion right now isn't the fact that you can have sexual relations with a sorceress while on the back of a stuffed unicorn..

I will hear no criticism of Yar's Revenge. Damn near perfect game. Ugly as hell, but otherwise perfect.

I played the first Madden Football in '88....lousy graphics but best game you can play with a skinned pig...EVAH!!!

And it was beautiful for its time. Easily one of the best 2600 games.

I remember buying an Atari 2600 game called Space Jockey. It had pictures on the box that were carefully disclaimed to be "artist's renditions" of the actual game screens. The thing is, they were basically exactly like the actual game screens, just with some motion lines and slightly different colors. I guess it was a more honest time.
Apart from the rock album artwork, which I miss tremendously. It's a shame that all of those dope-smoking 70s rock fans that used to illustrate video game boxes to make them look like Roger Dean's Yes covers fell out of favor. Yar's Revenge is a great example- "OH MY GOD THIS GAME IS GOING TO BE AMAZING." And it was, but not...like that. But the funny thing is that box art back then still made an impression on the whole product. Like those space dudes on Breakout...I mean, you controlled a LINE hitting a square but in the back of your mind there was some kind of very vague narrative there that the box art created.
Funny thing is that now, the games that REALLY look great aren't the ones that have all of this fancy foliage and whatnot. It's stuff like Mario Kart 8 that is meticulously art-directed and doesn't strive for some kind of silly brass ring of verisimilitude.
Looking at that last picture was more fun than I had than the entire time I played Skyrim, trying to convince myself that I wasn't crazy for vehemently disliking an interactive busy-work activity that was supposed to be a "great" video game.

Difficult to choose between Yar's Revenge and its sequel, Custer's Revenge.

Then you have the art for Zork: http://yois.if-legends.org/ima...

That Skyrim shot. Frog man is so serious!

Destiny? All the great stuff they offered in beta and then took away on release?

Grats on the BoingBoing link :)

I'm dying over here. The link on Boing Boing says this article is for "The Most Disappointing Video Games Ever" which is so far off the mark, it's nuts. The discussion there is made of people that think our list sucks because these aren't the most disappointing games, and other people that don't realize the whole thing is a joke about The Witcher 3 downgrade debate.

Yar's Revenge WAS amazing. Nobody took the covers seriously then.

That is about what Zork was like. I should know.

Didn't you mostly hang out underground though? When did you ever see the house? Do you even have eyes? THE PEOPLE NEED TO KNOW

If this is a joke post then I must say you are rather funny. But as I personally don't feel that it is I have multiple problems with this: 1. Dark souls' biggest selling point is that it is HARD AND YOU WILL DIE. To play it and not expect this at some point or another is like thinking you can beat battle toads on 2 player. 2.It's an Elder scroll game, they are pretty much renown for being one of if not THE MOST MODIFIABLE SERIES. 3. Yar’s Revenge was released on the Atari 2600, that's all that needs to really be said. 4. I don't recall us being promised jack with MoP excluding that we were getting a new race, class, and place to explore

Yar's was a good game, but I get your point.Most Atari 2600 games had an amazing cover, and a lot of disappointment inside.

Thanks for the rec. I skipped it thinking "yeah Conan plays game and makes fun of obvious absurdity, I get it, don't really need to watch the video to get that joke."

Glad I did, I could hardly breathe for a while there.

You should have gone with your initial interpretation.