I wish Ubisoft would quit adding cool updates to Anno 2205. I mean, seriously, who thinks up biomes for a city builder and comes up with space stations? The game already came with the moon, and now it’s on its way to the stars? Enough already! Anno 2205 was already an insidiously effective timesink and one of my favorite citybuilders.

Yeah the season pass should have included this final dlc. Super sucky on Ubi’s part.

I shall continue to protest their shady practices by only getting their games when they are 50% off or more. :p

I’ve had Anno 2205 wishlisted for a while but this is really icky behavior. While I didn’t buy the season pass and am not personally affected, it just makes me want to spend my money elsewhere, you know?

It’s not even a good deal in comparison to other season pass offers. It’s $20 for the pass. Alternatively, it’s $12 per DLC. Since Frontiers isn’t in the pass bundle, there’s only the two DLC bits included. A $4 savings? WTF, Ubisoft? Most other season pass packages give you the discount equivalent to at least 50% of a DLC.

What I don’t get about shortsighted behavior like this is that it’s just going to harm their Season Pass sales going forward. I guess someone really needed to hit their quarterly numbers?

Does anyone know what they actually promised with the season pass?

This is what was posted on the official site:

[quote]
Download the Season Pass of Anno 2205 and unlock the upcoming additional content, including the Tundra and the Orbit.[/quote]

I guess “including” in that means “this is everything.” Did season pass buyers get any “additional content” besides those tow DLC chunks?

I recall getting a unique command ship skin, with the gold edition of the game.

Cosmetic ship skin is a $10 value! The season pass pays for itself!

Holy crap. I’m not sure Digital Homicide games got such low Steam scores. This kind of baloney is going to haunt UBIsoft. 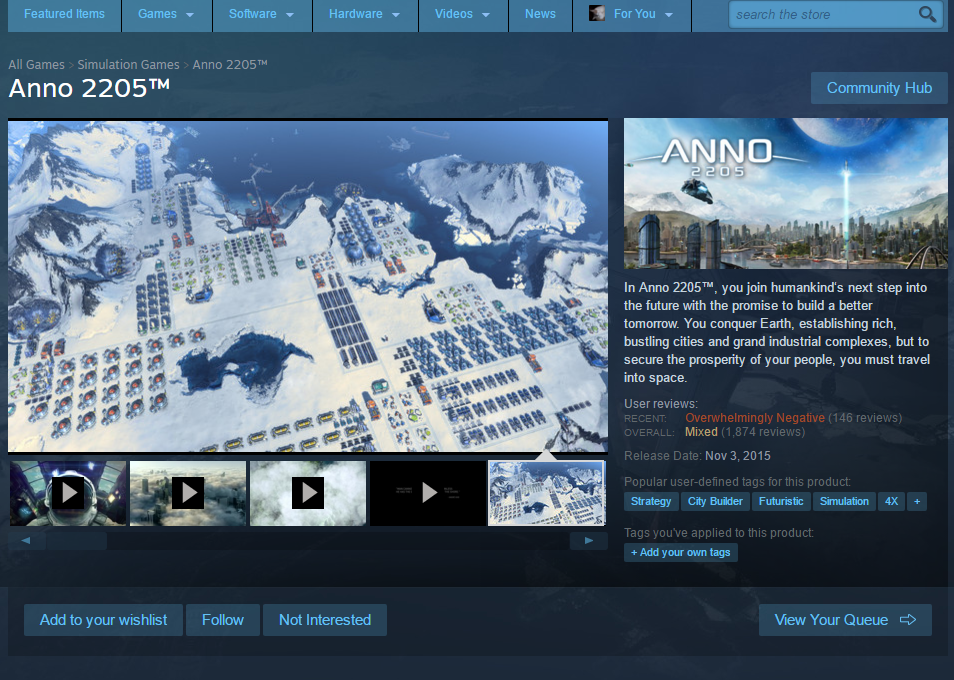 Suddenly, out of the blue, Tom’s review of 2205 becomes contrary to popular opinion again. This time in retrospect!

I’ve never seen a 2% score for a big name property on Steam. Grab some popcorn because UBisoft is going to get sued either individually or by the EU & UK board of advertising. They changed the wording of the Season Pass in Steam from all content to the stated two DLC’s. This is a big no-no and is technically worse than what No Man’s Sky did. 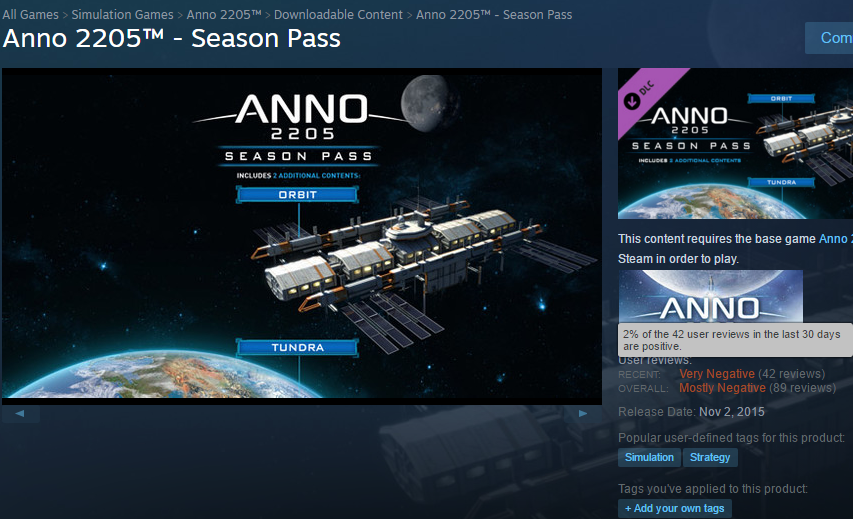 I was not aware they changed the wording. I think I am gonna edit my Steam review to complain. :)

They changed the wording of the Season Pass in Steam from all content to the stated two DLC’s.

Did they? Is there an image of the old wording?

They changed the wording of the Season Pass in Steam from all content to the stated two DLC’s.

According to a bunch of users on Steam and reddit yes, but I’m not sure if anyone had the foresight to take a screenshot of the Season Pass page (I mean, why would you?). Can Google cache bring up Steam stuff? Apparently the change was made 7-14 days ago.

Can Google cache bring up Steam stuff? Apparently the change was made 7-14 days ago.

Good question. This is all I can find.

Looks the same to me.

Edit: I went all the way back to November and as far as I can see the store page for the season pass hasn’t changed at all. There’s even a review for it from the same time (Nov 2015) which is just some guy asking how to unlock the Orbit and Tundra.

Has a company ever done this before? Sold a season pass then added more DLC that is not included?

Can I ask another dumb question? @Nuclearwinter How do you do that? pull different aged pages like that?

I know the 2nd Borderlands did, after the season pass content finished up they had 5 additional smaller dlcs (I think they were holiday related?) that came out.