Water damage on ceiling. Who to call?

First off, I am a home repair idiot. Completely helpless.

I discovered tonight that a big patch of paint on the ceiling of a downstairs bedroom is puckering. It’s below an upstairs bedroom and master bath. I don’t see anything leaking up there.

Do I call a plumber to find the leak? A water damage specialist? Some combination of those things? Is there someway to identify the leak without pulling out the ceiling?

I am out of my element and super stressed. I shouldn’t be allowed to own a home.

I would definitely call someone ASAP, water damage is no joke. Maybe call a plumber and describe the situation and ask for advice over the phone, to start…

Yeah, get a plumber out ASAP to deal with the leak. He’ll know what to look for.

Meantime, if you can find the shutoff valve(s) for the various lines in the bathroom—sink, shower/bath, toilet—it couldn’t hurt to turn those off.

If you’re feeling really paranoid, there is a shutoff valve for the whole house. Fill a sink or two first.

Ceiling repair comes after the plumber is done.

Mostly useless third post to emphasize the urgency of the situation: when it starts to be visible, it isn’t a good sign and it could detoriate quickly.
You don’t need to stress, though: a good plumber is amazing, he’s like the house’s surgeon: he will find where the problem comes from by clinical inspection, and then will proceed to save the life of the house before any terrifying water hemorrhage occurs.

If you know someone that has a GOOD handyman, I’d call them before a plumber. Given you don’t see a leak, it could be in a wall. Even if the plumber will open up the wall, they aren’t going to patch it, so you are going to need someone for that anyway. They can open up the wall and see what the problem is, and probably fix it for a lot less. If a good handyman isn’t an option, go with the plumber.

Another reason you want to get a leak secured ASAP is mold, especially if you live in an already humid area.

If you have a tiled shower, the leak might be coming from a crack in the tile or grout.

A plumber should be equipped to figure things out. Be warned though. It will involve removing the drywall where the leak occurred and then trying to determine where the water came from (if you have a leak in a pipe, water will frequently travel the direction of the studs until it finds a low spot, and then it’ll pool until it comes through the drywall, so the “figuring out where the leak is” may involve removing drywall in a couple of spots).

Plumbers will fix the leak and are typically good at restoring the drywall, including mudding the joints and sanding them down. But most won’t re-paint the repair - so when the plumber is done you’ll end up with one or more drywall patches in your ceiling. So prepare to repaint a couple patches of ceilng… and unless the paint is new you may have trouble matching the color (due to fading, discoloration, etc… even the color known as ‘ceiling white’ differs between manufacturers!). So you will either need to get the paint matched at a Home Depot-like place or resign yourself to repainting the ceiling of the entire room.

I owned an old house for 30 years so I’ve gone through this a lot - I’m not saying this will happen to you, but when you have an old house that’s put together six ways from Sunday, one thing that can happen is you get something fixed, repaint it, it’s all nice, and then the problem comes back (we had repeated issues with a leaky roof… ugh). Now that is frustrating… but your problem can probably be fixed easily!

How do you find a good handyman? This is my first time owning and I have a few little things I want done, but I don’t have the tools, knowhow, or urge to try to do it myself. I have no idea where to get that kind of help.

Angieslist, Homeadvisor, Nextdoor are all worth checking if they operate in your area. Nextdoor is community site but always been a good source of recommendations for us, its basically the equivalent of asking your neighbors. I think there is something of an art to picking the right people from these sites but you learn quickly what to be suspicious of.

Personally, I tend to stay away from Handymen though, never found them to be good value for money in the end. 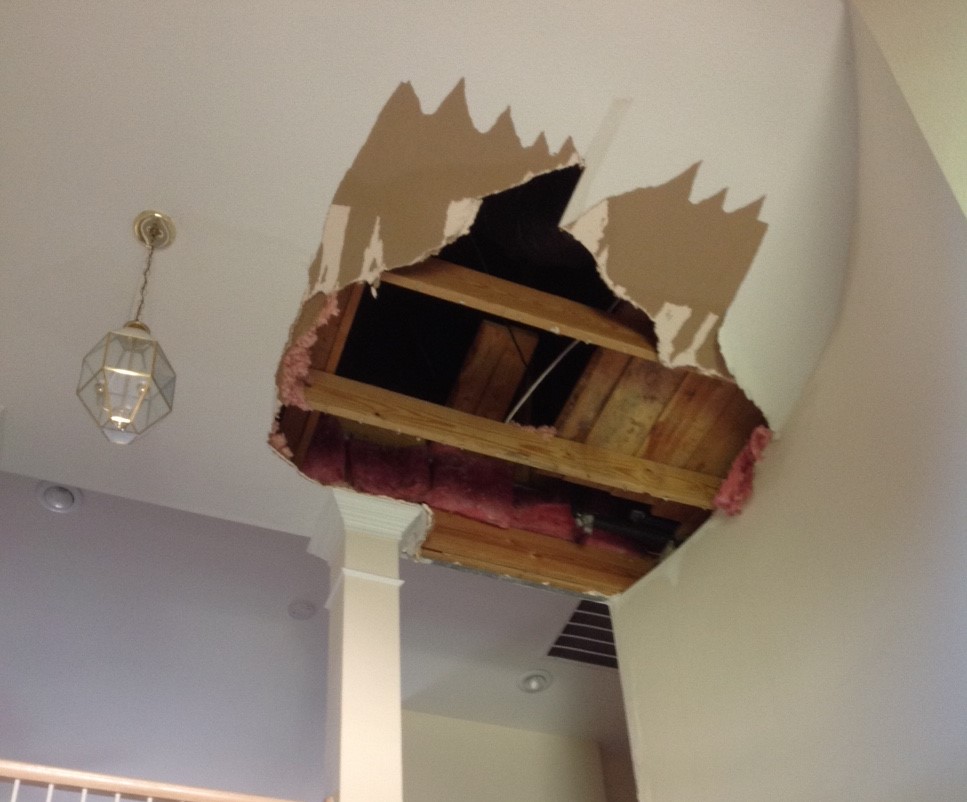 What happy days they were.

Thanks guys. Why does this stuff always happen on a weekend? It doesn’t seem to be an active leak, but I’ll call a plumber this morning and deal with whatever weekend rate penalty I must suffer.

I’m also a moron. You need to find out where the leak is so you might as well make a hole yourself.

You seem to have a slow leak so it’s not pressure, that probably means it’s from ‘exhaust’ leaving the tub or whatever. Around the sides of the tub, or the pipe that lets the water out of the tub. If you have those stupid jacuzzi rubber things those leak too.

I keep around some JB Weld steel putty to quickly patch little holes in metal pipes. I’m not sure what you do with PVC pipes thought. I guess some self-fusing tape. Warning, this is only non-pressurized (exhaust) pipes! It serves to patch things up till a professional comes to permanently fix it.

Oh yeah, after this you’ll want to figure out where you can close all the water pipes in your house. Like the ones that go outdoors for the winter, cuz they ice up and then they’ll leak when you turn them on in the spring. Also for emergencies. It’s really bad news to go close that water valve and break it while closing it… I may or may not have done all these mistakes recently.

As for finding someone to trust… Chat up some neighbors, ask if they like who they use for services like garbage collection, gardening, etc etc. Last time I needed a good plumber I went to the hardware store near me and asked them if they knew a guy. Owner turns around and they start discussing “Hey, do you know a plumber who isn’t too much of a crook?”

Incredible stuff. Always have some around.

I’d recommend to going to a local independent hardware store for a referral list. We had one at the Ace where I used to work. I knew most of the guys on the list. Aces, Hardware Hank, TruValue, etc… are all co-ops and are independently owned. If I lived in the neighborhood I’d come over and take a look. It sounds like you have a slow leak somewhere.

You want a combination of a plumber, and some sort of mold/water damage assessor.

We’ve had fairly extensive water-through-ceiling problems in rentals in the past. Most probably a grout line that has gotten old or cracked and is leaking water through, but maybe a pipe has a small leak too, but I doubt it’ll explode down on you so you can relax a bit till the pros arrive. Just be happy it’s in your home and not between rental units to two landlords who hate each other’s guts, and a third party agency that should take care of these things but couldn’t care less about you. 'Cause that scenario kept us waiting on repairs for months, with an active leak into the middle of our living room every time the tenants upstairs showered.