What gives you hope?

With the daily barrage of alarming news and 24/7 outrage, I find myself more committed than ever to focusing on the things that give me hope. It is a choice to do so, and in doing so it prevents me from becoming discouraged or demoralized and therefore less capable of making my contribution to a more just, sane world.

I am curious what gives you all hope and the motivation to do the same?

Here are a few things that I carry:

By no means do I suggest we put on rose colored glasses and pretend that the concerted, coordinated attacks on the pillars of democracy can be wished away. Rather, I choose to be hopeful so that I can do my part in preserving and improving upon those democratic institutions.

Maybe this post is a silly idea and will go nowhere, but I’m counting on this crew to be a hopeful bunch and I’m hoping to hear what gives you reasons to be hopeful.

I think for many people it is easier to fear the future rather than to have hope in it. Kind of a half full/half empty approach.

If you take an 11pm news show view of the world you will lose hope. Better to change the channel.

What gives me hope is that, no matter how dark the night is, the sun always rises again.

Of course, one day it won’t. Or, being more specific, it will rise but won’t go down because it will engulf the Earth and obliterate it. But when that happens none of us will be alive anyway, so it’s just a technicality.

My first phrase still stands. No matter how bad things are, every new day brings with it a new hope.

Did I ever mention how one of my favorite Isaac Asimov short stories is Nightfall?

If you’re familiar, which I suspect you are, you’ll understand the only half serious reason I mention it ;)

Living in CA and video games.

I am not familiar with that particular one, but I’ll look for it.

BTW, I’m reminded of a Persian proverb I heard once. “The night hides a world, but reveals a universe.”

Oh that’s a nice one.

Short version is that, even when you know the sun is coming up again, things might not be familiar when they do.

Short version is that, even when you know the sun is coming up again, things might not be familiar when they do.

Well, I like to think that the big success of our species is in its ability to adapt. There are tons of people who might fear the unknown and the unfamiliar, but there are also many who embrace it and learn from it. That’s another thing that gives me hope. ;)

In the long run, decentralization will beat out centralization due to the impossible challenge of trying to gather ever more information to make centralized decisions.

Therefore, liberty will tend to increase naturally, which will increase human potential.

Accepting this has made me a lot more optimistic and I tend to fret less about the news.

Pinker’s Better Angels has given me some hope although I know others object to his methodology and conclusions.

I am actually quite sanguine about the survivability of the human species. I think we are way too populous and clever to be in any danger of extinction either from nuclear war or climate change. Maybe a bioweapon could do us in but it would have to be far, far more lethal than bubonic plague or smallpox. That said, I think there could be events that would kill billions and wind back a lot of the political progress we have made since Ancient Greece. I also worry that if we burn through our resources too quickly we might lose the ability to bootstrap ourselves off this planet and eventually doom ourselves to a sort of perpetual Amish world, which wouldn’t be all that terrible, just sort of sad.

The best case for human progress in our time is the old Trek Two Step. 1) Achieve relative peace and prosperity on earth, and 2) Having attained this stable platform, move on to space. I think 2) is still important, however/whenever it is achieved, because otherwise there is a ~1 billion time limit on known intelligence in this universe. Granted it’s all just putting off the inevitable heat death anyway, but hopers gonna hope.

Anyway, my faith in the Trek Two Step (or Sagan’s Dream, to put the same idea in slightly different clothing) has been almost completely eroded by the past couple decades of history. I don’t think we are wise enough to pull it off. I think we will muddle and some of the wealthiest of us might even get off this rock. But ‘we’ as a collective, as the totality of the species, are I fear in for a rough ride. I hope I’m wrong. 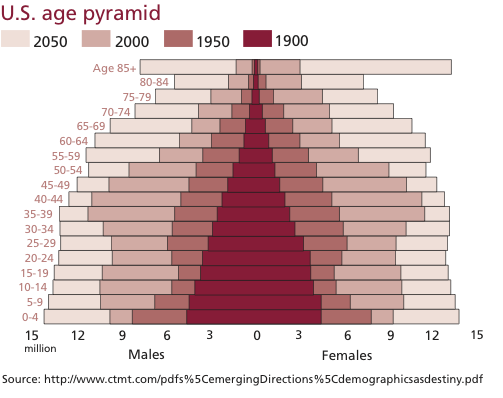 Turns out, despite what Whitney Houston said, children weren’t the future. Old people are.

What a terribly difficult to interpret graph.

Yeah, I had to stare at it a long time to make much sense of it. Unless it’s actually a graph about time travelers, in which case the number of people among us from the year 1900 appears to be growing. Or maybe shrinking.

It’s clearly an empty vagina without any more young people coming out of it.

Yep. Another reason that Congress needs to tackle immigration reform with a path to citizenship. More youngsters helping to shoulder the load us oldsters can’t bear ourselves.

It seems like demographic panic has been a thing for a long time. Augustus tried to use the force of law to get Romans to make more babies.

What a terribly difficult to interpret graph.

Old people are the future, both in the US:

And in the world: 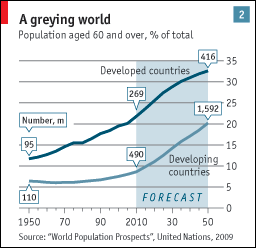