No, they never did. You have to wait about a year to get flying for every new expansion that comes out and it’s a grind to get it.

What does it say about me that I’m only interested in the improved character customization options?

I’m not the only one who feels this way! 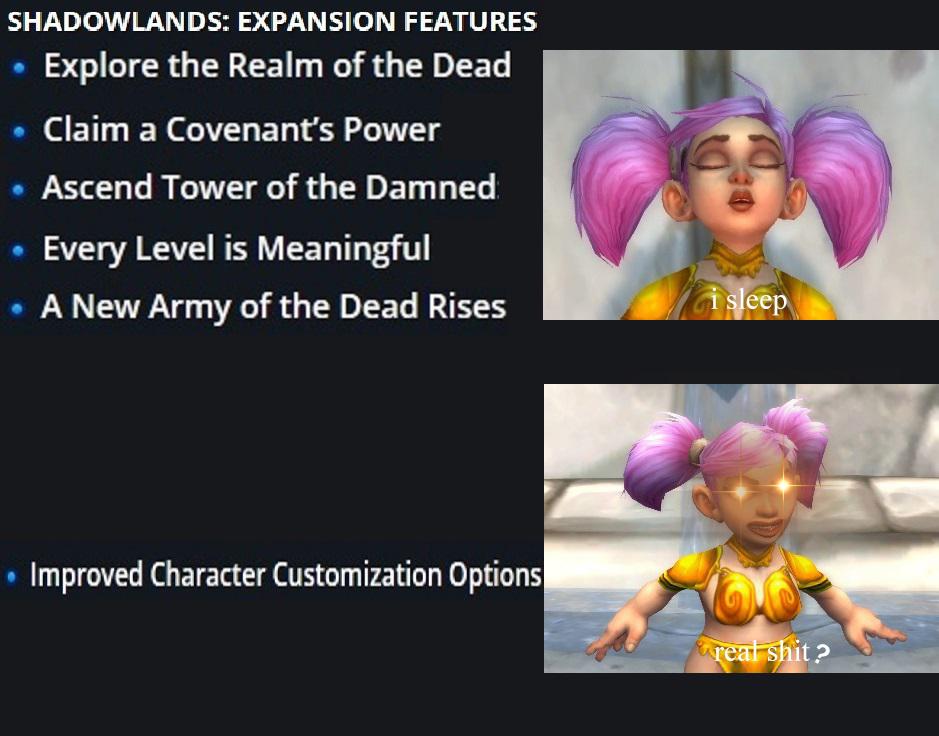 Well, that’s me out then. Cheers.

Here I am going through Pandaren content and not knowing this (because I can fly right now.) Ugh. Still, I’m having fun.

One thing is for sure, Blizzard takes this shit away too seriously. Gone is the joking fun of yesterday’s quests. Now every story must be world changing and of lore importance.

What happened to the old ways?

Uh, what? There’s an entire sequence of quests where you train a young pandaren to cook food.

Then you get to build your own personal farm and customize it by making friends with everyone in the village.

Sorry, I meant I’m having fun in that expansion right now. I got the feeling @malkav11 is talking about after that (and I have a slingshot level 100 and 110 so I know) they aren’t NEARLY as cool as areas. Again, I haven’t seen the full effect of anything since very early Cataclysm. I’m getting through them quickly though. I just think Pandaria is fun.

Here I am going through Pandaren content and not knowing this (because I can fly right now.)

Yeah, the WoD expansion is the first one that gates flying so you’ll hit that after you hit 90 in panda land. WoD is also the absolute worst one for grinding out flying. It’s so draconian that I have flying for every zone you can unlock it in except for that one. I keep thinking that one day I’ll go back and grind out all the needed achievements to get it but every time I take a look at everything you need to do I just say screw it.

Mists of Pandaria was probably my favorite xpac. I loved the farm quest stuff, as well as the theming of the zones feeling extremely unique when compared to other expansions.

Looking forward to the stat squish, that means I can level alts in panda-land and have some fun re-experiencing that content.

Big fan of the choice to switch up leveling again. The changes for bfa in terms of leveling was no good.

The treasure chest achievement was a moment I felt the developers hated us.

Wrath is my all-time favorite, but for leveling I really enjoyed Mists. It’s an expansions that ages better once you can ignore the big content drought.

The treasure chest achievement was a moment I felt the developers hated us.

Yeah, all the other requirements are bad enough but to include that one too was a gut shot. It’s made worse for me because I never played that expansion. I left WoW after Wrath and didn’t come back until BFA. So, I probably would have gotten though it all if I’d played the expansion when it first came out but now? Hell naw.

I actually enjoy going though WoD with alts though, even without flying. I love the garrison and mission systems there and in Legion. So much more fun than BFA. The mission system in BFA really sucks in comparison and there’s no garrison or class hall there at all.

Yah, I don’t mind the Legion/BfA Pathfinder. The rep grind is a PITA, but there is a way to do it without it taking over your play time, but it takes longer. I just did the daily for Mech, and the emmissary for Naj. It took a few months, but that was fine.

As an aside, the wailing over the level squish has been a riot to read.

As an aside, the wailing over the level squish has been a riot to read.

What’s the complaint? That Blizzard is devaluing their hard-earned levels?

What’s the complaint? That Blizzard is devaluing their hard-earned levels?

Me, I am looking forward to it. It can’t come soon enough.

That was no problem while the expansion was current (at least with an addon for locations). The rep grind in Tanaan, on the other hand, is still godawful.

I’m still a big WoW fan, but I don’t understand why they force people to grind the WoD and Legion flying achievements. Those should either be made painfully simple or just removed all together. Maybe that’ll happen with Shadowlands.

I still have trauma from repgrinding the netherwing mount and argent tournament crusaders factions.

Tanaan you can get rep tokens on the AH, and with over-leveling the content it’s pretty easy to grind out the reps.

The content isn’t challenging like it used to be, but it’s very very slow and it’s hard to just find enough rares to get the quest that’s the only source of rep for one of the factions done. Or at least it was back in Legion. I had no interest in BfA and Shadowlands seems fine but until they come to their senses about flying… nah. I have other MMOs that better respect my time and tastes.