Huh. You’re right, I can’t find it anywhere on the rewards page anymore.

Keep in mind, I first said “to hell with this” back about a decade ago for Microsoft points when they stopped offering Xbox currency as a reward. And yet, it got added back eventually (I have no idea when, since I stopped paying attention to rewards until @divedivedive kept bringing it up).

So it’s possible that they’ll bring it back like they brought back currency.

Also, Xbox Live Gold is still a reward, and that can be converted into Xbox Ultimate. So there’s still an avenue there.

I still see Game Pass Ultimate available for 3 months at 35,000 points, is that not what you’re talking about?

Rewards get removed for awhile if they run out of them.

These are the only 3 xbox related rewards on my rewards screen: 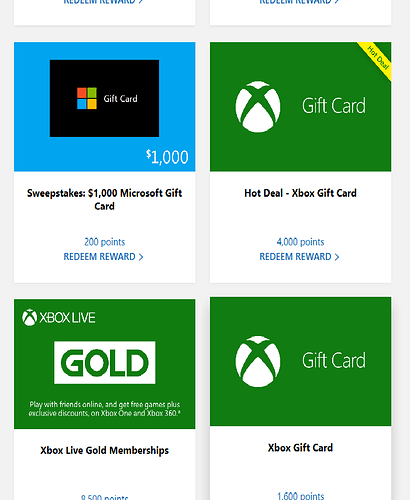 That is all I see too. It might not matter, I went to sig up for the 3 months of game pass for $1 deal but even though I have Microsoft credit to cover it, it is forcing me to put a credit card in.

I got around that by putting in paypal. Functionally the same, I suppose, but it’s easy to reverse/cancel on the paypal website. 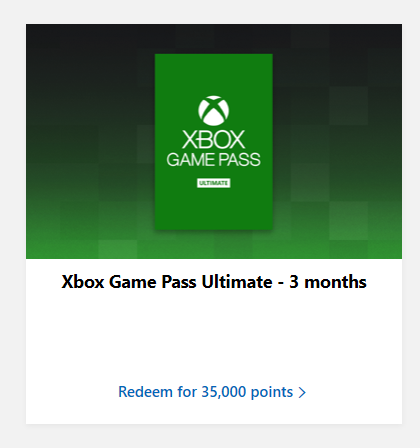 MS Gift cards are on sale this time.

I had no idea gift cards ever expired. I need to start reading fine print.

Hahahah. Has anyone fired up the Xbox Game Pass app today on your phone? For March it looks like they drastically reduced rewards for doing Game Pass quests. Like checking into the app daily and playing a game pass game daily went from 15 points to 5 points. And finishing a bunch of quests for the whole month went from a reward of 1000 to 100 points. So basically it’s not worth loading up anymore.

I’m actually kind of relieved. Firing up a game pass game every day, trying to get an achievement in one every week or so was starting to feel too regimented. Now I can still do those things, but on my own time table.

Sucks they dropped the rewards to 5 points, not worth doing now.

This guy says they’re back. I haven’t verified these claims. 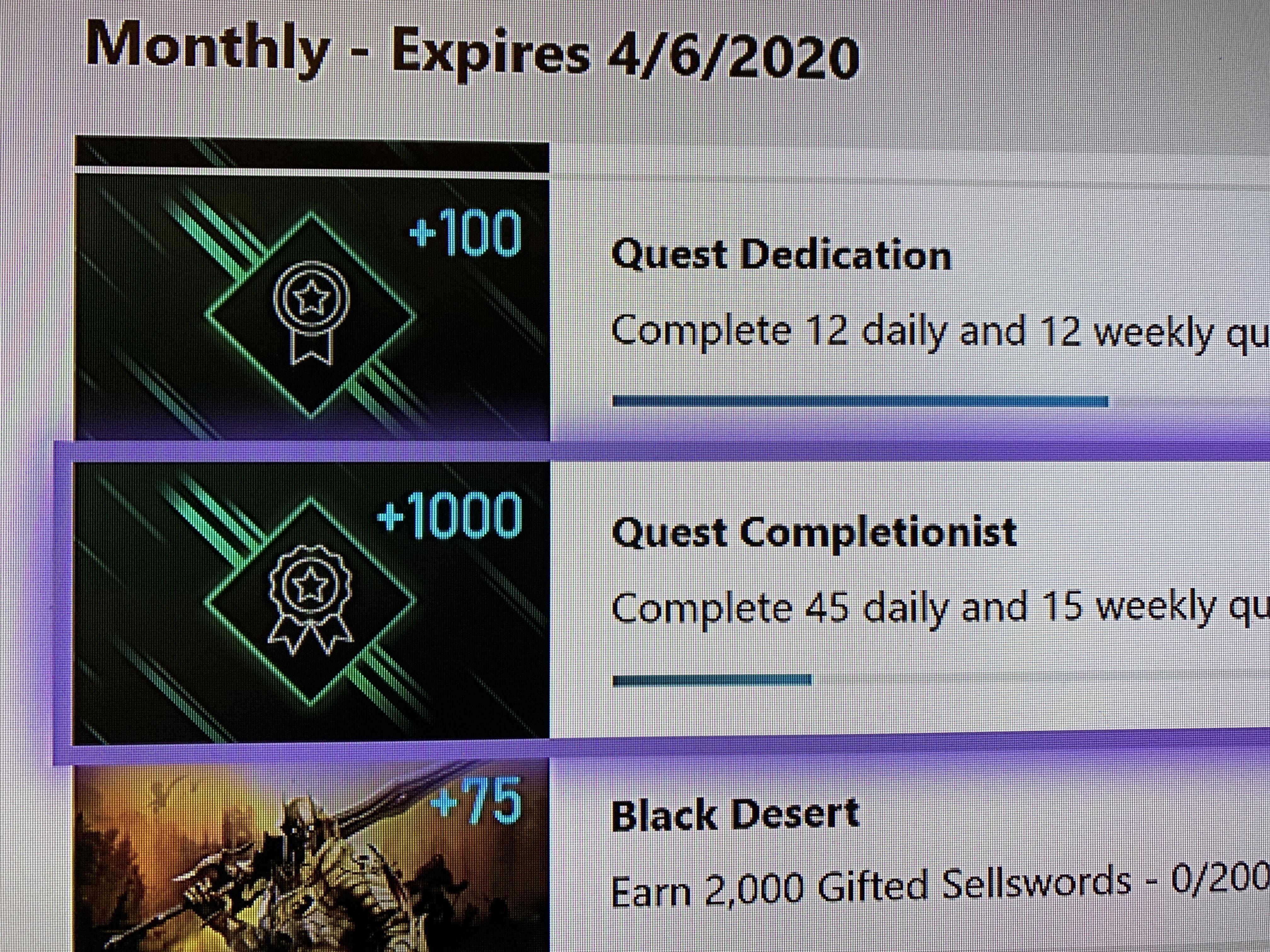 True Achievements says they are increased, but not fully restored.

The new weekly Xbox Game Pass quests are now live. We've got the roundup of every quest on offer, how to complete them, and how many Microsoft Rewards Points you'll get for doing so.

The 3 month Game Pass Ultimate subscription reward has been reduced, looks like 29,400 points is the baseline with possible further reduction based on your monthly level.

Note however, that if 12 months of Xbox Live Gold go on sale for 22500 about twice a year, that’s a better deal, because it translates to 4 months of Ultimate, and obviously 22500 is less than 24500, and you’re getting an extra month for it.

On the other hand, maybe they’ll stop having those sales on 12 months of Gold now?

I didn’t get the option to get a free month for turning on recurring billing. I guess Microsoft is onto me about that. Heh. Still, this puts me at 2 years out once again.

Americans have a new offer in the xbox app. Easy 2000 points.

Everyone should also have a Gears 5 card for 500 points. You have to earn an achievement, but there’s a new crafting one that takes < 5 minutes. Grab this at the same time:

Earn the Batista Bomb in Gears 5 for a Limited Time, Here's How - Gameranx

Wrestling and Gears fans will be happy to find out that the signature 'Batista Bomb' move will be added to Gears 5. Here's how to earn it.

Not sure if someone here was still exclusively getting Xbox Game Pass for PC rewards, but I noticed that after a long absence from the rewards page, it has started showing up again recently as a reward you can get.