Anyone drawing on tablet?

So, I upgraded my recent tablet purchase to a Samsung Galaxy S7 Plus, and its awesome. I also want to try out digital drawing, and has signed up for an Udemy class so far.
Weirdly, even though it IS digital drawing, they use photoshop for pc. So, I kinda assume they use a tablet connected to the pc?

Does anyone have any experience drawing on tablets (Android), and can recommend a good guide and perhaps a few pointers? I like the udemy course, but them using photoshop which I dont have, leads to a lot of issues with me not knowing what brush to use for instance.

Artists that are Mac/PC based use Photoshop hooked up to (usually) a Wacom Cintiq tablet. People who want a portable solution use an iPad with Procreate.

On Android, I think your best option is AutoDesk’s Sketchbook app.

Thanks - I am using Sketchbook right now. I started out using Krita, but seemingly its an early access sort of thing, where they just ported over the pc version and slowly is making it work on android.

I just am kinda confused why people connect it to a pc and of course why that part isn’t mentioned anywhere, in either the course on Udemy, or anywhere else I looked.

The Wacom Cintiq isn’t a tablet in the way a Samsung or iPad is. They are more like gigantic touch sensitive screens/input devices. It is a basic to an artist’s workflow as a mouse is.

Other than apps like Procreate, there just aren’t a lot of digital art creation tools that are tablet-native.

BTW, look at Huion tablets on Amazon instead of Wacom. They’re muuuuuch cheaper.

I do have a tablet already, but thanks :-)

The Wacom Cintiq isn’t a tablet in the way a Samsung or iPad is. They are more like gigantic touch sensitive screens/input devices. It is a basic to an artist’s workflow as a mouse is.

Ah, yeah - I’ve seen those. I do wonder if I can connect my samsung tablet to the pc as well - I guess the internet knows!

BTW, look at Huion tablets on Amazon instead of Wacom

Geez, I had never heard of this company, but I can get a drawing tablet twice the size of my entry-level Wacom for the same price. Are they decent devices quality-wise?

My last 5 tablets have been Wacom but the reviews seem good w/o knowing how many are astroturfs. I can afford to try my next one being $100 CAD for a medium-sized one that would cost 3x that for Wacom.

Are they decent devices quality-wise?

I have an XP Pen 16". It’s fine, does what I need it to do (and I like it). My two quibbles are the pen doesn’t come with a felt nib, so you don’t have that extra bit of friction, and the screen is straight up glass (as is the Huion I believe, they probably get their screens from the same factory), rather than having a slight matte texture I remember wacoms having for better pentip grip, although you probably get better screen quality without it (haven’t drawn on a centiq for over ten years though so maybe things have changed.) The bonus of my XP Pen being a nice screen is you can tilt the stand down all teh way, and the screen stands almost vertical, so you can use it as a second moniter… my daughter has been using it for home schooling on the chromebook. The stand also let’s it sit very nicely at whatever angle on your lap (hooked up to a laptop or whatever with wires) if you want to draw on the sofa without killing your back.

I use almost exclusively Clip Studio these days, it’s just so much better geared to drawing and digital painting than Photoshop. Sketchbook is very nice for quickly … well, sketching, but when you want (comic style) panels and borders etc, it starts to show it’s limitations, I found.

What’s great about all these programs is you can actually buy them for a normal price, unlike Photoshop which is an expensive subscription that can’t be justified if you’re just a hobbyist or doing light freelance.

By the way, a lot of my friends use Ipad Pro or MS Surface to have that easy to throw in a backpack functionality, since they are actual computers, although with the ipad you’re locked into their restrictive ecosystem, I guess.

Some iOS apps that exist for both macOS/Windows and iOS allow the iPad/iPhone to act as a tablet for the desktop version. It’s been a while since I’ve looked at the ecosystems and identified which ones though.

Also, don’t forget you can use Apple Pencil on iPad/iPhone with a MacOS computer via SideCar.

As someone who has both MacOS and Windows currently, I am investigating if an iPad + Pencil or Huion is the best option for me in terms of apps-I-would-use-support vs cost. Yes, the iPad is the costliest option but I have a Pencil lying around still.

I just got my girlfriend a Huion 16 but she had to go out of town on a trip. I’ll see if I can get some impressions in the next few days. It’s an impressive looking device, but we haven’t hooked it up yet. It looks like it needs a HDMI, usb, and power. If you’re over USB-C like to a Macbook or imac, it only needs USB-C and another USB-C to a power adaptor. I’m impressed that this thing was only $400ish. It’s huge.

Well, I did complete the first round of the course I am taking on Udemy. Other than not always understanding what brush to use, I think it went reasonably well - The Samsung S Pen is pretty good, but then again, I don’t really have anything to compare with.

But this is the result of my very first foray into digital drawing! 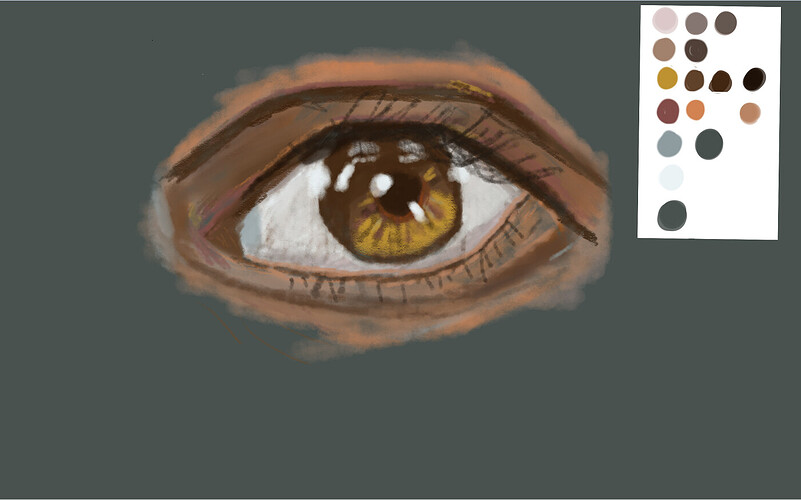 Which software are you using? I have a Huion on its way for my daughter and we’re looking at using the free 3-month trial for Clip Studio Paint to see how she goes.

Funnily enough I also just bought her a Udemy course today (since there’s a sale on) and I think I remember seeing one that involved drawing an eye! Yours looks great.

I was originally trying out Krita on the tablet, but it had a number of issues, so I am using Autodesk Sketchbook which works very well ,and is very easy to use.
For some reason, I also have a 3 month license for Clip Studio which Samsung apparently gives to all owners of the tablet, so I was considering that as well.

The Udemy course has the extremely humble name “The Ultimate Digital Painting Course - Beginner to Advanced” - the eye is the intro!

Edit: Sketchbook is free - I think there is a “Pro” version somewhere, but I haven’t seen anything yet that is locked in the version I am using.

Edit: Sketchbook is free - I think there is a “Pro” version somewhere, but I haven’t seen anything yet that is locked in the version I am using.

They made Pro free.

Which software are you using? I have a Huion on its way for my daughter and we’re looking at using the free 3-month trial for Clip Studio Paint to see how she goes.

Half off until 15th: 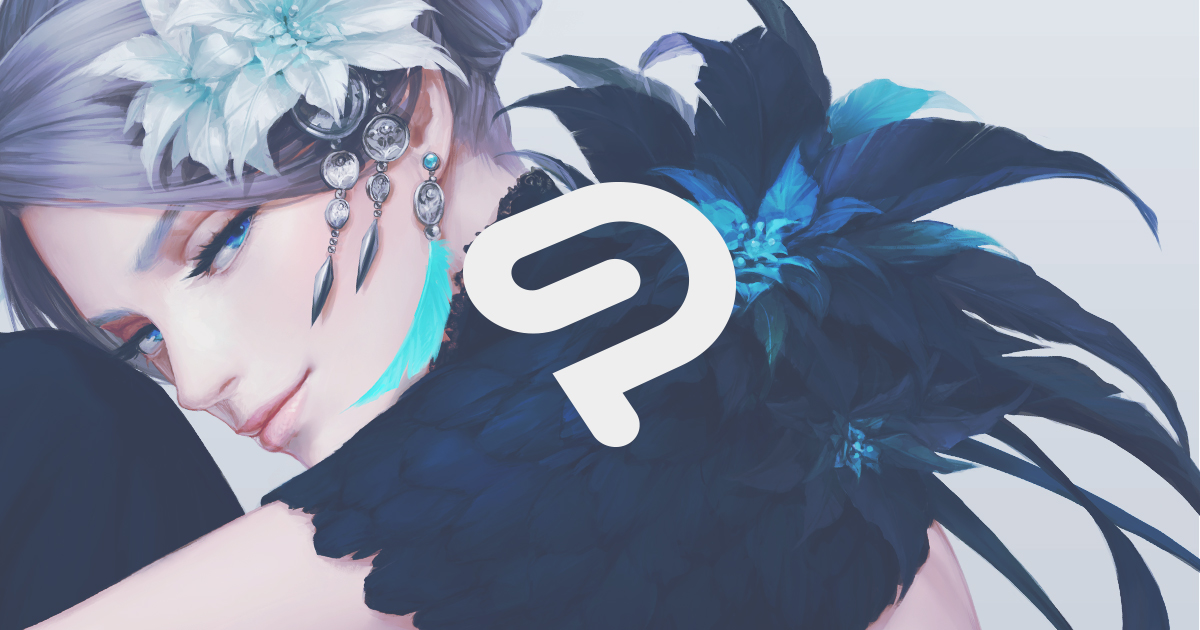 Purchase Clip Studio Paint, graphics software and app for illustration, comics, manga, and animation. The single-payment version for Windows and macOS can be purchased online.

On Android, I think your best option is AutoDesk’s Sketchbook app.

Thanks for the tip. I can’t draw worth beans but I do have a Samsung Galaxy Tab S6+ so I tried some doodling on Sketchbook. Poking at the different icons, I found the time lapse function which basically turns your drawing session into a movie clip. My six year old daughter has used that to make a video birthday card for her cousin with the card sketching in. She’s really proud of it, and I am proud of her for the work she put in. She practised sketching the card repeatedly before we did the recording and did it one take.