I’m up for anything.

I’ll pass, don’t think I’ve got the headspace for another big sync game at the moment. Thanks for asking though @Valambrian!

Sob. Did @BloodyBattleBrain get more time on his hands now?

Did @BloodyBattleBrain get more time on his hands now?

Our 14 day quarantine ends soon and we will move into a larger, fuller, better equipped location, with our own private rooms.

At which point I should, theoretically, have enough time (and a desk) to play longer time games, like planet fall and AoW3.

Currently I’m playing Slay the Spire, because I can balance the laptop on my…err…lap, when I’m in bed.

Thanks. I appreciate the thought.

I think, overall, we’re probably among the safest right now.

Our food is brought to us.

ALOT of us are starting to run low on shower gel etc, so I think the plan is to organise a shop run for a group of us at a time.

So I don’t see us getting much exposure to anyone.

Will be curious to see how our mission will be implemented.

We definitely live during interesting times.

Had many fights this turn, got a couple of animals out of them. Shut down a monster spawn site - they should practice social distancing. Lost an expert martyr, he won’t be reborn as an exalted. My mistake - I should not have commanded him to absorb pain of a unit who was sent into the thick of the fight.

Sent a hero to deal with a hostile orc outpost only to find that @Thraeg got there first. I was hoping he’s not interested in the squabbles of the surface world.

Hired a hero (my god, is she a high maintenance lady!). Money spent caused some plans to be put on hold, and, I’m afraid, it will have repercussions for at least a few more turns. Will sell all trash magic items, but they will not fetch a good price.

Need to build watchtowers to make sure marauders will not arrive unnoticed. I just have a feeling they might. Will keep my fingers crossed until the next turn.

I was hoping he’s not interested in the squabbles of the surface world.

If the surface world would leave me alone, I’d happily leave it alone. But marauders kept wandering down into my caves from up above and attacking my cities, so I popped up to clear a little breathing room, and the town was right there.

I was hoping he’s not interested in the squabbles of the surface world.

If the surface world would leave me alone, I’d happily leave it alone. But marauders kept wandering down into my caves from up above and attacking my cities, so I popped up to clear a little breathing room, and the town was right there.

It wasn’t a complaint, just a lamentation.

A few easy fights, not as many as during the last turn. Mostly finished clearing treasure sites within my settlements’ bounds. Marauders didn’t appear, probably @geggis took care of them. Time to build a stack for a new hero, but we’ll have to see whether money will allow to do it any time soon. Sold trinkets, but, as expected, they didn’t contribute significantly to the bottom line. One more city had to switch to producing merchandise in order to help with the plans. Still can’t research “summon lesser elemental” that I am waiting since the start of the game.
Tried a trick I didn’t know about - apparently, you can dump extra knowledge points into a spell and they don’t disappear when you switch to research another spell. It didn’t help in my particular case, but if I still had a bunch of cheap spells, it would be possible to research them in starts and stops, whenever ancient ruins or a lost library is explored.

One thing I’d love the game to do is to keep information about guardians of all structures I have ever peeked into instead of having to rely on screenshots. @BloodyBattleBrain, @Mysterio, does Planetfall make it easier to track this kind of information?

From memory, no, but that is a good idea.

One thing I’d love the game to do is to keep information about guardians of all structures I have ever peeked into instead of having to rely on screenshots.

Good idea! But I never thought to take screen shots. Heck, I’ve never employed the strategy to peek, either!

does Planetfall make it easier to track this kind of information?

Not that I’m aware of.

A quiet turn. Just a single hero had a fight, cleaning a treasure site. I decided to keep the reward, even though I’m not sure it will ever be useful. FOMO, I guess. Money shortage continues, with one more settlement having to switch to producing merchandise. The silver lining is that the settlement auto-completed the building it was constructing, so at least it gets the +50% to income. Sold another minor magic item to keep building a road. Not having a good road coverage slows down my travelling heroes, and this is NOT GOOD™.

Another quiet turn. It looks like @geggis didn’t kill marauders I was talking about a couple of turns ago. Apparently, they just moved away but now decided to kill themselves against one of my heroes’ stacks. Luckily, none of my units died. Which cannot be said about a fight I initiated. I took over a watchtower at the cost of two tier 1 units. I can’t even!
Killed roaming scoundrels, but a celebration would be premature - there is a Titan and his merry band in the vicinity.
Money (or lack of them) is still an issue, but one of the settlements was able to pause merchandise production in order to queue training an evangelist. This will be my first one. In our previous game, @Thraeg had an evangelist by probably turn 20 and by turn 43 had like 20 of them. In my defense, I don’t see too many good targets for evangelists to convert.
Speaking of @Thraeg, is there a chance for a second turn today?

My turn went well. New settlements are popping up, and I am almost ready to start the process of building new units.

So far, I have been reliant on animals and hunters.

Would not mind seeing more turns today, just to see what else I can do.

Another thing I’d love the game to do is to give an indication of how does the settlement’s placement will affect its output. In Master of Magic you could mouse over a tile and see how large the town can grow if built on top of it. 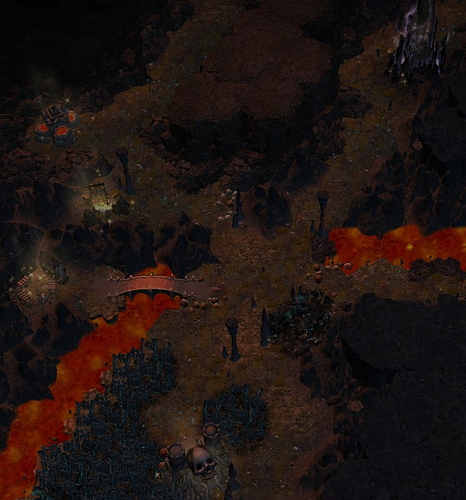 I understand that AoW has many more factors affecting a city’s output, but wouldn’t it be nice at least to see distances to treasure sites in the vicinity? For example, I want to build a city in this corner of the World. Does it make sense to put the city next to the gold mine because the major sites are too far away? Or should I found a settlement closer to the major sites to reap bigger benefits? Yes, I can count hexes on my own. But helping players, especially newer ones, to make decisions, would be great.

Yeah, I’ve been doing a fair bit of hex counting across the board! Chaos Reborn has spoilt me!

My turn before last was rough. Lost a couple of units and a hero in one battle. Lesson learnt!

That’s fine, everyone makes mistakes from time to time. What’s important is that you can make a perfect turn now!

I’m annoyed by how little perks my capital city has. There just isn’t much around it.