It is a wildly addictive game if you click with it. It consumed the better part of my summer/fall and I had to step back and catch my breath because I was doing nothing for awhile except play Ark.

It consumed the better part of my summer/fall and I had to step back and catch my breath because I was doing nothing for awhile except play Ark.

We’ve all been there. I still get phases of it. “I should port over to the other server in ARK and set up a base from scratch.”

(I should add that it was glorious however lol)

You know I’m so glad we had this nice cluster to play on and if you have any notion of playing, you should do it here folks. The other maps don’t just add new scenery to an already big game. Several of them have specific gameplay changes that really mix up the game play loop. Genesis, Extinction, and aberration all play a LOT differently from the stand Island fare you have probably seen so far. They are all entertaining and it is interesting to me to see how minor changes in the environment of Ark change up the gameplay.

Haven’t read the whole thread, but I’m playing on Xbox, is the server crossplay? Wouldn’t mind playing with you guys again

edit: just caught the bit about steam only, bummer. really diggin the game but dislike playing on public servers or 100% alone. quite enjoyed the conan group we had awhile back

Xbox crossplay only works with the Windows Store version of Ark, not the Steam version though. The Epic version works with Steam, but only if there are no mods on the server because the Epic store doesn’t do mods atm.

I believe the comment from a long time ago was WildCard had crossplaying working internally (using dev/debugging tools & modes) for all platforms but Sony/Microsoft/Steam/Nintendo don’t want their networks to play well with others, so cross play only exists for Xbox & Windows Store versions.

It honestly kind of sucks too because the game could really use more players able to see/reach each other.

Will it be the same as ground movement speed? That is to say, it’s a wasted stat during mutation and only makes a different when levelling it up after you tame?

Need to test to see if imprinting increases the base movement speed though, like it does for land dinos.

The “Allow flier speed leveling” option has been enabled on all the servers in the cluster.

Now it is time to see if leveling movement speed stacks with a trope’s afterburner speed.

Haha that moment when youre moving to fast to see the mountain in front of you.

Unfortunately it seems to not remember your movement speed upgrade whenever you transfer servers, so putting 40 points into my owl is pretty impressive but then when you go to another server you have to put those 40 points back in again. I wonder if it’s an issue on Wildcard’s side?

Edit: Actually it’s not changing servers, it’s just the act of using a cryo or dino pod or using dino storage that resets their movement speed. At least you get your points back!

Glad to see them add this back. It’s the one thing I truly miss from the Classic Flyers mod. Hell, besides graphical changes and “step back,” that mod is almost not needed anymore.

Dinosaur fossils could belong to the world's largest ever creature

Experts have uncovered the remains of a gigantic dinosaur in Argentina, and believe it could be one of the largest creatures to have ever walked the Earth.

I heard @Ragan already has this guy tamed.

In all seriousness though, estimated over 110 tons. That’s absolutely gigantic. To think there was enough of a food source to support many of those is crazy.

My big wonder/question for dinosaurs like that is how their bodies managed to pump blood up to their head. Or even just plain stayed alive and mobile. Blue whales eat like 4 tons of food a day, but they top out at 180 tons. If we make a rough assumption that titan eats a guesstimate of 3 tons of food a day (the titan is 61% the size of a blue whale, but it has to walk around, so assume that takes more calories), that is a lot of vegetation. Three tons of leaves, bushes, every single day for each dino. They probably has to move in a migratory pattern (and it probably was a huge pattern), eating as they moved.

Since we are usually riding dinos in Ark, we rarely take a moment to stand next to one and see how truly huge most of these animals are. I’ve been using giga’s lately (thanks @greywind) and my character barely reaches their ankle.

And yes, I have tamed a couple Ark titanosaurs before. I haven’t this play through because I’ve not had a big need for huge cargo hauler.

Also a crazy part of it all was the extinction event that left roughly only things around 50lbs in weight or smaller.

Otherwise, we probably wouldn’t be here and some advanced dino would be playing ARK.

Yeah Giganotosauruses don’t fit so well in my 12 story building. 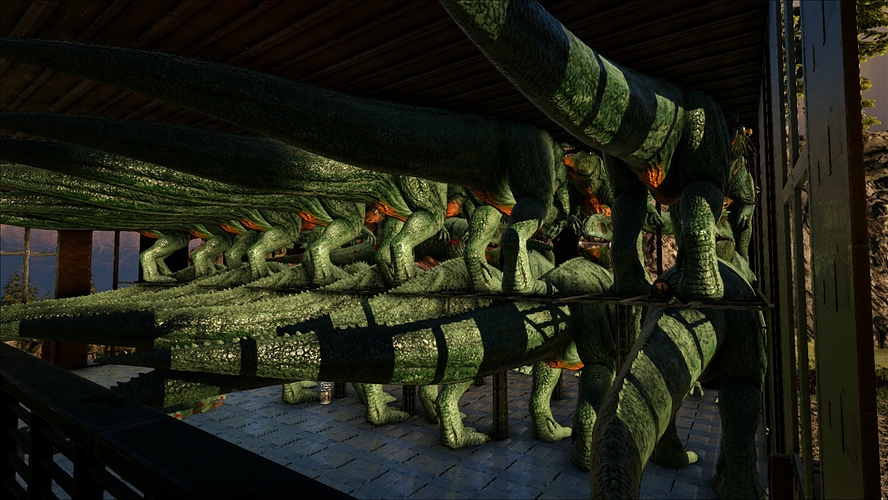 I have 56 of the girls stuffed in the old Rock Drake breeding farm trying to work on mutations. 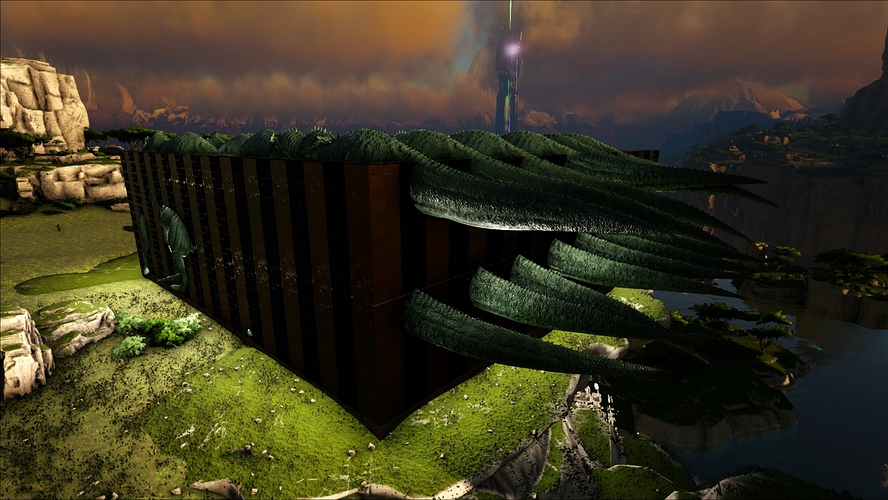 hahahaah Man greywind you have caught the bug. You should maybe try the scaffolding I was using with my rex on your gigas. Will have to see if I have a pic somewhere.

I’m already using your design from your base in Crystal Isle for these (thanks!). The male goes in the middle on a base 3 blocks up, and two rows of females on either side one at ground level and one at 6 blocks. The difference with Gigas is their hitbox doesn’t count their heads and tails, so i can stuff quite a few in there. I have to remove the six females on the ground in the middle each time I replace the male though or it won’t let me place him. 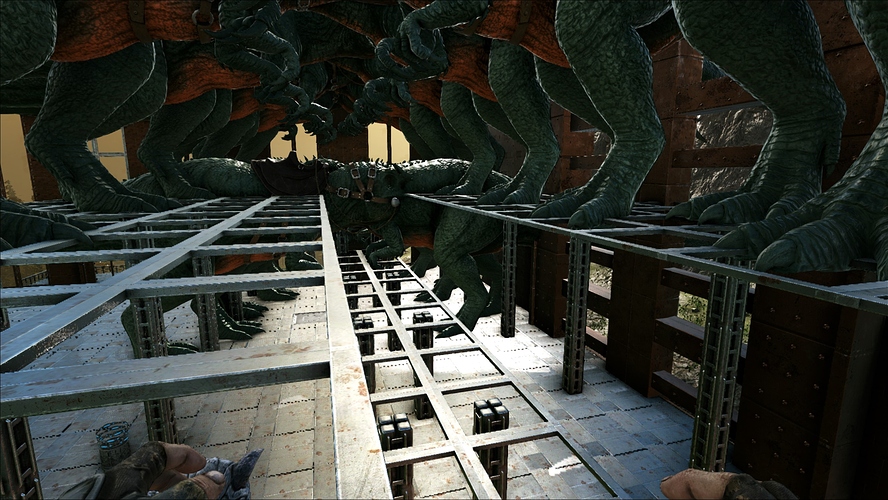