Army of the Dead - Zack Snyder returns to zombies with Netflix

…speaking of zombies/28 Days later, just thought I’d highlight to anyone who missed it that Zach Snyder (Dawn of the Dead/300) is making another zombie flick, Army of the Dead: http://www.variety.com/article/VR1117961772.html?categoryid=13&cs=1

He was going to make an immediate sequel to Dawn of the Dead (there is an unrelated Day of the Dead movie remake, also staring Ving Rhames) but it never got off the ground and he went on to 300. Given that commercial success, he’ll hopefully get the leeway to make a decent budget zombie flick. It sounds from the linked interview like he wants to make something "epic’

“I feel like there hasn’t been a zombie movie on the scale that we want to do it,”

28 Weeks Later (while not a zombie flick persay) is gonna have fighter jets firebombing cities.

Zack Snyder Returning to Movies With Zombie Action Pic 'Army of the Dead'...

"No one's ever let me completely loose," the 'Justice League' filmmaker tells The Hollywood Reporter.

Netflix, which is taking over the project from Warner Bros., where it was first set up in 2007, is going full throttle with Army . The movie is set to commence shooting this summer with a sizable budget that could reach the $90 million range, say sources.

The adventure is set amid a zombie outbreak in Las Vegas, during which a man assembles a group of mercenaries to take the ultimate gamble, venturing into the quarantined zone to pull off the greatest heist ever attempted.

That synopsis pivots from cool to dumb at the comma.

A heist movie during a zombie apocalypse? Well, that’s new, at least. I guess this is the Dead Rising 2 type of Zombie apocalypse where people have moved on with their lives and just take the zombie apocalypse in stride as something they have to live with. That way society still functions on some level, and money still has value, and therefore a heist is still not meaningless like it would be if society had fallen apart.

Kelly’s Heroes but with zombies…brilliant!

Wish we’d have gotten the original premise for Army of the Dead, when it was going to be about the fall of civilization to the “fast” zombies. But that was covered directly by WWZ, I suppose, and there has been so much zombie content since Snyder’s Dawn of the Dead that it’s not surprising plans shifted

This does have the potential to be a great bad movie.

Apparently, earlier drafts of the movie featured zombies raping women and having them have human / zombie offspring (wouldn’t that just be human offspring, or are zombies a new species now?).

Guess time has made them change that aspect of the movie, wonder why, there must be a huge market of people going “If only this zombie movie had more rape in it. And human / zombie babies!”

This was probably during Zach’s “I would have had Batman raped in prison” phase.

Zack must have a thing about this concept.

Guess time has made them change that aspect of the movie, wonder why, there must be a huge market of people going “If only this zombie movie had more rape in it. And human / zombie babies!”

That wasn’t in Snyder’s original version - it was in the draft(s) prepared after he abandoned the project as director (but was still on as Producer, in some fashion).

Blech. The zombie baby stuff was the worst part of Dawn of the Dead, although that was written by James Gunn and toned down by Snyder. Gunn probably deserves credit for a lot of the good stuff in that movie too, however. Snyder did get good performances out of a mediocre cast and did a great job with the action scenes. He’s always been good with action scenes.

Adding this article I just came across. At first I was all, hey cool! I like Tig Notaro a bunch, I bet she’d be cool in a zombie movie! But - the movie was shot last year? So they’ll just be reshooting bits this other dude was in, or superimposing Tig over him or some such? With “lockdown friendly reshoots”? That sounds weird.

You have heard about him, right?

Did you actually read the article you linked too? It clearly explains why they are replacing him in the movie.

Yeah, did I give you the impression that I was confused about the why of this? Because I thought I was pretty clear that what seemed unclear to me was the how.

Survivors take all. #ArmyOfTheDead on @Netflix May 21. Teaser this Thursday. https://t.co/sIgDoz6rmz 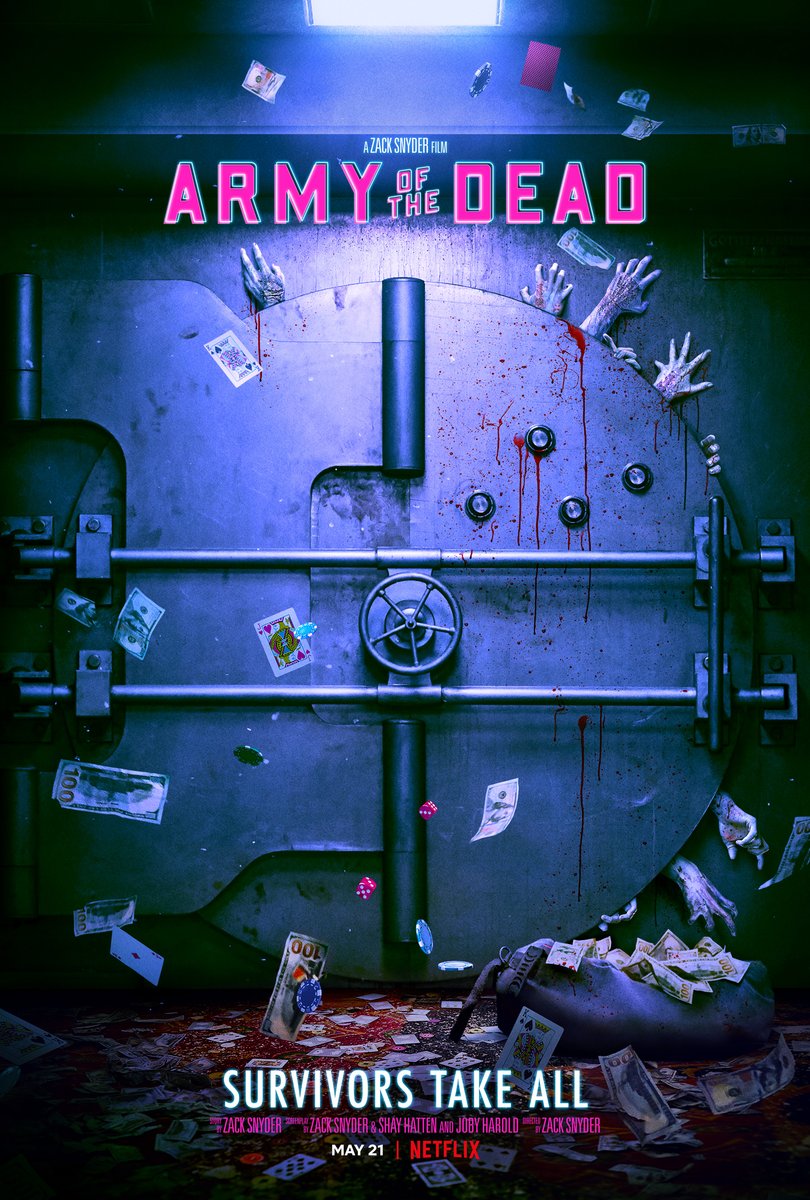