The zalgo title is already my favourite thing about this game. Bravo, @fox.ferro.

So… this game is a mix of RTS with tactical battles. Is that element like in the Total War games? How heavy is the RTS part?

I don’t have a crush on that character. Nope.

She’s not interested, little sun. ;) (you’ll only get that joke if you’ve played Stormblood to the end, though)

But yeah, Y’shtola is awesome.

Psst, don’t tell scharmers about our secret orc massage topic guys!
I confess the weird fetish for big ears is not something I’d associate with old people, but I’m quite disconnected from reality.

I confess the weird fetish for big ears is not something I’d associate with old people, but I’m quite disconnected from reality.

Oh thank god. I thought I was the only one.

Ah thank you! Felswoop mentioned RTS upthread and I’m so bad at those that I don’t really buy them any more.

Foxy compared it to Advance Wars, and it is a really good parallel: you have to fuel your war machine constantly, as units get destroyed all the time (hence the micromanagement).
But it’s very different in many ways. There is even some clearly Old World inspired extra orders mechanics, which is a bit fiddly, but quite effective given the extremely simple UI and means of interactions chosen.

DasTactic compared it to Battle Isle, which I think is an interesting view.

… Oh my, is DasTactic secretly an old Amiga worshipper? ;0

Aww, what happened to my b̸͖̒̊ȅ̴̫͍ā̷͔u̵̫̓̀t̴͎̿ĭ̷͓̱f̴̩͆ͅǘ̶͍l̸̨͕̽̊ unicode?  (╥﹏╥)

The only Battle Isle I played was a bit of Andosia War (mainly because it was a sort-of sequel to Incubation, one of my all time faves). Didn’t feel much like this, though it’s been awhile.

I didn’t play as much of this today as I’d have liked* - one thing I ran into was supplies getting ‘overstocked’ in my factories - like multiple slots getting taken up with e.g. fuel when a single stack of 10 would’ve probably done. Anyone find a way to stop this happening? I ask because I ended up removing a factory and all that stock just got deleted (I think?) which felt like a total waste.

* I thought it’d be a chuckle to take a chunk out of my left hand with a screwdriver. Then I, uh, bought a car. Only minorly related. Consequently ended up distracted most of the day.

An easy way to prevent overprodcution from the bottom up is to manage your energy output input at your base (setting it to 0 will do what it implies). You can also cut supply lines and should rearrange them as to not stock up useless stuff in buildings you don’t intend to produce from anymore; the production will be wasted all over the place, I think, if you don’t.
I haven’t tested the opposite case of the later, since I enjoy making clean production lines so much :3 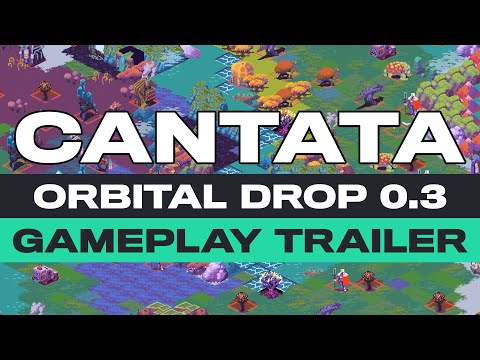 Whether you’re a new or existing player we hope you’re ready for our latest patch - Orbital Drop 0.3. Updates include online multiplayer for up to 4 players, reworked region and supply management, skirmish mode, and much, much more! There’s never been a better time to dive in and enjoy the Grand Tactics gameplay that Cantata offers. Get creative and craft your own scenarios or play through our three hand-crafted story missions!